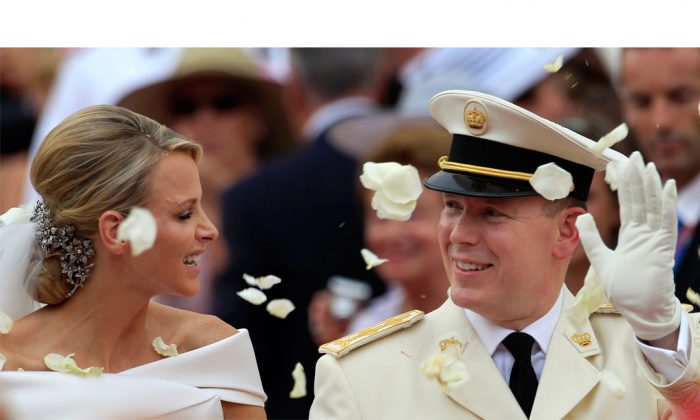 MONACO—For the first time since Monaco was founded in the 13th century, its royal family gave birth to twins on Wednesday, and dozens of cannons were fired to celebrate.

Monaco’s Princess Charlene had a girl first and a boy second, but the boy will be the principality’s future ruler, reflecting the male priority of Monaco’s laws of succession.

The royal twins Gabriella Therese Marie and Jacques Honore Rainier — born to Charlene, 36, and Prince Albert II, 56 — are heirs to the centuries-old Grimaldi dynasty that rules the wealthy principality.

Gabriella was born at 5:04 p.m. (1604 GMT) and her brother Jacques two minutes later, according to a palace statement.

Monaco is a two-square kilometer (0.8 square mile) enclave of ritzy apartments and luxury shops on the French Riviera with a population of around 30,000.

Albert, son of the late American actress Princess Grace, had some subjects worried by his long bachelorhood and his lack of an heir since his two previous children were born out of wedlock and are not eligible for the throne. Then the prince married Charlene Wittstock, a Zimbabwe-born, South Africa-raised former Olympic swimmer, in 2011.

Now the tiny royal state on the Riviera has two reasons to rejoice.

“This is going to create an immense joy. Immense!” said Monaco resident Isabelle Roux. “They are awaited like the messiah. … Everyone is talking only about that.”

“Two babies for the price of one. I think it’s very good for the image,” said Adelaide de Clermont-Tonnerre, editor-in-chief of the celebrity weekly Point de Vue. “With twins, there’s always an extra interest.”

Only one woman has ever reigned over Monaco, Princess Louise-Hippolyte, but she died months after assuming the throne in 1731.

In 2002, with no heirs in sight, Monaco’s parliament quietly changed its constitution to allow royal power to pass from a reigning prince with no descendants to his siblings — potentially Albert’s two sisters. That ensured the continuation of the Grimaldi dynasty, one of the oldest royal houses in Europe, even if Albert never produced an heir.

By palace decree 42 cannon shots were fired to announce Wednesday’s births, instead of the 21 that would boom for a single baby.

Charlene’s pregnancy was announced on May 30, and it was later revealed in September that she was expecting not one, but two new heirs to the crown.

Though these are the princely couple’s first children, Albert has had several children with different women out of wedlock. He has publicly recognized two other children.

Other dynasties have produced royal twins.

The crown prince and crown princess of Denmarkbecame the parents of royal twins in 2011 — a boy and a girl. The boy, Prince Vincent, is fourth in the line of succession, ahead of sister Princess Josephine, but only because he emerged from the womb first.

From The Associated Press. AP medical writer Maria Cheng in London, and Thomas Adamson and Bastien Inzaurralde in Paris contributed to this report.