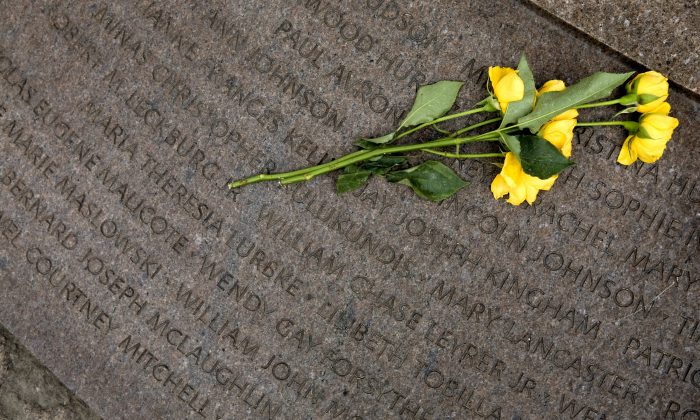 During a memorial service at Arlington National Cemetery December 21, 2007 in Washington, DC. Secretary of Homeland Security Michael Chertoff spoke at the 19th anniversary of the terrorist bombing of Pan Am Flight 103 which crashed over Lockerbie, Scotland. (Brendan Smialowski/Getty Images)
UK

The mom of a Lockerbie bombing victim found out her son died in the 1988 attack.

Carol King Eckersley was searching for her son Kenneth Bissett, who she gave up for adoption when he was a newborn.

She found out this year that Bissett was one of the Syracuse University students killed when a Pan Am flight blew up over Lockerbie, which is in Scotland. 270 people were killed.

Her search was prompted by her husband’s death last year.

She didn’t know her son’s name, because she kept her promise to not look for him or interfere in his life, she told BBC.

“It became a kind of double tragedy,” she said. “I found him and I lost him on the same day.”

Bissett was a junior at Cornell University who was studying with Syracuse University’s overseas program in London.

The flight exploded over Dumfries and Galloway, killing everyone on board plus 11 people on the ground.

“I’m still in the semi-numb part after you lose a loved one,” said King-Eckersley. “Even though I didn’t have him with me physically he was always in my heart. I thought of him pretty much every day.”