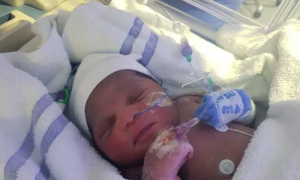 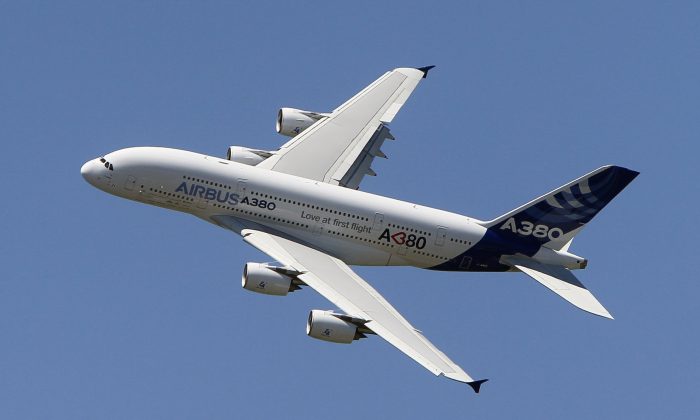 An Airbus A380 performs during a demonstration flight at the 49th Paris Air Show at Le Bourget airport, east of Paris, on June 26, 2011. (Francois Mori/AP)
International

A South Korean woman reportedly handed out more than 200 earplugs, candy, and a note to passengers on a trans-Pacific flight to San Francisco, California.

The earplugs were distributed in case the baby cries.

“Today, I am going to the U.S. with my mom and grandma to see my aunt,” the note said, according to a Facebook post. The note was written from the point-of-view of the baby.

On a Ten hour flight from Seoul Korea to San Francisco, a mother handed out more than 200 goodie bags filled with candy…

It said, “I’m a little bit nervous and scary (sic) because it’s my first flight in my life, which means that I may cry or make too much noise. I will try to go quietly, though I can’t make any promises… Please excuse me.”

Photos posted on Facebook by KGO-TV cameraman Dave Corona show the mom and her infant. He said the child didn’t cry once on the flight.

“On a Ten-hour flight from Seoul Korea to San Francisco, a mother handed out more than 200 goodie bags filled with candy and ear plugs, in case her 4 month old child cried during the flight. A very touching gesture by the mother but as you know when you have kids expect the unexpected. Not a peep out of the kid,” he wrote on Facebook.

Her thoughtful gift has sparked quite the Internet debate.

Some users said the gesture was nice but others said passengers should be more accepting of parents and small children.

“That was a nice gesture,” wrote one Facebook user, according to SFGate. “But I think people need to be more understanding on flights and not make parents and their children feel so unwelcome on flights. We were all babies at one point in life.”

Another person said, “Some people have class—some have a sense of entitlement. Very nice gesture,” according to Travel and Leisure.

This is hilarious- a mom on an overseas flight handed out gift bags (with treats and earplugs) to an ENTIRE flight, to…

“Not necessary, most people understand the stress of traveling with children,” added another commenter.

And some parents wrote that the gesture creates “unrealistic expectations” for parents and kids on a flight, KTRK reported.

How to Fly With Kids

According to the American Academy of Pediatrics’ Healthy Children website, here are a few tips for traveling with children on a plane:

“Allow your family extra time to get through security, especially when traveling with younger children,” it says. “Have children wear shoes and outer layers of clothing that are easy to take off for security screening. Children younger than 12 years are not required to remove their shoes for routine screening.”

It also notes that strollers can be brought through security to make travel easier.

“Arrange to have a car seat at your destination or bring your own along. Airlines will typically allow families to bring a child’s car safety seat as an extra luggage item with no additional luggage expense. Check the airline’s website ahead of time so you know their policy before you arrive at the airport,” according to the website.

Parents and kid should also wash their hands frequently, and parents should bring hand-washing gel and disinfectant wipes.

Regarding the security screening process, “Let them know that bags (backpack, dolls, etc.) must be put in the X‑ray machine and will come out the other end and be returned to them,” the organization writes.

“Discuss the fact that it’s against the law to make threats such as; ‘I have a bomb in my bag.’ Threats made jokingly (even by a child) can delay the entire family and could result in fines,” it adds.