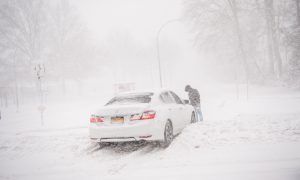 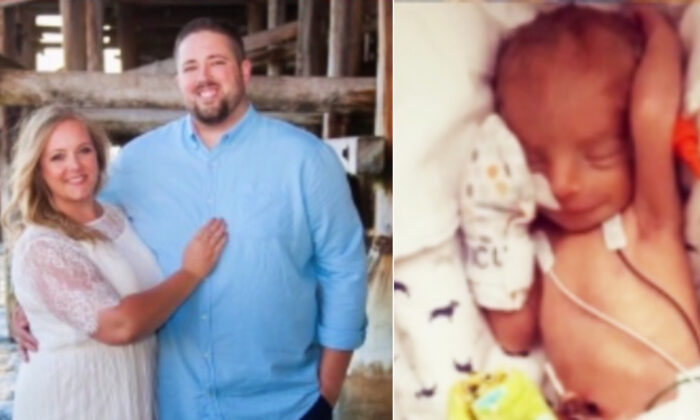 A mother has revealed her heartbreak after giving birth to a miracle baby in the same hospital in which her husband died just days earlier.

Kelsey Ferguson, 31, from Prior Lake in Minnesota, was left a new mum and a widow within just four days when her husband Scott, 30, passed away after suffering from Wegener’s vasculitis, a rare auto-immune disease that attacked his lungs.

Detailing the tragic ordeal on her Caring Bridge page, Kelsey said Scott had been feeling unwell for several weeks and was suffering from symptoms such as body aches, fever, and joint aches.

The couple initially believed he was suffering from psoriatic arthritis, but as Kelsey stayed in hospital preparing to be induced, Scott began coughing up blood and was struggling to catch his breath.

After admitting himself to the ER, he was rushed to the intensive care unit where he later had a lung bypass but sadly went into cardiac arrest.

Doctors did CPR on Scott for over an hour and managed to get a pulse but his condition had deteriorated dramatically and he eventually passed away the following day.

Kelsey was able to spend a few moments with her husband before his death, and was able to hold his hand, hug him, and tell him how much she loved him.

Speaking of the moment on her Caring Bridge page, Kelsey said: “It was by far the hardest thing I have ever had to do. I didn’t want to leave him but after almost fainting a few times and dry heaving, my mom and sister wheeled me back to my own hospital room at Mother Baby Center.”

Four days later, she gave birth to their son, Maxley, at 33 weeks. Doctors decided to induce her over concerns for the baby’s health after a 20-week ultrasound revealed he had a heart defect and chromosomal abnormality.

Maxley weighed just 2 pounds 4 ounces and, although he came out breathing on his own, he has battled extensive health complications and undergone seven operations, including open-heart surgery.

Kelsey had previously suffered a miscarriage in August 2017 after years or trying to get pregnant and eventually turning to a fertility specialist for help.

Speaking to SW News Media last year, Kelsey described Scott as a “6-foot 6-inch, 375-pound man” who was a “teddy bear of a guy with a contagious personality.”

Kelsey said the couple had met through a friend at St. Cloud State University, where Scott played football for the St. Cloud State Huskies from 2006-2010, and she had been attracted to his “magnetic personality that you wanted to be around all the time.”

He had ended his career as one of the most successful players in the school’s history, and the couple moved to Prior Lake and married in March 2016 before trying for a baby.

Speaking of the heartbreaking ordeal of losing her husband, Kelsey credited her son with helping to distract her from the sadness.

“It’s been kind of a nice thing to be able to focus on him and not so much on the sadness,” she said, adding, “It’s definitely been difficult to go through.”

A GoFundMe page has since been set up by Kelsey’s sister, Codi Breeggemann, to help raise money for her and baby Maxley.