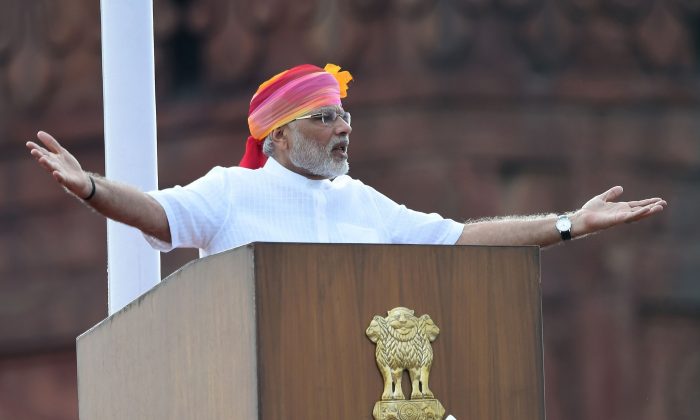 LONDON—Since India won its independence from Britain in August of 1947, the ramparts of the majestic Red Fort in Delhi have served as a backdrop to an annual address by the prime minister. Prime Minister Narendra Modi marked India’s 70th Independence Day anniversary by announcing a major change in foreign policy. Well into an address lasting nearly 90 minutes, he slipped in a few innocuous words that made diplomats sit up. “The people of Balochistan, the people of Gilgit, the people of Pakistan-occupied Kashmir have thanked me in such a manner, from places that I have never been and never had a chance to meet, they have sent wishes to the people of India and thanked us,” he said. “I am grateful to them.”

Modi did not elaborate that the reported thanks from Pakistan citizens followed his remarks three days earlier about Pakistani repression at a party meeting: “Pakistan shall have to answer to the world for the atrocities committed by it against people in Balochistan and PoK [Pakistan-occupied Kashmir].”

With this, New Delhi underscored its willingness to crack down on unrest and protests erupting in Kashmir since the July 8 killing of Burhan Wani, commander of Hizbul Mujahideen, a rebel group that seeks to bind the state of Jammu and Kashmir with Pakistan.

The territorial dispute over Kashmir has raged since 1947 with no resolution in sight as Pakistan has used terrorism in Kashmir as a relatively cost-free strategy to keep India preoccupied on the western frontier.

In the latest wave of unrest, more than 60 people have been killed and more than 8,000 wounded. Normal routines are paralyzed with a curfew imposed by the government and calls for a shutdown by separatist leaders. The Pakistani government declared July 19 a “black day” in memory of Burhan Wani, and Pakistani Prime Minister Nawaz Sharif commented at a rally: “We are waiting for the day (when) Kashmir becomes (a part of) Pakistan.” Sharif also dedicated his own Aug. 14 Independence Day speech to the freedom of Kashmir. Pakistan’s envoy to the United Nations, Maleeha Lodhi, raised the Kashmir issue at the U.N. General Assembly describing Wani as a “Kashmiri leader,” and his death as an “extrajudicial” killing by Indian forces.

For Modi, the Pakistani condemnation is part of a long list of rejections for any efforts at peace since he entered office in 2014 even as Pakistan tightens ties with China against India.

The government overhauled its response in recognition of the failure of old policies that have left India surprisingly vulnerable to Pakistan’s machinations. Hardening its stance on resuming dialogue with Pakistan, New Delhi has now set a five-point agenda for talks: end incitement to violence and terrorism from Pakistan in Jammu and Kashmir, stop cross-border terrorism, prosecute terrorists like Masood Azhar and Hafiz Saeed, deny safe haven to fugitives like Mumbai mastermind Dawood Ibrahim, and close terror training camps.

Critics describe Modi’s Pakistan policy as inconsistent. From inviting Sharif to Modi’s 2014 swearing-in ceremony to canceling talks with Pakistan after its ambassador in India met with Kashmiri separatist leaders, the saga has many twists and turns. The Modi government muted its reaction to the January 2016 terror strike at the Indian Air Force base at Pathankot, in the northern state of Punjab, in the hope that dialogue with the Pakistani civilian establishment was key to management of a turbulent border.

The Sharif government’s inability to reciprocate and the eagerness of the Pakistani military-intelligence apparatus to use Kashmiri unrest to foment trouble has led to a reassessment.

Modi has stressed that the government is willing to talk to any with an “open mind,” but rejects major concessions on Kashmir. Modi claims that Pakistan, with a dismal human rights record, lacks standing on the issue. Case in point: Accounts of those fleeing Pakistan-occupied Kashmir after crackdowns on protests. He describes Pakistan-occupied Kashmir as the fourth part of Jammu and Kashmir, along with Ladakh, Jammu, and the valley, and so rightfully belongs to India.

Modi calls attention to the plight of Balochi people who have resisted Pakistan’s military establishment.

Significantly, the Modi government is calling the world’s attention to the plight of Balochi people who have resisted the Punjabi-dominated military establishment of Pakistan. New Delhi warns that if Pakistan continues to meddle in Kashmir, inciting violence and terror, India will expose the atrocities committed in restive Balochistan. Pakistan annexed the region in 1948 and has since crushed numerous uprisings.

Activists in Balochistan who blame Islamabad for their plight have welcomed Modi’s approach. Though some in India question Modi’s new stance, the main opposition party has supported the government. There may be political consensus in India that Pakistan cannot be allowed to get away with inciting violence in Kashmir.

Modi’s reference to disputed territories in his speech alerts the region, especially China, to revisions in India’s Pakistan policy and the consequences of India’s marginalization. Pakistan-occupied Kashmir is part of a $45 billion China–Pakistan Economic Corridor that leads to the port of Gwadar. Modi has thrown down the gauntlet on China’s infrastructure plans for Pakistan-occupied Kashmir and Gilgit, areas of dispute. The corridor won’t succeed without India’s support on regional security. This comes at a time when there has been a broader deterioration in Sino-Indian ties after China ended India’s bid to join the Nuclear Supplier’s Group in June by propping up Pakistan’s candidacy. Still, the project continues, and Gwadar port, built with massive investment from China, is expected to open next year.

Pakistan countered that Modi’s comments are a veiled threat and that Indian intelligence agencies are “fomenting terrorism in Balochistan.” Impoverished Balochistan is rich in mineral resources and home to Gwadar port, and China has raised concern about security in the region, pushing for a larger role by the Pakistan army. Not surprisingly, soon after Modi’s speech, Pakistan invited self-exiled Baloch leaders for talks.

In India, there is frustration that Pakistan’s Kashmir policies and criticism overlook that India holds regular elections in Jammu and Kashmir with active participation of the local populace. Pakistan’s repeated provocations of using cross-border terrorism have also hamstrung Indian polity. The slogans for “azaadi” in Kashmir are now being used for Islamist mobilization as the ideas of the Islamic State (ISIS) have gained potency.

The Modi government is no longer holding back and wants to expose Pakistan’s own internal vulnerabilities to the world in an attempt to change the strategic calculus of its neighbor. And by doing so, New Delhi is also taking on China, Pakistan’s “all-weather friend.” Two neighboring nations, Bangladesh and Afghanistan, have come out in strong support of India’s position on Balochistan.

Critics pointed out that Modi’s positioning on Balochistan compromises India’s higher moral argument vis-à-vis Kashmir, effectively equating Kashmiris in Indian Kashmir with Balochis. Other stakeholders such as Iran with its large Balochi minority will also react to India’s new position, which requires serious thought on New Delhi’s part. But the real issue might be sustaining a policy beyond rhetoric as India navigates its already tricky ties with China and Pakistan. India is intent on altering the parameters of Pakistan and China’s asymmetric strategies, and how this message is received in Islamabad and Beijing will determine the region’s security and future.

Harsh V. Pant is professor of international relations at King’s College London, head of strategic studies at the Observer Research Foundation, New Delhi, and the author of “India’s Afghan Muddle.” Copyright © 2016 YaleGlobal and the MacMillan Center. This article was originally published on YaleGlobal Online.