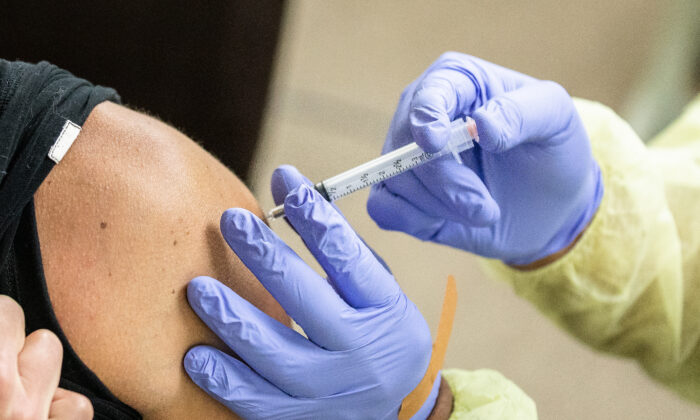 Moderna has joined the world’s major manufacturers of COVID-19 vaccines in the race to investigate the new Omicron variant and adapt their shots to combat the new strain, which has a high number of mutations and appears to spread rapidly.

Speaking on the BBC’s “Andrew Marr Show” on Sunday, Moderna’s chief medical officer Paul Burton said that large quantities of a new and reformulated vaccine to combat the newly identified variant could be available early next year.

Burton noted that scientists and researchers are still “really trying to work out” the new variant and establish whether or not it is more transmissible, how severe its side effects are, and how they can contain and control it with the currently available vaccines; the latter of which researchers should know within a couple of weeks after conducting laboratory experiments.

“We should know about the ability of the current vaccine to provide protection in the next couple of weeks,” Burton said. “If we have to make a brand new vaccine, I think that’s going to be early 2022 before that’s really going to be available in large quantities,” Burton continued.

Burton added that Moderna had mobilized “hundreds of people here in the U.S and around the world” early on Thursday after researchers identified a new variant in South Africa, noting that Moderna is able to “move very fast” to address such issues.

“You bring those together [and] I think this is a very concerning virus,” he said, while urging people to get vaccinated.

Moderna announced on Friday that it is testing a higher dose of its current vaccine against the Omicron variant.

“From the beginning, we have said that as we seek to defeat the pandemic, it is imperative that we are proactive as the virus evolves. The mutations in the Omicron variant are concerning and for several days, we have been moving as fast as possible to execute our strategy to address this variant,” said Stéphane Bancel, chief executive officer of Moderna.

“We have three lines of defense that we are advancing in parallel: we have already evaluated a higher dose booster of mRNA-1273 (100 µg), second, we are already studying two multi-valent booster candidates in the clinic that were designed to anticipate mutations such as those that have emerged in the Omicron variant and data is expected in the coming weeks, and third, we are rapidly advancing an Omicron-specific booster candidate (mRNA-1273.529).”

Meanwhile, Pfizer and BioNTech said they have also initiated investigations on the variant Omicron, also known as B.1.1.529, and could be ready to ship the reformulated shots within 100 days if it is resistant to the current vaccine.

“We understand the concern of experts and have immediately initiated investigations on variant B.1.1.529,” BioNTech said in the statement when asked to comment.

“We expect more data from the laboratory tests in two weeks at the latest,” it added. “These data will provide more information about whether B.1.1.529 could be an escape variant that may require an adjustment of our vaccine if the variant spreads globally.”

Elsewhere, Johnson & Johnson said it has begun testing the effectiveness of its current shot against the Omicron variant.

“We are closely monitoring newly emerging COVID-19 virus strains with variations in the SARS-CoV-2 spike protein and are already testing the effectiveness of our vaccine against the new and rapidly spreading variant first detected in southern Africa,” J&J said in a statement to CNBC.

AstraZeneca has joined the other vaccine makers in investigating the new variant and is “conducting research in locations where the variant has been identified, namely in Botswana and Eswatini,” the company has said.

It has since been detected in Botswana, Hong Kong, Israel, Europe, and the UK. Scientists say it has an unusual combination of mutations and may be able to evade immune responses or make it more transmissible.