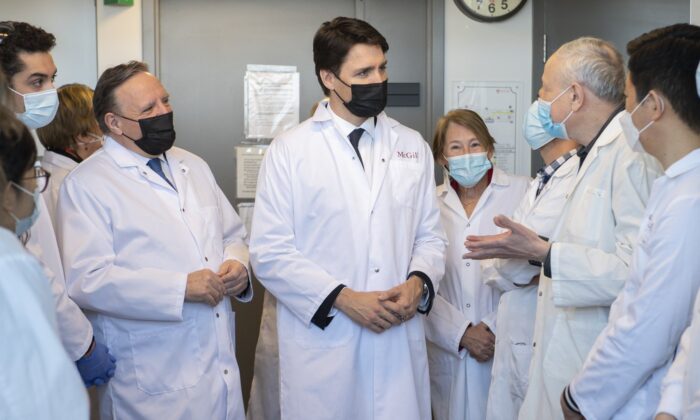 Prime Minister Justin Trudeau, right, and Quebec Premier François Legault, left, tour a research lab at McGill University before an announcement of the opening of a Moderna vaccine production and research facility in Montreal, April 29, 2022. (The Canadian Press/Graham Hughes)
Canada

Trudeau was alongside Moderna CEO Stéphane Bancel and Quebec Premier François Legault at McGill University to announce that the American vaccine maker plans to build its first factory in Canada.

“It’s important to have manufacturing in Canada,” Trudeau told reporters, adding that the facility will create hundreds of jobs in the region.

“It’s good news for everyone across the country.”

Moderna’s new facility will produce mRNA vaccines not only against COVID-19 but also targeting various respiratory viruses, including influenza and respiratory syncytial virus, or RSV.

The Canadian agreement includes both production and vaccine research components, with the facility to be completed by 2024 at the earliest.

Canada’s biomanufacturing industry has declined, but what remains is centred in Quebec and the Greater Toronto Area. Both were in the running for the Moderna plant.

Legault joked that Quebec “won the battle” for the factory against Ontario. “I’m happy to see Quebec winning,” the premier said.

Details of the agreement between Moderna and the Quebec and Canadian governments weren’t released. It’s still unclear how much public money will go toward financing the $180-million facility. A federal government news release on Friday said the parties were still working out the details of the deal.

“A definitive agreement is being finalized based on the 2021 memorandum of understanding between the Government of Canada and Moderna,” it said.

It’s also unclear exactly where the factory will be built. Trudeau said the facility “will be in the greater Montreal area and (the decision) will be taken by Moderna.”

Canada’s biomanufacturing industry declined substantially in the last 40 years and when COVID-19 vaccines were needed, no facility in Canada was immediately able to make them. It meant Canada was entirely reliant on imported vaccines, and in some cases had to pay more to get them faster.

The federal government said it wanted to change that and has invested more than a billion dollars to expand or build new vaccine facilities in Canada.

Bancel on Friday thanked Trudeau for helping Moderna in 2020 when it was struggling.

“We were losing money and didn’t have the financial strength to get this industrial machine growing,” he said of Moderna’s capacity to produce COVID-19 vaccines in the early part of the pandemic. He said Canada was “one of the first to help” the company financially with pre-orders of vaccines, allowing Moderna to scale up production.

More than 29 million doses of the company’s mRNA COVID-19 vaccines have been distributed across Canada since the start of the pandemic.

Unlike other vaccines that use live virus to trigger an immune response, mRNA vaccines carry a molecule that teaches cells how to make proteins. The COVID-19 mRNA vaccines carry instructions for making the protein found on the surface of the virus that causes COVID-19, allowing the body to produce antibodies to fight infection.