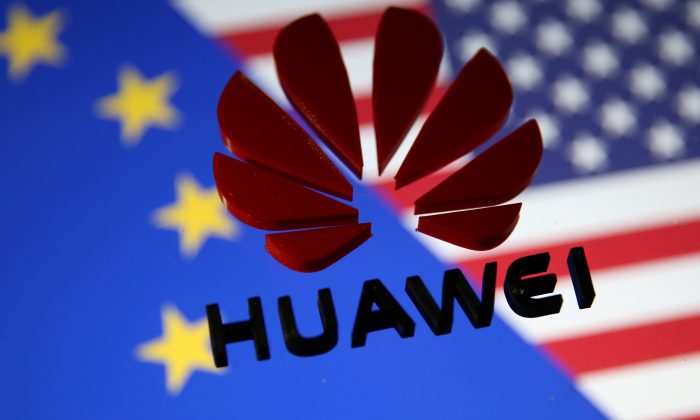 A 3D printed Huawei logo is placed on glass above a display of EU and U.S. flags in this illustration taken on Jan. 29, 2019. (Dado Ruvic/Reuters)
Huawei

PARIS/FRANKFURT—The global trade organization for mobile communications operators, GSMA, has proposed that its members discuss the possibility that Chinese network vendor Huawei will be excluded from key markets.

The European Commission is weighing a de facto ban on Huawei’s 5G network equipment for next-generation mobile networks in the European Union because of security concerns, sources in Brussels have told Reuters.

GSMA Director General Mats Granryd has written to members proposing to put the debate around Huawei onto the agenda of its next board meeting, a spokesman for the federation told Reuters on Feb. 2.

The meeting will be held in late February on the sidelines of the Mobile World Congress, the industry’s biggest annual gathering, in Barcelona.

“It is to be confirmed for now,” he said.

Some Western countries, including the United States and Australia, have restricted Huawei from building next-generation mobile networks, citing concerns that its equipment may contain backdoors opening it up to cyber-espionage.

Western governments are also concerned that China‘s National Intelligence Law requires its companies and people to collaborate in espionage efforts. Approved in June 2017, the regulation stipulates that all Chinese citizens and entities have the responsibility to supply intelligence information if requested by authorities.

Huawei, the global market leader with annual sales of more than $100 billion, denies the existence of any backdoors. The company and its founder, Ren Zhengfei, have repeatedly denied they spy for China.

Many operators rely on Huawei to build out 5G networks, and a de-facto ban would be a considerable setback for Europe’s efforts to stay competitive in communications, with implications for connected factories, self-driving cars, and medical technology.

Deutsche Telekom, Europe’s largest telecoms company, has said that if it had to rip out Huawei equipment from its existing networks, this could delay its plans to roll out new services by two to three years.

Elsewhere across Europe, telecom operators are already shutting out Huawei.

Germany is considering stricter security requirements in an effort to exclude Huawei from building the country’s next-generation 5G networks, while French telecommunications company Orange announced it wouldn’t hire Huawei system for 5G in France. The UK’s BT Group also banned Huawei from 5G and said it would remove the company’s equipment from its existing 3G and 4G operations.

Poland is also set to exclude Huawei from its future 5G network in favor of European players, after a Huawei employee was arrested and charged with espionage.