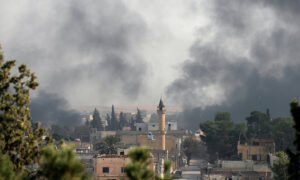 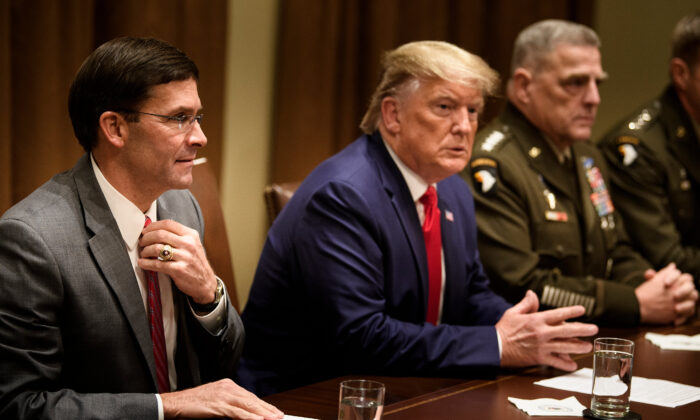 Secretary of Defense Mark Esper (L), President Donald Trump, and Chairman of the Joint Chiefs of Staff Army General Mark A. Milley (R) in the Cabinet Room of the White House in Washington on Oct. 7, 2019. (BRENDAN SMIALOWSKI/AFP via Getty Images)
Politics

Administration officials are defending the president’s decisions on the Turkey–Syria crisis, with Defense Secretary Mark Esper saying Turkey was prepared to attack Kurdish forces regardless of any U.S. action, and Treasury Secretary Steven Mnuchin explaining why there was a delay in imposing sanctions on Ankara.

Esper, in an interview with Fox News’s Chris Wallace on Oct. 13, responded to questioning from Wallace, who claimed Turkey may not have gone on the offensive if President Donald Trump hadn’t removed a contingent of roughly 50 U.S. troops from Syria last week.

“The first thing that we understood—I’ve understood from my counterparts, Secretary Pompeo from his, and certainly from President Erdogan—is [Turkey was] fully committed to doing this regardless of what we did,” Esper said.

“We are talking about less than 50, more like two dozen [U.S. special forces]; there is no way they could stop 15,000 Turks from proceeding south.”

Esper said the United States is “not going to go to war against Turkey; that’s not what we signed up for.”

When asked if the roughly 50 U.S. troops could have been used as a “tripwire” of sorts that would have stopped Turkish President Recep Tayyip Erdogan from the assault, Esper strongly rejected the idea.

“I’m not one to classify them as a ‘tripwire’ and sacrifice them, if you will,” he said.

The United States said on Oct. 13 that it’s poised to withdraw some additional 1,000 troops from northern Syria after learning that Turkey planned to extend a military incursion further south and west than originally planned.

One consideration in the decision was that Washington’s Kurdish-led ally, the Syrian Democratic Forces (SDF), was looking to make a deal with Russia to counter the Turkish offensive.

Turkey’s offensive aims to neutralize the Kurdish YPG militia, the main component of the SDF, which is seen by Ankara as a terrorist group aligned with Kurdish insurgents in Turkey. But the SDF has also been Washington’s key regional ally in dismantling ISIS and its claimed “caliphate” in Syria.

Treasury Secretary Mnuchin, in an Oct. 13 interview on ABC’s “This Week,” defended delays in imposing U.S. sanctions on Turkey in response to its military activities. On the fifth day of Turkey’s offensive against Kurdish militias, pursued despite international condemnation, Turkish-led forces appeared to have seized control of the Syrian border town of Tel Abyad, a Reuters witness said.

“Let me just say this is a complicated, developing situation. You have a NATO ally on one hand fighting against the Kurds, who were helping us with the fight against ISIS,” Mnuchin said.

“We are in daily communications with Turkey, both at the Defense Department [and] the State Department, on very specific issues. We are ready to go at a moment’s notice to put on sanctions.”

In an Oct. 11 announcement, Mnuchin said Trump is intending to soon sign an executive order to “dissuade Turkey” from any further military action. The order is set to designate individuals and entities of the Turkish government “involved in human rights abuses or actions” that would lead to instability in northeastern Syria.

“At the direction of President Trump, we will be targeting specific Turkish individuals or departments as needed,” he said in a statement. “This is a notice to banks and other parties to be on notice of potential actions.”

On the upcoming order, Trump said on Twitter that the “Treasury is ready to go, additional legislation may be sought. There is great consensus on this. Turkey has asked that it not be done. Stay tuned!”

The sanctions, Mnuchin said, could start small but could also be “maximum pressure” and could potentially destroy the Turkish economy.

“We have warned the Turks. I spoke to the finance minister on Friday. The State Department has also had conversations,” Mnuchin said.