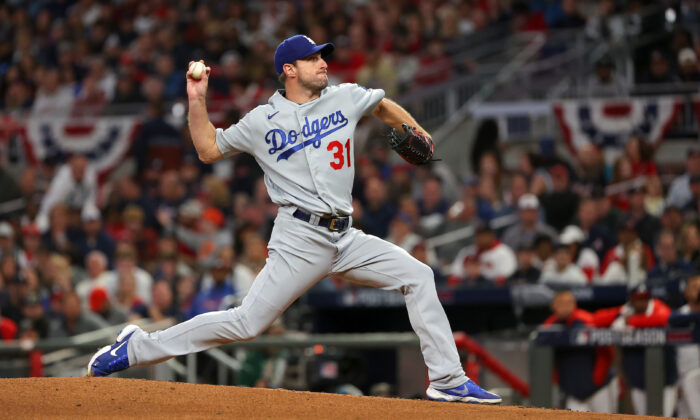 Max Scherzer #31 of the Los Angeles Dodgers pitches against the Atlanta Braves in the first inning of Game Two of the National League Championship Series at Truist Park in Atlanta, on Oct. 17, 2021. (Kevin C. Cox/Getty Images)
Baseball

MLB Commissioner Rob Manfred announced following the 5 p.m. deadline that the owners of Major League Baseball (MLB) and the players union were unable to come to an agreement on a new collective bargaining agreement (CBA) and ceased negotiations.

“The concerns of our fans are at the very to of our consideration list,” said Manfred.

As of now, spring training is suspended, alongside a minimum of the first two regular season series.

After two and one-half months of stalemate, MLB Owners and the Players Union made some concessions in negotiating a new collective bargaining agreement (CBA). It was the ninth straight day of discussion and 16 hours of discussion Monday through the night giving way to the owners extended the deadline to Tuesday 5 p.m. ET.

The prior first six meetings concentrated primarily on economics during the lockout, as both sides proposed their demands long ago.

Only agreeing to provide higher minimum salaries to young players, the two sides were still far apart in all other regards. MLB has the lowest earnings for rookies compared to most other top professional leagues.

Progress was made as the owners conceded in some of their proposals. In 2016, the owners controlled much of the financial agreement.

“We’re working at it,” said MLB Commissioner Rob Manfred, around 6 p.m. on Monday after the second session of the day with the union.

Mets pitcher Max Scherzer and free-agent pitcher Andrew Miler were the only players present at the meetings alongside the union.

Negotiations resumed Tuesday morning as the players have been holding strong to their demands this time. However, two major issues must be resolved by Tuesday’s deadline.

First of all is the number of teams in the postseason playoff field. The players are holding firm to 12 teams, while the owners have demanded 14 to create more games and revenue.

While the players demanded a salary cap of $245 million for this year, increasing to $273 million by the final season.

The players’ desire for a higher salary tax cap which would allow teams to spend more on salaries; the owners apparently made some concession on this issue Monday.

At risk is the delay of “Opening Day” scheduled for March 31 as pre-season training is on hold. The owners use the tactic to pressure the players to more readily concede in negotiations, as players’ salaries are at risk.

Yankees pitcher Jameson Taillon posted a tweet after attending the meetings last week: “Players are used to their ‘threats.’ Owners actions have made it clear all along that they have a set # of games where they still make profits/get TV money. They don’t want to play. It’s sad that these are the guys who drive the direction and ‘future’ of our amazing sport.”

MLB’s ninth work stoppage has postponed the typical 30 days of spring training games, which were scheduled to begin Saturday. Currently, exhibition games are canceled through March 7.

The extent of progress in today’s negotiations shall be known by day’s end. If compromises are not made, the owners will likely extend another self-imposed deadline.