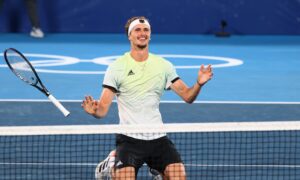 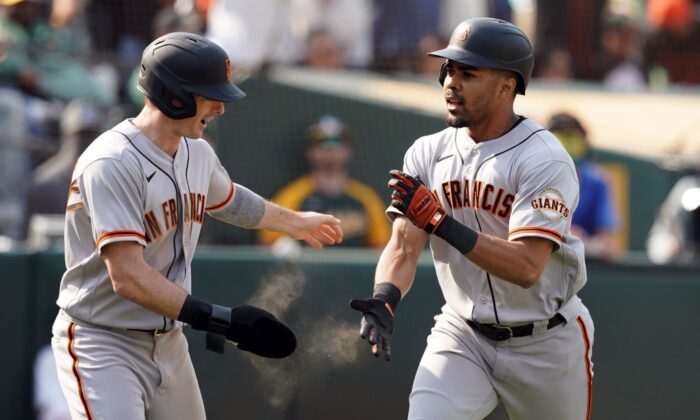 Wade’s homer, his 16th of the season overall and first in 18 pinch-hitting appearances this year, came after Trivino (5–5) had walked Brandon Belt to put the potential tying run aboard in a 5–4 game with one out in the ninth.

Wade’s homer was the fourth of the day for the Giants, with Kris Bryant, Belt, and Darin Ruf having connected earlier, the first three coming with San Francisco behind by at least two runs.

An RBI double by Starling Marte and two-run single by Seth Brown highlighted a three-run first for the A’s, who took the upper hand against Giants starter Kevin Gausman and retained it until the ninth.

Gerrit Cole (12–6) made his second start since returning from missing over two weeks with COVID-19 and allowed five hits in his sixth scoreless start of the season. The Yankees are 21–5 since dropping three of four in Fenway Park to the Boston Red Sox July 22–25.

The Orioles lost their 17th straight game despite two home runs by Anthony Santander and one each by Ryan Mountcastle and Ramon Urias.

Atlanta left-hander Drew Smyly (9–3) allowed three runs and five hits with eight strikeouts in five innings. He did not walk a batter. His last defeat was May 26, a span of 14 starts without a loss. The Braves are 12–2 in those starts.

Left-hander Kris Bubic took a no-hitter into the seventh inning to lead Kansas City to a win over host Chicago.

Bubic (4–6) gave up two runs on one hit in 6 1/3 innings for Kansas City, which notched its fifth victory in the past six games. Nicky Lopez went 3-for-5 with a double, an RBI and two stolen bases to lead the Royals on offense.

Patrick Wisdom hit a two-run homer for the Cubs. The blast marked the only hit of the game for Chicago, which has dropped 14 of its past 16.

Nola, perfect through six innings, allowed only an RBI single to Manny Machado in the seventh and struck out 11 when he walked Fernando Tatis Jr. with one out in the ninth and Philadelphia ahead 3–1. After getting Machado to fly out for the second out, Cronenworth belted Nola’s 117th pitch of the night into the right-center field seats.

Philadelphia had two men on in the 10th but failed to score. After snapping a four-game skid with Friday’s series-opening victory, the Phillies lost for the eighth time in the last 11 games.

Triston McKenzie yielded one run and two hits while pitching into the eighth, and Jose Ramirez clubbed a three-run homer as Cleveland beat visiting Los Angeles.

After taking a perfect game into the eighth inning at Detroit last weekend, McKenzie (3–5) was nearly as good Saturday. He retired 10 straight batters at one point and struck out eight before being lifted with nobody out in the eighth after issuing his only walk of the day. McKenzie also fanned Angels star Shohei Ohtani three times in the contest.

The Angels, who totaled four hits during Friday’s 9–1 series-opening defeat, managed just three Saturday and scored their lone run on Jo Adell’s fielder’s choice in the eighth. Los Angeles, 3–3 on a 10-game road stretch, has dropped four in a row to Cleveland this season.

Trea Turner and Albert Pujols hit first-inning home runs and Los Angeles extended its winning streak to nine games by hanging on for a victory over New York.

Brandon Nimmo hit a home run for the Mets, who have lost eight of their last nine games. Former Dodgers left-hander Rich Hill (6–5) gave up three runs over five innings on six hits in his sixth appearance (five starts) with the Mets.

Entering the game with a 6.00 ERA in three August starts, Patino (3–3) surrendered five hits and struck out five before exiting after 91 pitches.

Wander Franco went 2-for-4 with a double, two runs and an RBI. The rookie stretched his majors-best on-base streak to 23 games—one off Rocco Baldelli’s team rookie record from 2003.

Christian Yelich homered twice, including a grand slam in the eighth inning, and drove in six runs as Milwaukee evened a three-game series against visiting Washington.

Milwaukee broke a 4–4 tie with five runs in the eighth inning. Javy Guerra (0–1) loaded the bases with nobody out before later hitting Kolten Wong with a pitch, allowing Luis Urias to score the go-ahead run. Yelich followed with a nine-pitch at-bat and launched a 454-blast to right-center field, his third hit of the game.

Devin Williams (7–1) pitched a scoreless eighth inning for Milwaukee, which has won nine of its last 12 games. Yadiel Hernandez homered for the Nationals, whose three-game winning streak came to an end.

Nick Castellanos also had a two-run homer and drove in four runs for the Reds, who won their third straight against the Marlins, thanks to stellar defense. The Reds, who improved to a season-best 11 games over .500 (68–57), turned five double plays and Shogo Akiyama made a key sliding catch to end a Marlins rally.

Luis Cessa (4–2) worked out of a bases-loaded jam, thanks to Akiyama’s catch of a sinking Lewis Brinson liner in the fifth inning. Michael Lorenzen limited damage in another Marlins rally in the eighth en route to his second save.

Marcus Semien added his 30th home run of the season as the Blue Jays ended a three-game losing streak. The teams have split the first two games of the three-game series. Ryu (12–6) allowed five hits with one walk and five strikeouts.

Detroit right-hander Wily Peralta (3–3) allowed two runs and six hits in six innings. He struck out two with one walk allowed. Victor Reyes and Derek Hill each had two singles for the Tigers, who have lost five of their past six games.

Lyles (6–10) permitted five hits and three walks in a bounce-back outing after losing three straight and five of his last six starts. Andy Ibanez finished with three RBIs for Texas. Nick Solak, Isiah Kiner-Falefa and Yohel Pozo all drove in one run apiece for the Rangers, who had lost four straight and seven of their last nine games.

Enrique Hernandez had an RBI single for Boston. Red Sox starter Eduardo Rodriguez (9–7) was hit around to the tune of five runs on eight hits with a walk and three strikeouts in just 3 2/3 innings.

Mariners rookie right-hander Logan Gilbert (5–5) allowed nine runs on eight hits and one walk over 4 2/3 innings. Seattle starters had allowed more than three runs just once this month prior to the series opener when Yusei Kikuchi surrendered seven runs over 2 2/3 innings.

Kevin Newman also homered for the last-place Pirates, who had entered the series having lost 13 of 14 and were 20 1/2 games behind third-place St. Louis.

The Cardinals’ J.A. Happ left with a 3–2 lead, charged with two runs on six hits in six innings. He walked one and struck out eight.

Elias Diaz hit a three-run homer in the bottom of the ninth and Colorado rallied to beat Arizona in Denver.

Garrett Hampson also went deep and Charlie Blackmon had three hits for the Rockies, who have won nine straight home games and five in a row overall. Daniel Bard (7–5) pitched the ninth to pick up the win.

Daulton Varsho homered among his two hits and Ketel Marte had three hits for Arizona. Diamondbacks starter Zac Gallen had his best outing of the season but got a no-decision. He went seven scoreless innings and struck out nine.