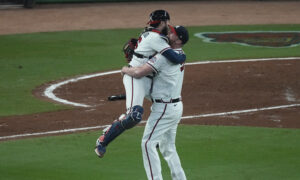 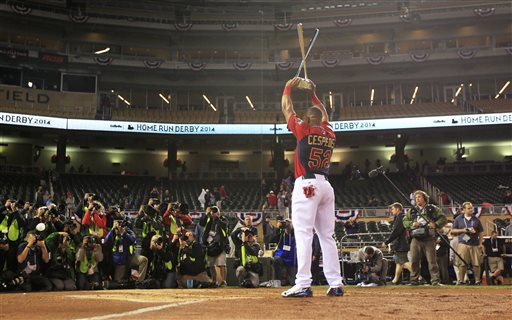 The 2015 MLB All Star game, the 86th, will be hosted by the Cincinnati Reds and played at the Great American Ball Park in Cincinnati, Ohio.

The game will be broadcast on Fox.

The host city and date were announced on January 21, 2013 by MLB Commissioner Bud Selig.

It’s the first time Cincinnati has hosted the game since the 1988 game, which was played at Riverfront Stadium.

The venue for the 2016 game has not been decided yet, but Selig told reporters on July 16 that the 2016 and 2017 All-Star Games should be awarded before he retires.

The Orioles have applied to host the 2016 All-Star Game and, in May, Selig called Baltimore a “very, very viable option” to host the annual event in two years, reported the Baltimore Sun.

Selig has said that the game should rotate between leagues each year, meaning that after the 2015 game the 2016 game would go to an American League city.

Voting will be the same as always, pending future possible changes.

MINNEAPOLIS—Aroldis Chapman wanted to interview Yasiel Puig, the Los Angeles Dodgers starwho shaved a star on the left side of his head for the for the All-Star game.

At the National League’s media session Monday, the Cincinnati Reds closer managed to squeeze in among the reporters and cameras, and he extended a tape recorder.

“So, how does it feel to be at an All-Star game?” Chapman asked.

Puig responded: “I’m here talking to someone who looks ugly.”

Five Cubans are on the rosters for Tuesday night’s game at Target Field: Chapman earned his third selection, and Puig is a first-time All-Star along with Oakland outfielder Yoenis Cespedes and Chicago White Sox first baseman Jose Abreu and shortstop Alexei Ramirez.

Ramirez and Chapman were teammates on the gold medal-winning team at the 2007 Pan American Games in Rio de Janeiro.

“It kind of feel like old times playing with the national team in Cuba,” Ramirez said. “We got this vibe, in which we try to be happy all time, having fun, playing dominoes.”

“We left a country looking to make a dream come true, which is to play in the best baseball league in the world,” added Ramírez. “We have accomplished that and here we are, at the All-Star game.”

Cespedes won the All-Star Home Run Derby for the second year in a row Monday night, powering his way past Cincinnati’s Todd Frazier 9-1 in the final round to become the first repeat winner since Ken Griffey Jr. in 1998 and ’99.

Puig, wearing a bright yellow sleeve on his right arm, was eliminated in the first round and became the first homerless participant since Robinson Cano two years ago in Kansas City.

Cespedes won the derby last year, even though he wasn’t an All-Star. He’s batting .246 this season with 14 homers and 56 RBIs.

“The Cuban league is below the major leagues levels, but the Cuban players have shown that we are capable to shine here,” he said. “Last year, I was only invited to the derby. That was a nice experience, but it wasn’t the same thing. I wanted to feel like an All-Star. This year I was able to do it.”

There were a record 19 Cubans on opening-day rosters and disabled lists, four more than the previous mark set last year and third among foreign-born players behind only the Dominican Republic (82) and Venezuela (59).

Abreu, who made his big league debut this season, is hitting .292 with 73 RBIs and a league-leading 29 homers.

“After all we have gone through, this is big in our lives, and we felt so proud of doing well,” he said. “We have the abilities to perform.”

Puig, a sensation since he was called up to the Dodgers in June last year, is hitting .309 with 12 homers and 52 RBIs. He was elected to a starting outfield spot by fans.

“This the sort of stuff all Cuban players dream since they were kids, being here at an All-Star game, playing at a World Series,” he said. “We are five this year, and I hope we can add some more next year.”

Abreu and Puig text each other regularly during the season to discuss how to improve their play. Cespedes, who played against Puig in Cuba, was impressed with his compatriot’s increased maturity and diminished flashiness.

“He was very young when he arrived here with so much desire to play and prove himself. That’s the reason he got into some things,” Cespedes said. “On his second year, he knows the league and he’s more calm.”

“If we managed to get a normalization of the ties between the two countries and they can get here in the United States,” he said, “there will be more and more Cubans in the majors.”