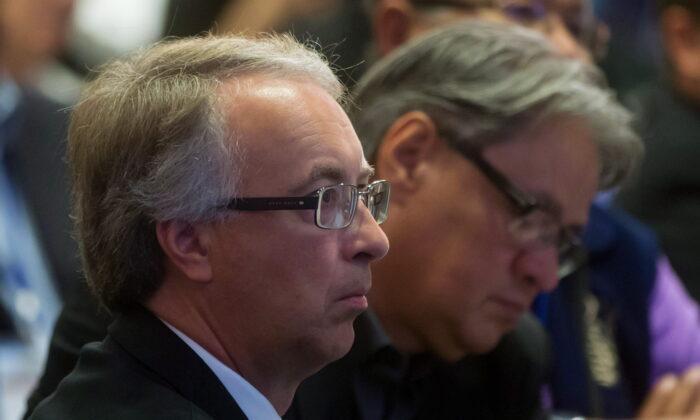 B.C. Minister of Aboriginal Relations and Reconciliation John Rustad (L) looks on during a gathering of First Nations leaders and B.C. cabinet ministers in Vancouver on Sept. 10, 2015. (The Canadian Press/Darryl Dyck)
Canada

B.C. Liberal MLA John Rustad, who was recently ousted from his party for reposting a tweet that questioned carbon dioxide’s role in climate change, says he did so because the government’s climate policies that revolve around CO2 emissions ignore contrary data and are “intentionally hurting people” by making life unaffordable.

A former cabinet minister and currently representing the Nechako Lakes riding as an independent MLA, Rustad says recent policies that mandate the reduced use of fossil fuels or the axing of fertilizer emissions are being pushed by “environmental elitists” who aren’t acknowledging the human suffering these policies bring about.

“And if these policies are intentionally designed to make it tougher for people to survive, that’s just not right. A government shouldn’t be doing that.”

Rustad was first elected to office in 2005. He served as minister of aboriginal relations and reconciliation, and, later as minister of forests, lands and natural resource operations under Christy Clark’s Liberals.

The MLA was removed from his caucus on Aug. 18 after he shared a Twitter post by Greenpeace co-founder Patrick Moore challenging the idea that carbon dioxide is the “control knob of global temperature” regarding climate change.

Moore’s tweet included an article by Australian writer Tony Thomas, who cited data from temperature satellites monitored by the University of Alabama in Huntsville saying that there has been “no linear warming trend for 10 years to 1 August 2022” in Australia.

Thomas, whose article was published on Aug. 14 on Quadrant Online, an Australian literary, cultural, and political journal, also said organizations like the Australia Institute of Marine Science “are struggling to cope with the Great Barrier Reef enjoying the largest area of coral cover ever recorded.”

“So when I see information being posted that is from the Australian government, about their temperatures and about things like coral reefs, I say ‘OK, let’s post these things. Let’s create a discussion around these types of issues,’” Rustad said in the interview.

With his removal from the caucus, Rustad says he holds no animosity toward his former party’s leadership but that the B.C. Liberal Party “at this point had become taken over by woke elitism.”

Rustad said the reason the BC Liberals’ current leadership has “fear” of allowing free speech, particularly on climate change issues, is that it is afraid the party will be targeted by environmental elitists and risk losing votes.

“These NGOs that are pushing this environmental agenda, … I would suggest that [they have] penetrated into political parties like the NDP and even the BC Liberals, and it’s sad to see.”

The Epoch Times reached out to the BC Liberal Party for comment but did not hear back by publication time.

Rustad warns that democracy is in danger.

“Anybody that brings forward any science or opinion that is contrary to the doctrine of the day, is immediately shut down or fired, or tried to be shamed into silence,” he said.

Rustad says that, as an independent MLA, he will support any candidate sharing similar views with him that policies by the environmental elitists hurt B.C. residents and distort their quality of life.

“I just think it’s time to say enough is enough and to stand up and say ‘no.’”

Rustad, who had worked in the forest industry for over 20 years, quickly drew criticism from BC Liberal Party Leader Kevin Falcon for his Twitter post, stressing that Rustad does not speak on behalf of the caucus on the climate change issue.

“Let me be clear, #ClimateChange is one of the most critical threats facing our future,” Falcon said on Twitter on Aug. 17. “The @bcliberals are strongly committed to substantive climate action & restoring BC’s place as a world leader in climate policy.”

Falcon followed up with a statement the next day booting Rustad out of the caucus.

Rustad says he believes climate change must be addressed but does not believe it poses an existential threat or constitutes an “emergency.”

He added that while he supports transitioning from fossil fuels and creating alternative energies, he does not support driving up the cost of fossil fuels to the point that food and energy costs go up. He cited the example of farmers impacted by fertilizer and fuel costs.

“If the costs for farmers go up, guess what happens? The cost of food goes up or they have to cut back on fertilizer use, which means you end up with much higher costs because there’s less food available,” he said.

“We’re facing a global food crisis and shortage, and it’s just wrong on so many levels that we would be reducing our agricultural output.”

He stressed the need to be energy self-sufficient lest the province becomes vulnerable to external threats.

Although energy self-sufficiency may also mean having alternatives such as wind, solar, and run-of-river power development in B.C., Rustad said “we need to be realistic about it.”

“People need to understand the costs of doing that—because it does cost more,” he said.

“If people think that they would like to have those negative impacts, that’s fine, and governments can implement them. But government[s] should not implement them without having that open and honest discussion about what it means and how people are impacted.”