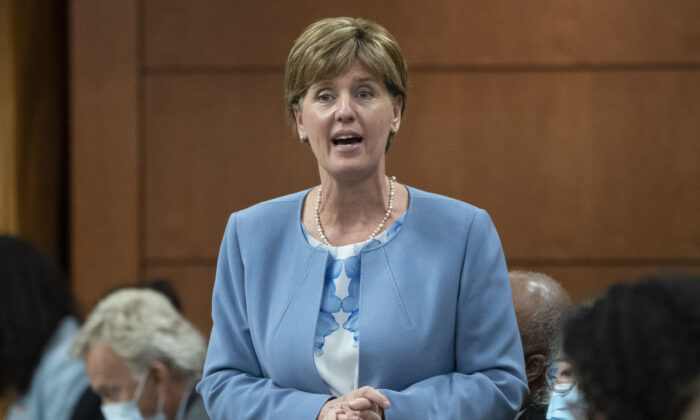 Agriculture and Agri-Food Minister Marie-Claude Bibeau rises during question period in the House of Commons in Ottawa on June 2, 2022. (The Canadian Press/Adrian Wyld)
Canada

Agriculture ministers from several provinces say they’re concerned about the federal government’s plan to reduce fertilizer emissions in the name of climate change at a time when global food security is an issue.

A three-day meeting of federal, provincial, and territorial ministers concluded in Saskatoon on July 22 with Saskatchewan, Alberta, and Ontario expressing disappointment over the Liberals’ intent to impose fertilizer emissions reduction targets on Canadian farmers.

“The Trudeau government has apparently moved on from their attack on the oil and gas industry and set their sights on Saskatchewan farmers.”

The statement was issued shortly before Marit and Horner appeared at a press conference along with federal Minister of Agriculture and Agri-Food Marie Claude Bibeau and other ministers.

Bibeau said the targets are about reducing the emissions caused by fertilizers, not the use of fertilizers themselves.

“The idea is to invest in research and innovation, and we’re sure that we will find new types of fertilizer through better practices, through new technologies—ways to be even more sustainable,” she said.

In December 2020, the government announced its goal to reduce absolute levels of greenhouse gas emissions arising from fertilizer use by 30 percent below 2020 levels by 2030. Specifically, it aims to reduce nitrous oxide emissions associated with synthetic nitrogen fertilizer use.

Ontario Agriculture Minister Lisa Thompson said she is “disappointed in the federal government’s approach to imposing fertilizer emission reduction targets when the world is struggling with food security,” and at a time when Canada’s farmers “are dealing with significant and complex issues.”

“As our farmers work to feed Canada and the world, we need to work with them and support their ongoing efforts to grow and produce the food we need,” she said in a statement posted on Twitter after the press conference.

“The federal government needs to be true partners, rather than simply imposing targets that make it harder.”

Farmers ‘Asked to do More With Less’

The plan doesn’t sit well with Horner, who criticized the Liberals for pushing their fertilizer targets at a time when the world is facing food supply issues.

“This has been the most expensive crop anyone has put in, following a very difficult year on the prairies,” he said in the statement.

“The world is looking for Canada to increase production and be a solution to global food shortages. The Federal government needs to display that they understand this. They owe it to our producers.”

The statement noted that farmers in Western Canada “already produce the most sustainable agri-food products in the world, and they’re continually being asked to do more with less. We cannot feed the growing world population with a reduction in fertilizer.”

Bibeau claimed that farmers are embracing the Liberals’ plans.

“I was in Alberta, and Manitoba and Saskatchewan in the last 10 days or so, and I’m meeting with many farmers in the field. I know how much they care for the environment and how much they invest in new practices and new technologies to reduce their emissions as much as possible,” she said.

According to the joint statement, fertilizer emissions reduction was not even a topic on the agenda of the agriculture ministers’ meeting in Saskatoon.

“Provinces pushed the federal government to discuss this important topic, but were disappointed to learn that the target is already set,” the statement said.

“The commitment to future consultations are only to determine how to meet the target that Prime Minister Trudeau and Minister Bibeau have already unilaterally imposed on this industry, not to consult on what is achievable or attainable.”

After the meeting, Agriculture and Agri-Food Canada issued a press release promising to inject $500 million in new funding to support Canadian farmers and food security, and improve business risk management programs, including raising the AgriStability compensation rate from 70 percent to 80 percent.

Fertilizer sector and farm producer groups have argued that, with the technologies currently available, a reduction of nitrous oxide emissions can’t be done without reducing fertilizer use.

“This short-sighted approach to reducing emissions will result in the need to reduce nitrogen fertilizer use and will have considerable impact on Canadian farmers’ incomes and reduce overall Canadian exports and GDP,” Fertilizer Canada, which represents the manufacturers and distributors of a range of fertilizers, said in a report last May.

In Western Canada, that means canola revenues would be reduced by up to $441 million while wheat revenues could see a reduction of $400 million, it estimated.

The Western Canadian Wheat Growers Association seconded the position taken by Fertilizer Canada. In a press release on July 18, Wheat Growers urged the agriculture ministers to focus their discussions on “real priorities” when they met in Saskatoon.

“Over the past several years, farmers have been seriously harmed by the carbon tax, transportation stoppages, non-science-based decision making and now with the proposed 30 percent reduction in fertilizer emissions,” the release said.

“Much of these policies have been based on the European ‘Farm to Fork’ which is resulting in protests in the Netherlands, Italy, Germany and beyond. To continue down this path will result in national and global food shortages.”