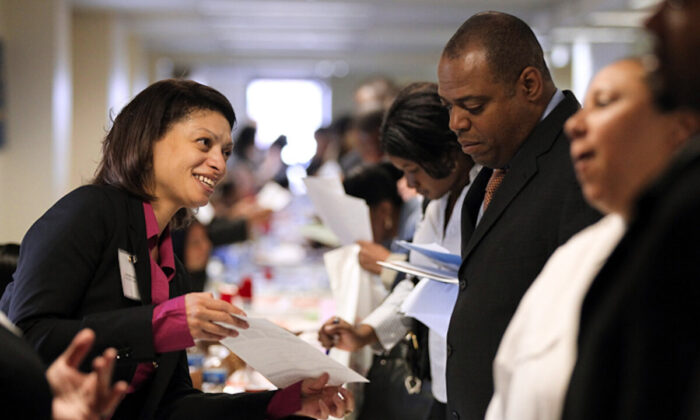 A job seeker meets with a recruiter during a job fair in Brooklyn, New York City, on April 12, 2021 (Justin Sullivan/Getty Images)
Economies

Unemployment Rises Among Blacks, Teenagers, and Those With Associate Degree

Friday’s non-farm payrolls report—a barometer of America’s labor market health—not only reflected below-expectations job growth in August but also showed unemployment rising for black workers, teenagers, and those with some college or an associate degree.

The Labor Department’s jobs report, released Sept. 3, showed that non-farm payroll employment rose by 235,000 in August, down from an upwardly revised 1.05 million jobs added in July and far below the FactSet-provided consensus forecasts of 750,000.

“With a big shortfall in jobs creation or recovery in August, it appears the Delta variant has infected the U.S. economy. Payrolls growth came in well below expectations and at the lowest level since January,” Bankrate senior economic analyst Mark Hamrick said in an emailed statement to The Epoch Times.

The overall unemployment rate fell to 5.2 percent in August from 5.4 percent in July, while the total number of unemployed people edged down to 8.4 million.

“This latest employment snapshot interrupts the process of substantial further progress as called for by the Federal Reserve as it considers dialing back on boosting the economy. The unemployment rate at 5.2 percent still has some way to before matching the 3.5 percent low notched before the pandemic. Even so, it is the lowest level since the pandemic began,” Hamrick added.

Yet the decline in unemployment was not universal across all groups surveyed for the report. From July to August, the unemployment rate rose for blacks (from 8.2 percent to 8.8 percent), teenagers aged 16–19 (from 9.6 percent to 11.2 percent), and those with some college or an associate degree (from 5.0 percent to 5.1 percent), according to the report’s more granular breakdown.

While it’s normal for unemployment rates among all groups to see upward reversals amid a broader downtrend, some economists expressed concern about the latest figures.

“The rise in Black unemployment in August is certainly troubling, considering their unemployment rates were already much higher than any other group,” Elise Gould, senior economist at the Economic Policy Institute, wrote on Twitter.

The slowdown in jobs growth was most notable in the leisure and hospitality sector, which recorded 2.1 million job gains between February and July but came in flat in August.

Commenting on the report, President Joe Biden said at a Sept. 3 briefing at the White House that the overall picture the report paints is one of “an economic recovery that is durable and strong.”

“While I know some wanted to see a larger number today, and so did I, what we’ve seen this year is a continued growth, month after month, in job creation,” Biden added. “We are adding jobs, not losing them.”

Biden blamed the Delta surge for why the jobs report wasn’t stronger.

“President Biden’s ‘worker-less recovery’ is hammering both Main Street and families as businesses fight to fill jobs and families struggle with rising prices. No wonder the recovery is stalling, and consumer optimism has dropped alarmingly,” he stated, noting also “no progress” on lifting the labor force participation rate, which in August held steady at 61.7 percent.

The uptick in black unemployment challenges the Federal Reserve’s goal that its “maximum employment” objective also be “broad and inclusive.” The figure creates tough optics for the Fed as it considers pulling back on stimulus at its upcoming policy meeting at the end of September.