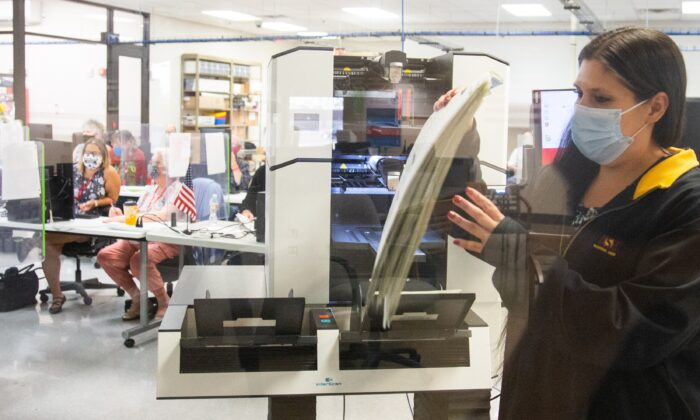 Votes are counted by staff at the Maricopa County Elections Department office in Phoenix, Ariz., on Nov. 5, 2020. (Courtney Pedroza/Getty Images)
US News

Arizona lawmakers and officials in the state’s largest county clashed anew last week over election audit subpoenas, with county officials refusing to hand over routers and claiming they don’t have passwords to access administrative control functions of election machines.

Arizona’s Senate told Maricopa County on May 7 that it would issue subpoenas for live testimony from the county’s Board of Supervisors unless it receives materials that are being withheld.

“We’ve been asked to relay that the Senate views the County’s explanations on the router and passwords issues as inadequate and potentially incorrect,” a lawyer for the Senate said in an email to county officials.

The Arizona Senate subpoenaed election materials, such as ballots, following the 2020 election; lawmakers also issued subpoenas for election machines, passwords, and other technology.

Maricopa County alleged in a lawsuit that the request for materials was overly broad and threatened voter privacy. A judge, though, ruled that the request was “the equivalent of a Court order.” But the county says it won’t turn over routers or router images, claiming that doing so poses a significant security risk to law enforcement.

The county has also informed the Senate’s audit liaison, former Republican Secretary of State Ken Bennett, that it doesn’t have passwords to access administrative functions on Dominion Voting Systems machines that were used to scan ballots during the election.

“They’ve told us that they don’t have that second password, or that they’ve given us all the passwords they have,” Bennett told One America News at the site of the audit in Phoenix.

“They’ve also told us that they now can’t, as they promised a couple of weeks ago, provide our subcontractors with the virtual access to the routers and hubs and other things at the Maricopa County tabulation and election center, as was part of the subpoenas.”

John Brakey, a Democrat who is serving as an assistant to Bennett, told the broadcaster that he was “blown away” by the password development.

“It’s like leasing a car and they refuse to give you the keys. They’re supposed to be running the election. You know what’s wrong? Sometimes these vendors have too much power, and we’re voting on secret software, and that’s why this recount down here is very important,” he said.

Jack Sellers, the Republican chairman of the Maricopa County board, said on May 7 that he’s angered by allegations of corruption, and commented on the password issue.

“The specific password and security tokens Ken Bennett referenced … provide access to proprietary firmware and source code. Elections administrators do not need to access this information to hold an election, and we do not have it in our custody,” he said in a statement.

The county board called an emergency meeting later on May 7, to consider legal advice and litigation regarding its noncompliance with the Senate subpoenas.

In a response to the Senate’s lawyer, Allister Adel, Maricopa County’s attorney, said that the county has “already produced every password and security key for the tabulators that is within the County’s possession.”

“It does not have any others,” Adel said. The county is working to figure out if there is “a safe manner” to get the Senate information from the routers without risking non-election data.

Dominion, whose machines are used in about half of U.S. states, didn’t respond to a request for comment. The company has said it supports forensic audits by federally accredited laboratories and that Cyber Ninjas, which is leading the Arizona audit, isn’t verified.

Both Dominion and Sellers noted that Maricopa County contracted its own audits, one for machines and another for ballots.

But Brakey, the assistant Senate liaison, has called the description of those audits misleading. The ballot batches were picked beforehand and auditors only analyzed a small percentage of the ballots cast in the election, he said, while the machine testing could only determine whether the technology was working well at the time of the review.

“They claim that’s an audit. I call it fatally flawed,” he told One America News.

“Its most recent demands jeopardize the entire mission of the Maricopa County Sheriff’s Office,” he said in a statement.

“We are talking about confidential, sensitive, and highly classified law enforcement data and equipment that will be permanently compromised. The current course is mind-numbingly reckless and irresponsible. I look forward to briefing them on the horrendous consequences of this demand and the breadth of its negative impact on the public safety in this County.”