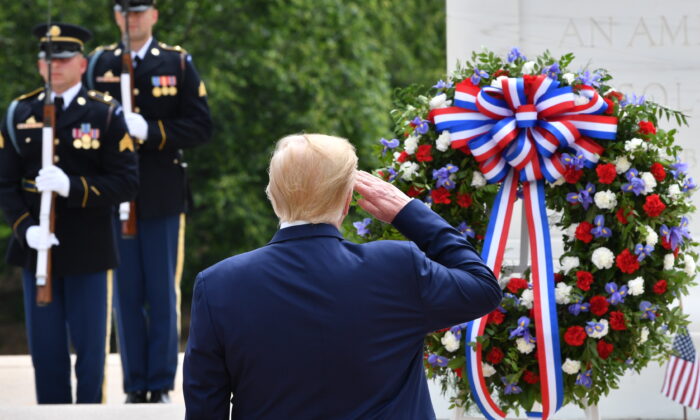 President Donald Trump salutes as he participates in a wreath-laying ceremony at the Tomb of the Unknown Soldier at Arlington National Cemetery to commemorate Memorial Day and honor those who have died while serving in the U.S. Armed Forces in Arlington, Va., on May 25, 2020. (Nicholas Kamm/AFP via Getty Images)
Politics

Former President Donald Trump issued a Memorial Day statement honoring the fallen as “unrivaled heroes” who gave their lives to protect “our sacred freedoms” and whose timeless legacy lights the path of “America’s glorious destiny.”

Trump made the remarks in a May 31 statement highlighting the debt of gratitude owed to fallen warriors of the U.S. armed forces and praised “the depth of their devotion, the steel of their resolve, and the purity of their patriotism.”

“On this Memorial Day, we remember the fallen heroes who took their last breaths in defense of our Nation, our families, our citizens, and our sacred freedoms,” Trump said.

“They made the supreme sacrifice so that our people can live in safety and our Nation can thrive in peace. It is because of their gallantry that we can together, as one people, continue our pursuit of America’s glorious destiny.

“We owe all that we are, and everything we ever hope to be, to these unrivaled heroes.”

Trump also called the legacy of those fallen soldiers “immortal” and our loyalty to them “eternal and everlasting.”

“America’s warriors are the single greatest force for justice, peace, liberty, and security among all the nations ever to exist on earth,” Trump said. “God bless our fallen Soldiers, Sailors, Coast Guardsmen, Airmen, and Marines.”

“All those we honor today gave their lives for the country, but they live forever in our hearts,” Biden said.

Biden praised the generations of service members who have “made the ultimate sacrifice” to protect the country and its ideals.

“We must honor their sacrifice by sustaining the best of America while honestly confronting all that we must do to make our nation fuller, freer, and more just,” he said.

Over 1 million American service members have died in wars and other combat actions since 1775, according to the most recent Congressional Research Service report (pdf) on U.S. military operations casualties.