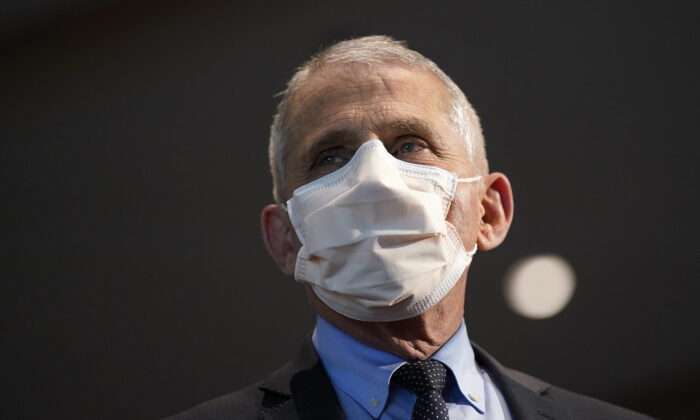 Dr. Anthony Fauci, director of the National Institute of Allergy and Infectious Diseases, said that despite falling rates, the virus can bounce back. (Patrick Semansky/Pool/Getty Images)
Viewpoints

In a controversial passage in Plato’s “Republic,” Socrates introduced the idea of the “noble lie” (“gennaios pseudos”).

A majestic fiction, he says, could sometimes serve society by persuading uninformed citizens of something good for them.

Ever since, many prevaricators have used the excuse that they lied for the common good.

Fauci misled the country about mask-wearing during the pandemic by claiming they were of little use. But he argued that he lied so the public wouldn’t make a run on masks, deplete the supply, and thus rob medical professionals of protective equipment.

Apparently, Fauci feared a lower figure, even if accurate, might lull people into complacency about getting inoculated.

Fauci also lied about his own role in routing U.S. aid money to subsidize gain-of-function viral research at the Wuhan virology lab—the likely birthplace of COVID-19.

Either Fauci was hiding his own culpability, or he believed the American people might not be able to fully accept that some of their own health officials were promoting the sort of research that was partially responsible for more than 700,000 American deaths.

Secretary of Homeland Security Alejandro Mayorkas has serially lied about the number of undocumented immigrants who have crossed into the United States. He falsely claimed mounted agents were whipping migrants. He fibbed about the purported lack of federal data of apprehensions, detentions, and deportations. His assertion that the border is secure was a joke.

Apparently, Mayorkas believes the public would go ballistic, or his own administration would be roundly despised, if he told the bitter truth about the border: by intent, the Biden administration has apparently deliberately left it wide open.

And that will likely allow 2 million undocumented immigrants into the country in the current fiscal year.

Lots of other unelected federal officials lied over the past five years by claiming or implying that harming the Trump administration was in the public interest.

Comey lied under oath on multiple occasions in congressional cross-examinations and claimed he didn’t know or couldn’t remember basic facts about his own role in promoting the Russian collusion hoax.

Apparently, Comey and McCabe believed that by being less than truthful, they might better emasculate Donald Trump. And that result would be beneficial to America.

Our former intelligence leaders may have been the most brazen liars. Former Director of National Intelligence James Clapper lied to Congress about the NSA surveillance program, although he denied it.

When caught in the untruth, Clapper reverted to the noble lie that he gave the least untruthful answer, apparently on the pretense that he didn’t wish to damage the reputation of an important intelligence agency.

Ditto John Brennan, the former head of the CIA. On two occasions, he lied under oath about the agency’s monitoring of Senate staffers’ computers and the deaths of civilians caused by U.S. drone assassination missions along the Afghanistan border.

Chairman of the Joint Chiefs Gen. Mark Milley lied for days about the details of an accidental drone strike that killed innocent women and children in Afghanistan.

Either Milley is now lying when he says he warned Joe Biden about the disasters to come in Afghanistan or Biden is lying when he denies hearing any such advice.

Many of the details of Milley’s conversations with authors Bob Woodward and Robert Costa as reported in their recent muckraking book were abjectly denied by Milley.

The list of such lies could be vastly expanded.

Former Attorney General Loretta Lynch spun an implausible yarn that she accidentally bumped into Bill Clinton on a tarmac in Phoenix and never discussed the then-current FBI investigation of Hillary Clinton.

Special counsel Robert Mueller told a whopper under oath, claiming to know almost nothing about the Steele dossier and the misadventures of Fusion GPS. Both were the two catalysts that prompted his entire investigation of “collusion” in the first place.

In some of these cases, when caught and exposed, the liars will hedge by claiming temporary amnesia.

But sometimes, they admit they lied but suggest they did so for higher purposes such as national security.

In truth, in most cases, there was nothing noble at all in their lying. They simply spread untruths to protect their own endangered careers by masking their own wrongdoing or fobbing it onto others.

In other words, “noble lies” are rarely spun for anyone’s interests other than those of the liars themselves.