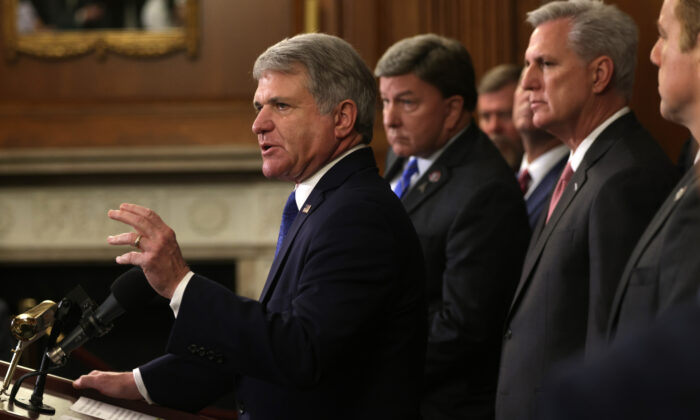 Republican Lawmakers Press Biden Administration to Get Tougher on China

Republican lawmakers are calling for the Biden administration to harden its policy toward Beijing, saying that recent remarks from senior officials revealed a failure to “grasp the true threat posed by the Chinese Communist Party.”

U.S. climate envoy John Kerry recently responded to a question about the plight of Uyghurs in China’s western Xinjiang region by saying that “life is always full of tough choices in the relationship between nations” and later that “first and foremost, this planet must be protected.”

Commerce Secretary Gina Raimondo also signaled a desire to improve U.S. business ties with China. Given the size of the Chinese market, “we need to do business there,” she told The Wall Street Journal on Sept. 24, adding that “robust commercial engagement will help to mitigate any potential tensions” and “prevent unintended conflict.”

Such remarks have prompted concern among lawmakers in the China Task Force, a grouping of House Republicans. In a Sept. 29 statement, the Republicans called for the two officials to “immediately receive a threat briefing and review the broken promises, theft of intellectual property, rampant economic espionage, and blatant coercion of American citizens”—which they said have resulted from “decades of assuming commercial engagement would prevent tensions.”

“Unfortunately, the Biden administration has not presented a clear, comprehensive approach to address the generational threat of the Chinese Communist Party,” Rep. Mike McCaul (R-Texas), who chairs the 17-member congressional panel, told The Epoch Times in an email.

Challenges posed by the Chinese regime, spanning from national security to economic, are increasingly worrying Washington.

Beijing has also quickened its pace in modernizing its military in a bid to displace the United States, the dominant military power globally, U.S. Air Force Secretary Frank Kendall warned on Sept. 20.

“While national security officials such as Director Wray and Air Force Secretary Kendall are warning about serious threats to U.S. security, other officials are repeating the debunked claim that trade and economic access can turn the CCP into a responsible stakeholder,” McCaul said.

The United States has for decades engaged with China under the thinking that the country’s economic liberalization would lead to greater political freedoms. This projection didn’t materialize, Western officials and experts say, pointing to deteriorating human rights conditions in the country. Washington began to shift to a hardline approach toward the regime under the Trump administration over issues such as Beijing’s unfair trade practices, technology theft, human rights abuses, and cyber espionage.

The Biden administration has described its relationship with China as one of both cooperation and competition. It has also emphasized fostering alliances with Western democracies to push back against the regime’s military and economic aggression. Earlier this month, the United States, Australia, and Britain created a new security partnership focused on the Indo-Pacific, a pact widely viewed as directed toward countering Beijing’s growing assertiveness in the region.

Meanwhile, the administration has maintained that it’s not seeking a new Cold War or conflict with Beijing.

“While we may take issue with some means they engage in the world, we also have areas we will want to continue to work together,” White House press secretary Jen Psaki told reporters on Sept. 20.

The United States’ recent release of Huawei executive Meng Wanzhou, which then saw two Canadians who were detained in China released shortly after, has prompted many to question whether there was a prisoner swap agreement secretly negotiated between Washington and Beijing. Beijing’s detention of the two Canadians is widely viewed as acts of “hostage diplomacy” done in response to Meng’s arrest.

Psaki has denied any links between the individuals’ release but confirmed that their cases came up during Biden’s second phone call with Xi roughly three weeks ago.

Xi in the call had blamed U.S. pressure for straining bilateral ties while Biden told Xi he sees “no reason” for “competition to veer into conflict.”

Kerry, who just traveled to China in early September, has indicated plans for a third visit in the coming weeks.

“The White House is wasting time and undermining national security by refusing to acknowledge the failed history of engagement,” said McCaul.

Sen. Tom Cotton (R-Ark.) emphasized the range of threats posed by the Chinese Communist Party in a nine-minute speech on the Senate floor on Sept. 28.

“Whether we seek it or not, China has been waging a cold war on America … and our way of life for decades,” he said. “The only question is whether we will win or lose.”

He argued that the conspicuous omission of China in Biden’s U.N. speech amounted to the president announcing “his capitulation to the Chinese Communist Party.”

“We are the global leader, not China, we don’t require China’s forgiveness or favor,” Cotton said.