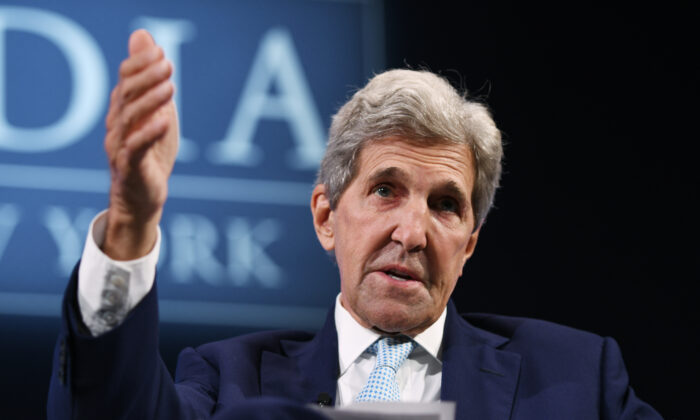 U.S. climate envoy John Kerry appeared to be indifferent to the plight of Uyghurs in China when he said “life is always full of tough choices” in a recent interview with Bloomberg.

Kerry was asked, “Clearly a priority of the Biden administration is really addressing climate, but it’s not the only priority. There are other things as well, such as the Uyghur situation in the West. What is the process by which one trades off climate against human rights?”

In response, Kerry said: “Life is always full of tough choices in the relationship between nations.”

To back up his argument, Kerry pointed to former President Ronald Reagan—who according to Kerry “thought the Soviet Union was the Evil Empire”—but went to Iceland to meet with Soviet leader Mikhail Gorbachev at the Reykjavík Summit in October 1986.

The meeting ultimately resulted in the 1987 Intermediate-Range Nuclear Forces Treaty between the Soviet Union and the United States.

“The point I’m making is that, even as there were egregious human rights issues, which Ronald Reagan called them out on, we have to find a way forward to make the world safer, to protect our countries, and act in our interests,” Kerry continued.

“We can do and must do the same thing now,” he added. “Yes, we have issues, a number of different issues [with China], but first and foremost, this planet must be protected.”

The Chinese Communist Party (CCP) is committing genocide against Uyghurs in China’s far-western Xinjiang region, subjecting them to forced sterilization, forced abortion, torture, forced labor, and the removal of children from their families. Additionally, the communist regime has detained more than one million Uyghurs in internment camps.

Uyghur and Kazakhstan national Gulbakhar Jalilova, 54, a former detainee, told The Epoch Times in 2018 that detained Uyghurs were psychologically and physically tortured, poisoned, and even killed by injection of unknown drugs.

Also in 2018, another former Uyghur detainee, a Kazakhstan national aged 54, who spoke to The Epoch Times on condition of anonymity, said young girls were being raped inside these camps and were given pills to stop them from becoming pregnant.

“Special Envoy John Kerry’s ghoulish response dismissing genocide is divorced from American values and interests, and I strongly urge him to immediately retract it,” McCaul stated.

He added: “The United States should never ignore atrocities and genocide in exchange for commitments made by the CCP on climate, especially when the CCP has a proven track record of ignoring their international commitments.

“I call on Secretary Blinken to provide a full reporting of exactly what commitments Special Envoy Kerry is making to China on behalf of the United States.”

The Munich-based World Uyghur Congress did not immediately respond to a request for comment.

One of the lists asked the United States to correct its “wrongdoings,” including revoking its sanctions on CCP officials, which were announced by the United States in response to widely reported human rights abuses.