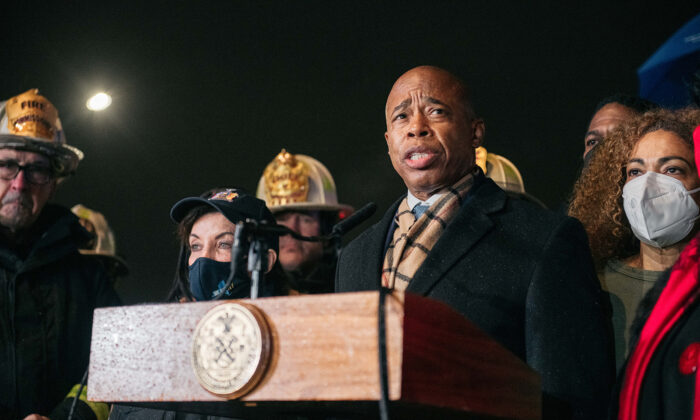 New York City Mayor Eric Adams addresses the media in the aftermath of a deadly fire at a 19-story building, in the Bronx borough of New York City, on Jan. 9, 2022. Seventeen people, including eight children, died in the blaze, according to officials. (Getty Images)
Viewpoints

“Where there is no vision, the people are unrestrained, but happy is one who keeps the Law.” (Proverbs 29:18)

Adams has endorsed a new policy that allows 800,000 non-citizens to vote in municipal elections. Republicans have filed a lawsuit contending the law violates the state constitution. It would also set a bad precedent. Trust in election outcomes is already being eroded and this law will continue the trend if it is upheld.

Mayor Adams also named his brother as Deputy NYPD commissioner. He says his brother will help protect him from “the increase in white supremacy” in the city. Excuse me? Whites are a minority in New York City. In addition to the mayor and his brother being black, so, too, is the new police commissioner, Keechant Sewell, who is also female. The new district attorney for Manhattan, Alvin Bragg, is black. More about him in a moment.

Then there is the city council. Last fall, those running included, according to Gothamist.com, “the first Muslim woman, the first South Asian members, the first openly gay Black woman, seven foreign-born New Yorkers, and more women and people of color poised to be elected than ever before. … The next New York City Council is on track to be the most diverse and the most left-leaning in the city’s history.” It is. The new council chair is also a black woman.

From such a profile one looks in vain to locate a “white supremacist” among them.

Alvin Bragg touched off a firestorm of criticism when he announced a “stay out of jail” free card for people who commit certain criminal acts. Business leaders are meeting with him hoping to change his mind. They have a good case to make as crime in the city is rising quickly and adding to the fears and restrictions associated with the pandemic, which has hurt many businesses. Tourists are less likely to come to New York if they believe it is unsafe.

One recent crime has helped focus attention on the consequences of lax law enforcement. A 19-year-old cashier at a Burger King in East Harlem was shot to death after giving the robber $100 from her cash drawer. News reports say the young woman, Kristal Bayron-Nieves, had told her mother she didn’t feel safe working there because she feared “the 50 homeless people outside.” Her mother urged her to go to work anyway and now, reports The Daily Mail, is understandably “racked with guilt.”

Mayor Adams responded to the murder by invoking the familiar progressive line about the need to end “gun violence.” The cavalier attitude toward crime and the message sent to criminals in New York and other cities where progressives are in charge is that they can get away with things that once resulted in their arrest, prosecution, and incarceration.

It should not go unreported—but mostly is by the media—that billionaire George Soros has contributed millions to the campaigns of progressive district attorneys across the country. Such outside money, even when funneled through nonprofits in America, should be illegal, but money to politicians is like blood to Dracula and it will take massive public outrage to prohibit it.

First impressions are critical for someone who is new to office (consider President Biden’s unexpected progressive policies resulting in a rapid decline in his approval numbers). The first impressions made by Mayor Adams are not good. New York was once known as “Fun City.” It is rapidly becoming gloomy and as it was in the 1970s, an increasingly dangerous place to visit and live.