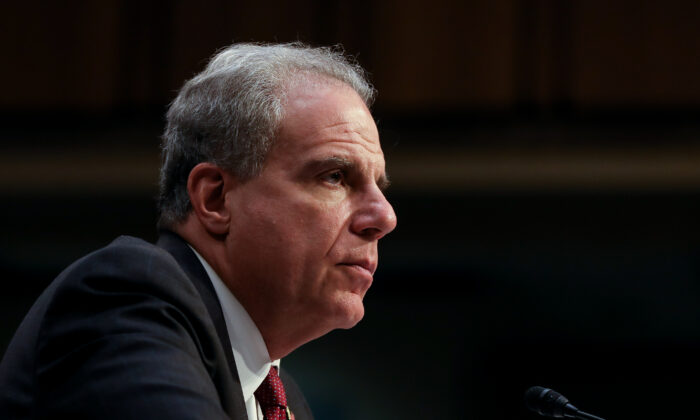 The Department of Justice’s inspector general should investigate how The New York Times came into possession of files from Project Veritas shortly after the FBI raided the journalist outfit, a former federal prosecutor says.

FBI agents recently raided homes linked to Project Veritas, including the home of its founder, James O’Keefe. The NY Times messaged Project Veritas about the pre-dawn raids as they were wrapping up, lawyers for the nonprofit said in a court filing.

Former prosecutor Andrew McCarthy says that decision may stem from the apparent leak to the NY Times. He said the judge should be infuriated by the apparent leaks and should immediately take action.

“The judge should order the SDNY’s Biden-appointed U.S. attorney, Damian Williams, to provide the court, immediately, with affidavits detailing communications with the media from every prosecutor, FBI agent, and support staffer who is either involved in the investigation or has had access to the items seized from the current or former PV officials,” the National Review writer wrote in a column, referring to Project Veritas and the Southern District of New York.

He also called for Attorney General Merrick Garland to refer the matter to Department of Justice (DOJ) Inspector General Michael Horowitz for a “thorough investigation.”

“Garland and Horowitz should announce that the Justice Department will conduct the investigation requested by the court, and Horowitz should be given the affidavits so his office can hit the ground running. Judge Torres should ask for periodic updates to stress to the Justice Department and FBI that the court is troubled by the government’s apparently pretextual exploitation of coercive judicial processes in order to fuel media coverage. That coverage has imperiled the constitutional rights of PV members to freedom of the press, due process, privacy, and assistance of counsel,” he added.

Project Veritas lawyers said in court filings that the government leaked details of its investigation to the NY Times, noting how queries were sent to O’Keefe shortly after the predawn raids, which took part on two different days.

Additionally, NY Times stories about the searches “included information that could have only come from the government,” one filing stated.

“It’s clear that The New York Times was leaked the information from the federal government about the raids,” Harmeet Dhillon, one of the lawyers, told The Epoch Times.

The NY Times also published an article based on what it described as internal Project Veritas documents, including a series of memorandums written by a lawyer for the group about how to conduct legal journalism.

That publication was met with shock by some, who noted that Project Veritas is currently engaged in a lawsuit against the NY Times.

Project Veritas sued the paper last year, asserting several of its articles were defamatory. A motion to dismiss the case was rejected by a judge in March, who found that NY Times writers deceptively interjected their opinions into the articles.

While it’s not certain the privileged documents were leaked by prosecutors or the FBI, the publication came shortly after the government began drawing from seized electronic devices.

The leaks are a major reason a special master should be appointed to sift through the records and separate out privileged ones, Project Veritas asserts.

In filings Monday, the lawyers demanded the government respond to whether officials leaked the information.

The FBI, the U.S. Attorney’s Office for the SDNY, the Department of Justice’s inspector general, and an NY Times spokeswoman did not respond to requests for comment. The NY Times reporters who wrote the stories either couldn’t be reached or did not return messages.

The NY Times does not say in its story how it got the privileged documents. The story about the raids sourced “witnesses and people briefed on the matter” and included a quote from an FBI spokesman.

The FBI confirmed the raids to The Epoch Times in an earlier email but declined to say why they were carried out, and against whom.

The raids were said to be part of a government search for a diary belonging to Ashley Biden, President Joe Biden’s daughter. Project Veritas says it was given the diary by two people but decided against publishing it because it could not confirm its legitimacy. The diary was ultimately passed onto local law enforcement in Florida, the group says. The National File website previously published what it says is the diary.

Will Chamberlain, a lawyer who co-publishes Human Events, called the apparent collaboration between the FBI and the NY Times a “scandal” and said Adam Goldman “should be subpoenaed tomorrow and forced to reveal his criminal source.”

“I didn’t even think about the fact that PV is currently in litigation with the New York Times. Makes it all the more appalling that the NYT would be publishing Veritas’ privileged communications,” he wrote on Twitter.