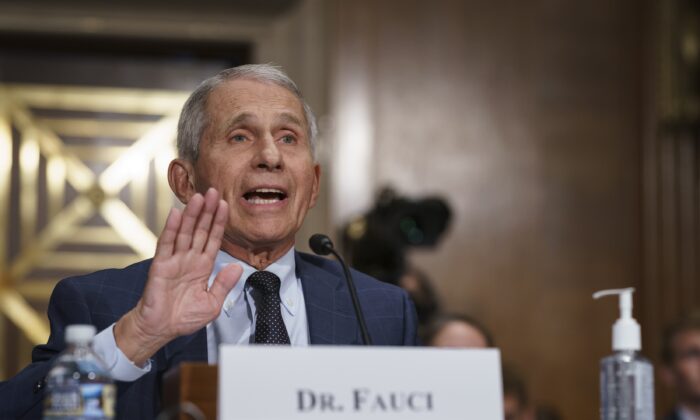 It Is Time for Dr. Fauci to Retire

Dr. Anthony Fauci, who is 80, has had an extraordinary career. As the head of the National Institute of Allergy and Infectious Diseases, he has both engaged in and supervised a remarkable range of research including HIV/AIDS in the 1980s. One of his sharpest and most aggressive critics about the AIDS crisis, Larry Kramer, ended up saying Dr. Fauci was “the only true and great hero” among the government researchers trying to find a cure for HIV. Fauci himself has said “my career and my identity has really been defined by HIV.”

Dr. Fauci has been a leading researcher saving lives and a leading health administrator spending billions of taxpayer dollars on groundbreaking studies. The most recent NIAID budget is $6.1 billion, and Fauci has been administering that budget since 1984 (37 years).

The fact is: Dr. Fauci was one of the most effective, indeed brilliant medical researchers of the last century. However, he is now so absorbed in defending the indefensible that he can best serve the country by stepping down.

Dr. Fauci forecast his own problems in an Oct. 9, 2012 article in the American Society for Microbiology. Written in true scientific fashion, the average citizen is unlikely to read a short study entitled “Research on Highly Pathogenic H5N1 Influenza Virus: The Way Forward.”

This article from nearly nine years ago predicted the kind of problem that might be posed by scientific research on a dangerous, highly contagious virus that could potentially spread rapidly as a pandemic with devastating consequences.

The scientific community had already recognized that researching potential pandemic creating viruses was a dangerous process. In fact, Dr. Fauci was writing during a moratorium on this kind of research imposed by the researchers themselves.

His comments add up to a tragic forecast of what was not done, and a condemnation of the path taken at the Wuhan Institute of Virology—even though Fauci and his team were supposedly monitoring and funding the Chinese lab.

“In an unlikely but conceivable turn of events, what if that scientist becomes infected with the virus, which leads to an outbreak and ultimately triggers a pandemic? Many ask reasonable questions: given the possibility of such a scenario— however remote—should the initial experiments have been performed and/or published in the first place, and what were the processes involved in this decision?”

Back then, Dr. Fauci already recognized that dealing with the potential for a worldwide pandemic that might kill millions, incur enormous dislocations in the economy, and impose extraordinary restrictions on citizens the “potential benefits and risks of these experiments must be discussed and understood by multiple stakeholders, including the general public, and all decisions regarding such research must be made in a transparent manner.”

Fauci knew that decisions that affect billions of people cannot be made by scientists on their own. He warned his fellow scientists in 2012, “We cannot expect those who have these concerns to simply take us, the scientific community, at our word that the benefits of this work outweigh the risks, nor can we ignore their calls for greater transparency, their concerns about conflicts of interest, and their efforts to engage in a dialog about whether these experiments should have been performed in the first place. Those of us in the scientific community who believe in the merits of this work have the responsibility to address these concerns thoughtfully and respectfully.”

Nine years ago, Dr. Fauci knew that pandemic creating research required a new standard of transparency and candor. As he wrote:

“[T]he influenza virus research community can no longer be the only player in the discussion of whether certain experiments should be done. Public opinion (domestic and global) and the judgments of independent biosafety and bio-security experts are also critical. If we want to continue this important work, we collectively need to do a better job of articulating the scientific rationale for such experiments well before they are performed and provide discussion about the potential risk to public health, however remote. We must also not rule out the possibility that in the course of these discussions, a broad consensus might be reached that certain experiments actually should not be conducted or reported.”

The principles Dr. Fauci had outlined were right. The practice which followed failed to meet those principles.

It is impossible to have transparency with the Chinese Communist Party’s dictatorship. That is why as recently as this week the Chinese dictatorship announced it would block any effort to investigate the Wuhan lab. This is almost two years after COVID-19 likely emerged and began infecting people in China.

The more than $826,000 the National Institutes of Health funneled to the Wuhan laboratory through the EcoHealth Alliance was apparently not accompanied by any serious controls. Fauci and the U.S. government relied on Chinese promises of “doing the right thing.” When the crisis broke, none of the research the American taxpayer paid for had been copied and placed in American hands.

Just for trusting the Chinese dictatorship Dr. Fauci should retire.

The failure to be honest from day one about American government involvement in the Wuhan laboratory would be a second reason for Dr. Fauci to resign. He should have briefed the President and Vice President, the Congress, and then the country on what we had funded in Wuhan.

Instead of the transparency Fauci called for in his 2012 article, we got a cover up, obfuscation, and argument.

Even today, we really don’t know what happened to the money or what research it funded.

By his own standards, Dr. Fauci has failed and should retire.