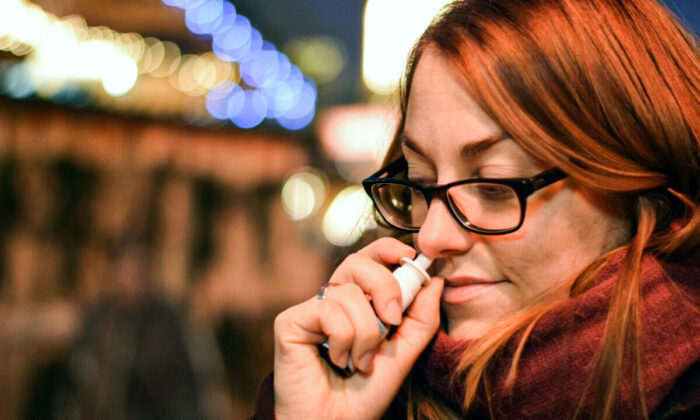 A battle is on in the courts over whether certain nasal sprays can be used as a treatment, or preventative, for COVID 19. (Thorsten Frenzel/Pixabay)
US News

The leading U.S. manufacturer of xylitol-based products says the federal government is deliberately trying to conceal a nasal spray it developed that it says has been scientifically proven to be effective in treating and preventing COVID-19.

The U.S. Department of Justice filed a lawsuit in federal court against Utah-based company Xlear on Oct. 28, saying it has deceptively advertised its nasal spray as a treatment and preventative of COVID-19.

The lawsuit asks a federal court to permanently ban the company from promoting the nasal spray as a treatment for COVID-19 and also asks that monetary penalties be levied against it.

“Companies can’t make unsupported health claims, no matter what form a product takes, or what it supposedly prevents or treats,” said Samuel Levine, director of the trade commission’s Bureau of Consumer Protection, said in a press release on the lawsuit.

“That’s the lesson of this case and many others like it, and it’s why people should continue to rely on medical professionals over ads.”

The commission and the Justice Department declined to make any further comment.

Xlear’s attorney Robert Housman, of the Washington firm Book Hill Partners, told The Epoch Times that the commission is “flat out lying” about the company’s claims being unsupported.

Housman pointed out that the National Institute of Allergy and Infectious Diseases (NIAID)—along with the National Institutes of Health (NIH), an arm of the Department of Health and Human Services—funded clinical studies of the use of nasal sprays like Xlear’s and published findings last year that found they were an effective treatment and method of prevention for COVID-19.

“When Xlear tells people about scientific studies, even ones republished by the NIH, we are somehow misleading people and making false claims. It’s nonsensical,” Housman told The Epoch Times. “Rather than embrace nasal interventions, the government is trying to eliminate their use because they don’t fit the government’s highly flawed, vaccine-only agenda.”

On Sept. 20, 2020, the NIH and NIAID published the findings of a random clinical trial they funded at the Vanderbilt University Medical Center in Tennessee on the merits of using hypertonic nasal saline irrigations to combat the CCP virus.

The researchers in that study wrote that the “effect of nasal irrigation on symptom resolution was substantial,” reporting that “nasal congestion and headaches in COVID patients resolved an average seven to nine days earlier” in the study group.

“Our analysis suggests that nasal irrigations may shorten symptom duration and may have potential as a widely available and inexpensive intervention to reduce disease burden among those affected,” the researchers wrote in their findings.

“We would advocate the use of hypertonic nasal saline irrigations in non-hospitalized COVID-19 patients as a safe and inexpensive intervention to reduce symptom burden.”

Housman pointed out that the NIH also published the results of a clinical trial, held a few months later in November at the Larkin Community Hospital in Florida, that found the Xlear nasal spray specifically cleared symptoms of the disease in half the time.

In addition to the Tennessee and Florida trials, another random clinical trial—more recently conducted at Augusta University’s Emergency Department in Georgia—also concluded that the use of nasal spray was beneficial in treating COVID-19.

Researchers in the university trial, which is still ongoing, have so far found that patients with the CCP virus that participated in daily nasal irrigation were eight times less likely to be hospitalized than the national rate.

The Justice Department didn’t specifically cite the Larkin, Vanderbilt, or Augusta trials in its lawsuit.

It instead cited the results of lab studies conducted earlier at the University of North Carolina–Chapel Hill and the University of Tennessee involving in vitro and animal testing, neither of which the DOJ and FTC argue is a viable way to test nasal spray for live, human COVID-19 patients.

The lawsuit additionally pointed out that the University of Tennessee study is based on a nasal spray containing iota-carrageenan, which the Xlear spray does not contain and, therefore, cannot be used as scientific evidence to support Xlear’s claims.

The lawsuit also stated that researchers at Chapel Hill admitted that without further research it couldn’t conclusively determine that  “administering treatment through the nose is the best way to treat COVID-19.”

Housman said the trade commission cherry-picked findings within the lab studies to make them fit its agenda.

The federal government has warned companies against promoting nasal sprays for the treatment and prevention of COVID-19.

BlueWillow Biologics, a Michigan biopharmaceutical company that manufactures a nasal antiseptic, and the Miami-based company Halodine, which created a proprietary iodine-based nasal antiseptic swab, both received warning letters earlier this year from the FDA to discontinue their promotion of their nasal products as a safe and effective treatment for COVID-19.