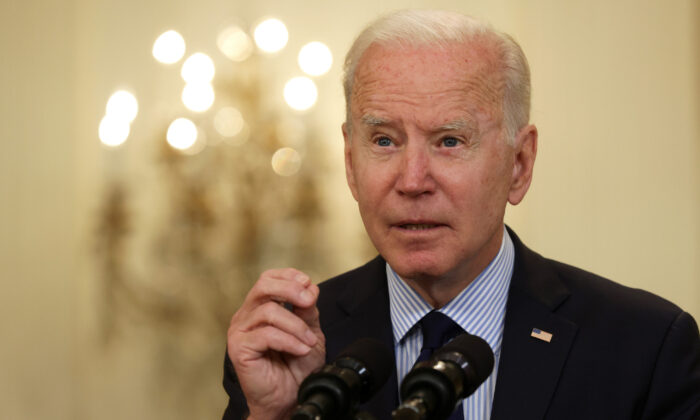 President Joe Biden speaks at a press conference at the White House on May 7, 2021. (Alex Wong/Getty Images)
Executive Branch

President Joe Biden and Treasury Secretary Janet Yellen on May 7 sought to fend off claims that the enhanced unemployment boost was creating a disincentive for people to take jobs, after a wave of criticism to that effect following the disappointing May 7 employment report, which showed a sharp slowdown in hiring despite job openings at near-record levels.

Biden was asked at a press conference on May 7 whether the federal $300 weekly jobless benefit top-up—above and beyond what states provide—had any effect on diminishing a return to work.

“No, nothing measurable,” Biden said, arguing that recovery from the pandemic recession would be a “marathon,” not a “sprint,” and that although “we still have a long way to go” before the labor market recovers, “this month’s jobs numbers show we’re on the right track.”

His remarks came on the heels of the Labor Department’s jobs report, which showed that U.S. private employers added just 266,000 jobs in April, a sharp drop from March’s job gain of 770,000. The report also showed the unemployment rate ticked up to 6.1 percent from 6 percent, while job openings are at near-record highs, suggesting that available jobs are simply not being filled.

Republicans have cast the report as a sign of failure for Biden’s policies.

“This is a stunning economic setback, and unequivocal proof that President Biden is sabotaging our jobs recovery with promises of higher taxes and regulation on local businesses that discourage hiring and drive jobs overseas,” said Rep. Kevin Brady (R-Texas), the top Republican on the Ways and Means Committee, in a statement. “The White House is also in denial that many businesses—both small and large—can’t find the workers they need.”

The U.S. Chamber of Commerce added to the blowback, calling for an end to the $300 jobless supplement, which is due to expire in September.

Rep. David Kustoff (R-Tenn.) made a similar argument when commenting on May 7’s lackluster jobs report in an interview on Newsmax, saying that many small business owners have told him, “We cannot get people to come to work.

“The federal government has provided essentially a disincentive to want to find jobs, to want to work, and so that jobs report does not surprise me.

“I think we’re going to see more of that, where people are going to say, ‘Look, I can make almost the same money by staying at home rather than going to work. Why do I need to go to work?’”

Biden pushed back against that argument, telling reporters on May 7, “Today’s report is a rebuttal to loose talk that Americans just don’t want to work.

“I know some employers are having trouble filling jobs. But what this report shows is that there’s a much bigger problem, notwithstanding the commentary you might have heard this morning. It is that our economy still has 8 million fewer jobs than when this pandemic started,” Biden said, while reiterating his call for Congress to approve more spending—in the form of the American Jobs Plan and the American Families Plan—which the president argued would create more jobs and get people back to work by helping with child care costs.

Yellen, speaking at a press conference on May 7, similarly sought to dismiss claims that the weekly jobless top-up was discouraging people from taking jobs.

“We saw a promising growth of 331,000 jobs in leisure and hospitality, which includes the restaurants and bars that have been so badly battered by this pandemic,” she said.

The report’s 266,000 overall job growth figure is a net number, with April employment in some categories seeing declines, such as motor vehicles and parts manufacturing (-27,000) and temporary help services (-111,000).

Meanwhile, restaurant owners and managers from New York, California, Washington, and Chicago told The Epoch Times that hiring woes have become a nightmare, in addition to a spate of other challenges such as indoor occupancy rules.

Hudson Riehle, senior vice president for research at the National Restaurant Association, said hiring difficulties in the sector are surging.

“When it comes to recruiting workforce, in January, seven percent of restaurant operators rated recruitment and retention of workforce as their top challenge; by April, that number had risen to 57 percent,” Riehle told The Epoch Times.