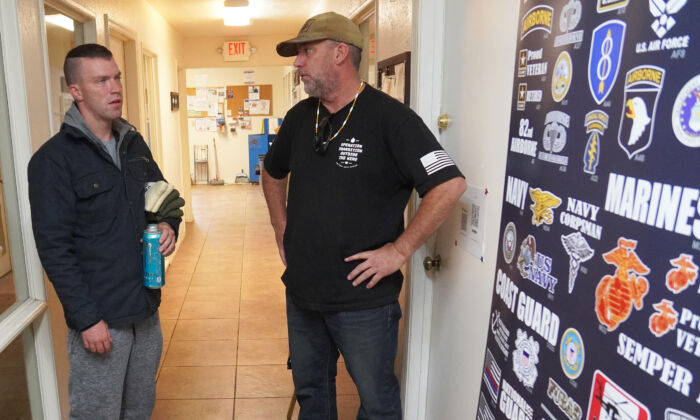 Tom West (R) founded Operation Transition Outside the Wire in August. Here, he speaks with one of his clients, Brendan Bosley, at the nonprofit's coffee production facility in Williams, Ariz., on Oct. 20. Proceeds from the sale of coffee go to support programs and services. (Allan Stein/Epoch Times)
US News

Leave no soldier behind—or out in the cold.

That’s been the motto of former U.S. Marine Lance Cpl. Tom West with each pound of roasted coffee he’s bagged and sold as founder and president of Operation Transition Outside the Wire.

Based in Williams, Arizona, the nonprofit was launched in August. Its main purpose is to help struggling veterans stay off the streets and move on to better things.

Selling coffee is only a means toward helping veterans reach their destination, he said.

“It’s really tough. Once you’re out on the streets,” the challenge is to “get yourself back off the streets,” West told The Epoch Times.

According to endhomelessness.org, 37,252 veterans were experiencing homelessness in 2020 amid the pandemic caused by the CCP virus. The vast majority—more than 90 percent—are men, and half of them live outside of shelters.

West and his partner in the nonprofit, Shannon Francis, have both witnessed firsthand the plight of homeless veterans in California, as each morning, the veterans would gather outside of their coffee shop in Long Beach. They’d be given a free cup of coffee and any other help they needed. That continued until early 2020, when the shop was forced to close due to the pandemic.

“We got rid of our coffee shop at the end of March and we got rid of everything,” West said. “The pandemic just wiped us out.”

West said he got to know many of the homeless veterans personally. It often began with a friendly: “Hey, brother. Can you spare a free cup of coffee?”

Other veterans, however, were too proud to accept the couple’s help, because “the military teaches you to be tough,” he said.

“I was 17 when I went in. We see things we shouldn’t have to. We see death. When we get back to civilian life, it’s the inverse of that. We have to figure things out for ourselves.”

West and Francis eventually decided to leave California for Williams, Arizona, a locale known for supporting veterans. The town’s iconic Route 66 downtown district seemed the perfect spot to launch a nonprofit like Operation Transition, he said.

The organization is currently undergoing major expansion on a 130-acre ranch, situated on the outskirts of town. Once it’s completed, the working ranch will host 25 large safari-style tents that will serve as homes for veterans and their families.

There will also be a coffee roasting and distribution facility located on-site, a mess hall, educational labs, and a ministry setup, all nestled within a safe, structured environment.

West said the goal is to increase production to 15,000 pounds per month and boost membership subscriptions to increase revenues. All proceeds go to support transitional programs and other forms of assistance for veterans, he said.

West said each one-pound bag of coffee comes with an ornamental dog tag and logo for easy identification in participating stores. The price per bag is a $20 donation.

Brendan Bosley of Owosso, Michigan, is among those receiving crucial support. He joined the Air Force in January 2019 and served as an analyst while stationed in Alaska, he told The Epoch Times.

But when the number of analysts exceeded the demand, he was offered, and accepted, an honorable discharge in late August as well as a heartfelt “Thank you for your service—see you later.”

His situation has been dire ever since.

The 29-year-old veteran said he’s living out of a hotel room in Williams accompanied by his fiancée, his terminally ill mother, and two children from a previous marriage, and is almost out of money.

His hope is to stabilize his situation and then look for a job.

“In my personal situation, I’ve got a lot of needs, and everything is important,” Bosley said. “In my situation, I still need help.”

One day, Bosley noticed the big mural sign over the Operation Transition building that reads “Freedom Is Not Free.”

Something told him to go inside.

There, he met West, who explained the many programs and services available for veterans.

Now Bosley is getting the help he needs and is slowly putting his life back together, thanks to Operation Transition.

“Coming to this town was the best thing I could have ever done. It has literally been a life-saver,” he said.

West and Francis say Operation Transition seeks to address the dual problem of veteran homeless and suicide on a personal and local level. They see the crisis only getting worse as thousands of veterans face dishonorable discharge for refusing to comply with the military’s COVID-19 vaccine mandate.

Francis says she hopes the government will wake up and do more to help out these men and women who have served their country.

West said more than 27 veterans commit suicide in America every day on a battlefield of homelessness and despair.

“In the military, there is a saying ‘no man left behind,’ and in these days, some men get left behind,” he said.

“We are trying to prevent them from going down the wrong road. We are stepping up in the right way,” giving veterans a sense of purpose, because “having purpose is a big thing in the military.”