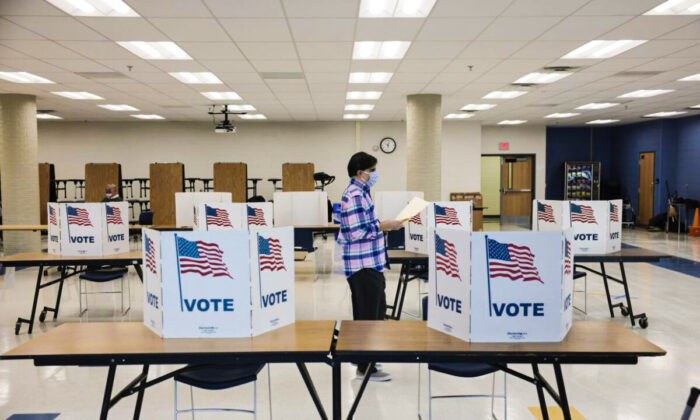 After the Virginia GOP and others claimed that voters in Virginia were told they would be prohibited from entering polling locations if they don’t wear a mask, Virginia Department of Elections Commissioner Chris Piper wrote on Tuesday that election workers cannot mandate masks as a requirement to vote.

“We have gotten several reports of voters either being turned away or being made to wait until the polling place is clear before being allowed to vote if they refuse to wear a mask,” Piper said in an email to other poll workers, posted online by Republican Party lawyer Harmeet K. Dhillon and former Trump campaign lawyer Jenna Ellis

“You may not turn voters away because they are not wearing masks,” Piper continued. “While masks are encouraged, every eligible voter is entitled to cast a ballot at their polling place,” he continued, adding: “It is not sufficient to offer curbside voting as an alternative.”

Citing state law, Piper said curbside voting is only available to individuals aged 65 and older or those with a disability. The Epoch Times could not immediately confirm the authenticity of Piper’s email to his staff.

Earlier in the day, the Virginia GOP said it received reports of voters who were told by election workers to wear a mask before entering polling locations.

“To be clear,” the Republican Party wrote,” if someone is not wearing a face-covering they may NOT be turned away or refused their right to vote.”

The Virginia GOP did not elaborate on the details, including the polling locations that allegedly refused voters who weren’t wearing masks.

“Masks are NOT required to vote. There is no mask mandate in Virginia,” the party also said.

American Conservative Union Chairman Matt Schlapp, whose organization heads the annual Conservative Political Action Conference (CPAC), wrote on Twitter that he was told that Virginia voters would be turned away if they showed up without a mask.

“I was told at my polling station I couldn’t vote without a mask. Knowing what the GOP thinks about masks, isn’t this just an illegal barrier to voting? But I can count on one thing our judges will do nothing,” he tweeted.

Schlapp told the Washington Examiner that he cast his ballot at George Mason Elementary School in Alexandria, adding that he “couldn’t enter the school” to vote unless he wore a mask.

In October 2020, Piper told the Virginia Mercury that the state cannot prohibit anyone from entering a polling location over mask mandates.

“If voters do not have a mask they will be asked to wear one and possible could be offered a mask if there are extra and be offered the opportunity to vote curbside,” Piper said at the time “Ultimately, a voter will not be turned away if they are not wearing a mask but the department strongly encourages them to do so to keep themselves and others around them safe.”

According to Virginia state law, it is illegal to “hinder or delay a qualified voter in entering or leaving a polling place,” a misdemeanor carrying a fine of up to $2,500 or up to one year in jail.