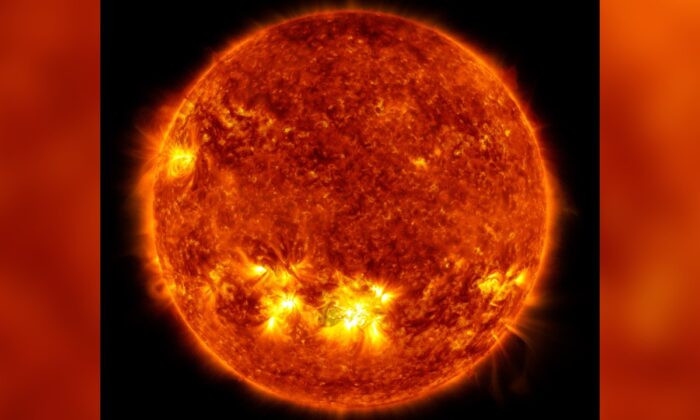 A large coronal mass ejection (CME) is expected to collide with the Earth’s magnetic field on Oct. 30 following an incredible solar flare eruption on Thursday.

The sun unleashed an X1-class solar flare, its most powerful kind of flare, on Thursday. It peaked at 11:35 a.m.EDT (1535 GMT), according to an alert from the Space Weather Prediction Center (SWPC).

A coronal mass ejection (CME), also known as a solar storm, occurs when a large mass of plasma and highly magnetized particles violently eject from the sun. Large CME’s can contain up to a billion tons of matter and can get accelerated to large fractions of the speed of light.

When the Earth is in the direct path of a CME, these magnetized and charged solar particles interact with the Earth’s magnetic field, producing geomagnetically induced currents (GIC) that can potentially disrupt communication satellites and long-distance cables that provide the world with the internet.

A direct hit with the Earth can also lead to major geomagnetic storms resulting in stunning aurora borealis and aurora australis light shows if skies are clear.

Thursday’s solar flare caused temporary radio outages across much of the western hemisphere for a period, centered on South America, according to data from NOAA’s Space Weather Prediction Centre.

“POW! The sun just served up a powerful flare,” NASA officials wrote on Twitter alongside a photo of the flare.

SpaceWeatherLive shared images of the solar flare on Twitter and confirmed that the eruption was accompanied by a CME that could collide with Earth’s magnetic field in the coming days.

“This looks to be a major coronal mass ejection and we might be in for a significant geomagnetic storm this weekend,” SpaceWeatherLive said.

We have one frame now showing the X1 CME as seen by SOHO/LASCO but just wow. This looks to be a major coronal mass ejection and we might be in for a significant geomagnetic storm this weekend. More info later but we are impressed!

The UK’s Met Office Space Weather Operations Centre (MOSWOC) confirmed that a large CME has been analyzed and is expected to arrive at Earth later on Saturday.

“A glancing impact from a passing CME is also possible late Day 2 (Saturday) or early Day 3 (Sunday) but is low confidence. No other CMEs are currently expected to arrive at Earth. Otherwise, solar winds are expected to remain mostly at background through the period,” the Met office said, adding that minor geomagnetic storms are also expected but would subside by Sunday.

“The auroral oval is expected to be at or near background levels initially. Any aurora is only likely to be visible at high latitudes. On the 30th the auroral oval is expected to become enhanced. Sightings are likely (cloud permitting) across Scotland, Northern Ireland, and Northern England. There is a slight chance of aurora visible as far south as North Wales, Midlands, and Norfolk,” the Met said.

Auroras may also be visible from many northern states across the U.S. possibly even into the center of the country, including some visibility in Nebraska and Iowa, WOWT 6 News reports.

Space Weather Physicist Dr. Tamitha Skov also confirmed the X-flare was headed towards Earth and could lead to powerful blackouts, just in time for Halloween.

“A Direct Hit for #Halloween! The #solarstorm launched during the X-flare today is indeed Earth-directed! NASA predictions confirm impact by early October 31. Expect #aurora to mid-latitudes, as well as #GPS reception issues and #amateur radio disruptions on Earth’s nightside,” she said on Twitter.

Scientists at Nasa expect the Sun’s activity to ramp up toward the next predicted maximum in July 2025, meaning more flares, and potentially more aurora sightings, are likely to occur.