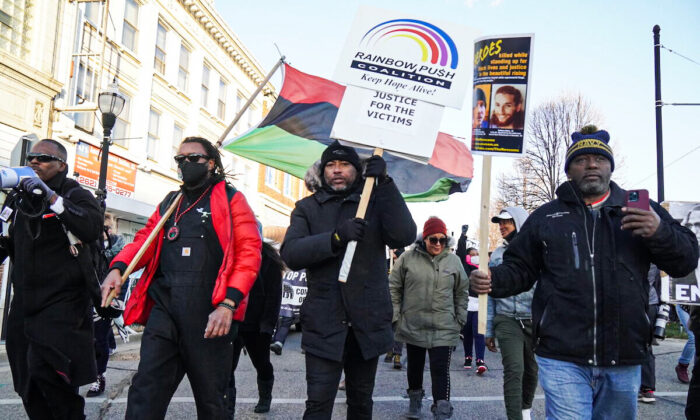 Protesters opposed to Kyle Rittenhouse’s acquittal by jury marched today in Kenosha, chanting that they would “Take these [expletive] streets.”

At 2 p.m., the scheduled start for the protest, around 20 people were already standing in the main square in front of the courthouse. Eventually, a crowd of about 100 people had gathered. Most came from Chicago, Kenosha, and Racine.

The march and protest were peaceful and well-armed. At least six people had rifles, pistols, or both. Some of the people carrying guns also wore masks.

Linda, a protester and Kenosha resident, said the gun-wielding protesters told her they were there to “secure the area.”

In the park, protesters chanted, “If we don’t get it, shut it down.”

“I hate this town,” said one protester, an old woman living in Kenosha. She had momentarily joined the protest while walking past.

After waiting for more people to gather in the park, the protesters moved into the streets. When police ordered them to confine their protest to one lane, they refused. Instead, they blocked all traffic on one side of the street.

“Come on man, you can’t tell us how to protest,” one said to the police.

The Kenosha police did nothing to make them obey.

The protest first stopped at a car lot that burned in last year’s riots.

“Look at these beautiful cars to our left. Last time, they were lit up in our fires,” said Justin Blake, the uncle of Jacob Blake.

For a moment of tension, the crowd waited by the car lot, unsure of what the next move would be.

“This time, we’re gonna let them sit there,” Blake said. He had suggested for protesters to boycott wealthy businesses instead to make a statement, although it’s unclear how boycotting Kenosha’s businesses will change the outcome of either the Rittenhouse case or the shooting of Jacob Blake.

Then, the protesters walked downtown, carefully avoiding the majority-African American neighborhoods that had been torched last time.

“The next place we [sic] going is downtown because they don’t have the right not to understand our fury,” Blake said.

Along the way, a shrill, almost-hysterical sounding female protester led a chant.

“Say their names!” she screamed.

“Anthony and Jo-Jo!” the crowd roared.

There were no counter-marchers, only a few hecklers. One man passed by on a truck and yelled defenses of Rittenhouse into a microphone as he drove around the square. At times, he blasted the crowd with siren noises.

Blake marched at the head of the protest, waving the flag of the Universal Negro Improvement Association (UNIA). UNIA was founded by Marcus Garvey. Garvey was a black separatist who met with the Klu Klux Klan because he believed African Americans and white Americans should be separate.

At a Friday planning meeting for the Sunday protest, various activists cheered as a city alderman said he didn’t care if white people killed other white people.

Some people who joined the protest said they were not affiliated with the Garvey-ites and seemed offended by their beliefs.

When Linda first heard that the protest had ties to Garvey-ites, she looked shocked. She said she didn’t know how radical the protesters were.

Others defended the controversial legacy of Marcus Garvey.

Rev. Erik Carlson, a trustee at Kenosha’s Bradford Universalist Unitarian Church, said he would not speculate on the motivations of the Garvey-ites. He said that characterizing Garvey as a racial separatist was an oversimplification.

“I would be happy to answer questions about me, my philosophy,” he said.

Blake ended the protest by thanking the men who had died attacking Kyle Rittenhouse.

Protesters also chanted, “We love you.”

“If we can use solidarity, all the issues of the African American community can be met,” Blake said in his closing remarks as he waved high his banner designed by a black separatist.