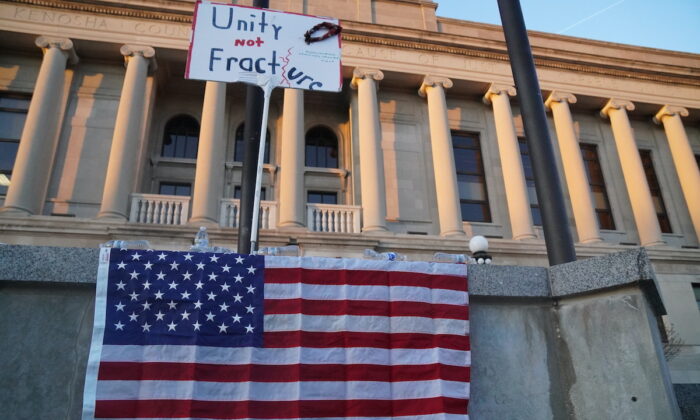 KENOSA, Wisconsin—After jurors declared Kyle Rittenhouse not guilty, Kenosha remained peaceful, but another wave of protests may be on the horizon.

After the verdict, most of the protesters trickled away from the courthouse. The few that were left banged a drum and hoisted a banner for “Real Revolution.”

From the way they carried the banner, it seemed they were trying to march.

But without enough people to follow them, their eight-man parade struggled to gain traction.

Strangely, pro-Rittenhouse protesters with “Free Kyle” signs also continued to shout into megaphones even after Rittenhouse had been freed.

Tom Heineman, a retiree, said he had enjoyed his time exchanging insults with the protesters at the Rittenhouse trial.

“I’m here for the hilarity of the Roman carnival circus, because most of these people don’t make any sense,” he said.

By 4 p.m., barely anyone besides media remained in the square in front of the courthouse.

One of the most determined protesters was Abdullah Shabazz, a representative of the Universal Negro Improvement Association (UNIA), a group started by African American Marcus Garvey in 1914.

Garvey was a black separatist who met with the Klu Klux Klan because he believed African Americans and white Americans should be separate.

“We shouldn’t be out here rioting and protesting,” said Shabazz. “We should just observe.”

Despite the low protester numbers, the whole town seemed on high alert. At least four helicopters hovered overhead during the afternoon, while police stood at attention at the courthouse front doors.

For many Kenoshans who dreaded riots, the calm was a welcome relief.

But the protesters may still have a last word to get in.

Radicals by the Railroad

As darkness fell, many of the people who had protested at the courthouse met together at an empty lot by train tracks on Kenosha’s 52nd street. The location was near the Boys and Girls Club, a community development organization.

One man played a guitar and sang sad songs, while several people shuffled past a buffet table that included vegan food.

“Anyone else vegetarian or vegan?” one woman at the gathering asked.

Several people with guns attended, including one with a scoped rifle and one man in body armor who had a pistol at his side.

The pistol-wielding man, who remained anonymous, said he was trained as an emergency medical technician and that many people felt traumatized by Rittenhouse’s verdict. He also said he had known Anthony Huber, although not well.

“We don’t want another wannabe Kyle or something showing up,” he said. “I’m just keeping my community safe.”

He also had a patch on his backpack that parodied the “Don’t Tread on Me” flag. It read, “We will tread where there is inequality.”

Many of the people in attendance said they believed that if Rittenhouse had been African American, he would never have arrived at trial alive.

“We have to assume everyone’s innocent right away,” one attendee said of the trial.

“Let’s see what non-white person this argument would have worked for,” said another.

“They’re gonna throw him under the jail,” another said, referring to a hypothetical African American man in Rittenhouse’s situation.

About 24 people attended this meeting, including Shabazz and other Garvey-ites.

“Marcus Garvey was the first Black Panther put into existence, literally,” Shabazz said to an approving circle of people.

“We believe in eternal race first,” he said. “But it does not mean we promote or advocate racism. We are totally against that.”

Despite the solid insistence of Garvey-ites that they weren’t willing to actively protest for white people, several people listening with approval to Shabazz were white.

A speaker announced that everyone at the meeting should bring two to five people to protest at 2 p.m. on Sunday “here” in Kenosha.

“I’m saying that you ain’t got to destruct nothing,” one activist speaker said. “Do what you do.”

“Don’t bring your ass here unless you drag in two to five people with you,” another speaker said. “Because if you are fighting and your family and friends love you, then they gotta love what you stand for. And if they don’t care for what you stand for, make some new friends.”

One of two prominent attendees was Kenosha alderman Anthony Kennedy. He recalled an incident when he worked at Motorola in the 1990s. A coworker brought up the Bosnian genocide, saying it was horrible, Kennedy said. He replied that he didn’t care.

“I said, ‘What are you talking about?’ She’s like, ‘The humanity! The destruction!’” Kennedy recalled.

The crowd at the event laughed and cheered him on.

Another was James Simmons, a candidate for sheriff.

“I’m here to support the people because it’s our peers that render that burden. You know what I mean?” he said.

If every protestor at the meeting invited five people, the Sunday protest would include roughly 120 people.

But it remains unclear whether everyone at the meeting will meet this ambitious goal.