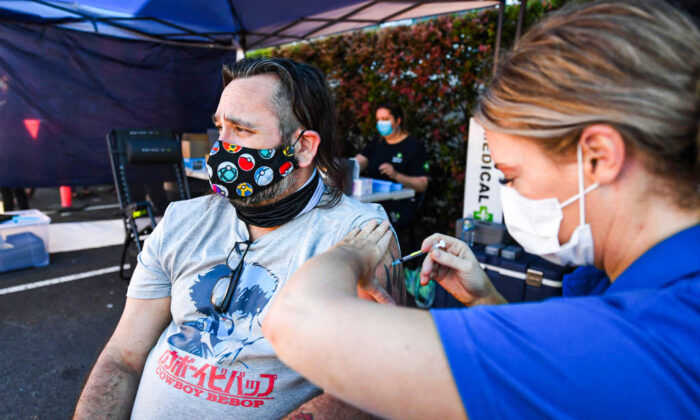 BRISBANE, AUSTRALIA - OCTOBER 16: Shaun Fenwick receives the Covid-19 vaccine outside a Bunnings hardware store on October 16, 2021 in Brisbane, Australia. The Queensland state government is hosting pop-up vaccination clinics at Bunnings stores around the state this weekend to increase access to the COVID-19 vaccine. (Photo by Dan Peled/Getty Images)
Australia

Around 10,000 Australians are planning to file compensation claims for injury or loss of income resulting from COVID-19 vaccines.

The scheme—announced in late August—will cover the costs of injuries A$1,000 or above. But claimants will need to have received a vaccine approved by Australian drug regulators and suffered a recognised “adverse event.”

Individuals need to have been hospitalised for claims between A$5,000 to A$20,000 for at least one night. The minimum claim has since been reduced to A$1,000 after pressure from Queensland Senator Gerard Rennick.

They must also provide medical documentation of the injury and evidence of medical costs and lost wages.

It comes after Australian state and territory governments continue pushing to increase vaccination rates across their populations, with vaccine mandates sweeping through various sectors and industries.

Victoria, Western Australia, and the Northern Territory have implemented some of the most comprehensive mandates affecting millions of Australian workers.

Meanwhile, the Therapeutic Goods Administration has encouraged Australians to provide regular reports on any side effects from an inoculation.

The Claims Scheme was announced in late August by Federal Health Minister Greg Hunt. The program is fully funded by taxpayers and will be backdated to February 2021.

“Side effects, or adverse events, from COVID-19 vaccinations, can occur, but most are mild and last no longer than a couple of days. Serious and life-threatening side effects are very rare, but it is important that we provide a safety net to support those affected,” Hunt said in a press release.

“It also ensures that health professionals administering vaccines will be able to continue with their crucial role in the vaccine roll out with the assurance that the claims scheme will offer them protection.”

“There is a concern in the community that we don’t know the full story, and so I would firstly be advocating for complete openness on the part of the government. At the end of the day, that would lead to better confidence in the vaccines,” he told The Epoch Times.

He also emphasised that individuals should not be denigrated for their views or concerns around receiving the vaccine saying, “We’re in a democracy, and we shouldn’t be doing that.”

“In terms of people being able to make a claim around the associated health impact. Whether the payments are sufficient—I think time will tell—I’m sure that in some cases, it won’t be sufficient.”

The use of no-fault indemnity against lawsuits is commonplace for governments encouraging pharmaceutical companies to manufacture ground-breaking new medicine.

For example, in 2009, the UK government indemnified British multinational GlaxoSmithKline in developing a vaccine against the swine flu pandemic.