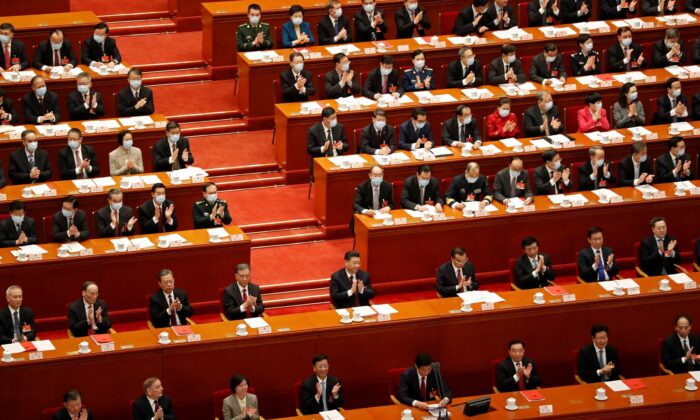 No Alternative to Confrontation With China

In the wake of the sixth plenary session of the 19th Central Committee of the Chinese Communist Party (CCP), leader Xi Jinping has positioned himself to remain in power beyond the norm of two terms. Xi is likely to be the leader of the Chinese regime for many years to come.

Given Xi’s likely continued leadership, it’s important to reflect upon what the U.S. approach to China should be. The Xi–Biden virtual summit only confirmed that there are profound differences between CCP and U.S. interests.

The meeting confirmed that Xi will move ahead with his genocide in Xinjiang, aggression against Taiwan, nuclear expansion, and rise to dominance. And the Biden administration will condemn and proclaim that the United States is in “effective” or “vigorous” competition with China, but it won’t confront the Chinese regime. Xi has no interest in “playing by the rules,” as the regime doesn’t accept the status quo. His interest is to create new rules and have the rest of the world play by them.

Regrettably, this is a pattern for the United States. Since the end of the Cold War, the U.S. strategy toward China has been based on an approach that emphasizes cooperating with China—“bringing China in.” The inference is that China would cooperate with the West to preserve the liberal order of global politics. Not only has this approach failed, but it was a gargantuan mistake that placed the West in its present existential crisis with China. For decades, the Chinese regime has hidden behind the false promise to abide by Western rules and norms to forestall balancing against it, while it has rapidly developed economically, technologically, and militarily.

Given the failure of the approach, there are two broad alternative competitive strategies to combat the CCP’s bid for hegemony. The first such strategy considers the need to confront China’s rise directly and maximally. To address the CCP’s direct challenge to U.S. primacy, Washington needs to respond in the economic, political, and military realms as it did during Cold War confrontations with the Soviet Union.

However, the emerging period of intense security competition with China will differ from the U.S.–Soviet standoff, as there aren’t only significant differences between China and the Soviet Union, but there’s also a different power relationship in relation to China and the United States. The advantage of this approach is that victory is possible, as the United States possesses prodigious advantages, and could maintain its dominant position in international politics by hindering the expansion of China’s power and influence.

The strength and health of institutions are an indication of not only the power of the hegemon, but they’re also a strong indication of the strength of a hegemon in relation to competitors. The ongoing “Chinese hostile takeover” of the international economic order allows Beijing to replace adroitly the principles and values of the present system by altering existing institutions and creating new ones. This is done with the ultimate aim of gradually decapitating the power of Washington’s institutions while achieving the same degree of control over them to advance Beijing’s interests.

In the economic realm, the United States needs to roll back China’s illiberal transformation of the liberal world order. International institutions are a powerful mechanism to assert the dominance of the hegemon, and they’re a tool that the United States can’t afford to lose.

In the political sphere, the United States could usefully draw a stark contrast between Western and Chinese values to the West’s great favor. This would yield an important opportunity for the United States to contrast its values with China’s. Washington must convey to other states that if China does supplant the United States, the rest of the world is going to have to adapt to the CCP’s ideology, as well as the norms and principles that it advances. Those will be the opposite of what the West values and they’ll define radically new and anti-liberal “rules of the road” in international politics.

Fundamentally, Western cultural, economic, and political elites have yet to consider fully what will be lost if China were to become the world’s dominant state and just how different the world would be.

The second alternative strategy would be a modified approach—limited confrontation—due to the difficulties and risks that the United States might face if it were to confront China globally. Washington would minimize global commitments, such as in the Middle East and even to NATO; husband resources; and improve security cooperation with Russia against China. This would be a modified form of primacy—the United States would increase its presence in Asia while reducing commitments elsewhere.

The military and alliance consequences would be significantly different, as they would lead to the end of U.S. extended deterrence commitments and alliances to existing allies in favor of building tight alliance structures in Asia and marshaling conventional and strategic U.S. military power in the region.

That alternative is an inferior strategy. To prevent China’s bid for hegemony, the United States must maximally engage it and defeat it. A change in the Biden administration’s conception of China—from a conditional partner that still might “play by the rules” to strategic enemy—is necessary.

In the wake of profound changes brought by World War II, George Orwell wrote in its immediate aftermath: “To see what is in front of one’s nose needs a constant struggle.” The profound changes in global politics caused by China’s rise have occurred right before us, but a coherent response has been absent thus far.

The China Order that Xi is seeking to create is fundamentally—and vehemently—opposed to the Western conceptions of democratic governance, individual values, and free and open societies. If these are to be preserved and protected, it is incumbent upon the United States to forge and execute a strategic response to China’s hegemonic ambition. As lamentable as the hard fact is, confrontation is necessary to defeat the Chinese regime.