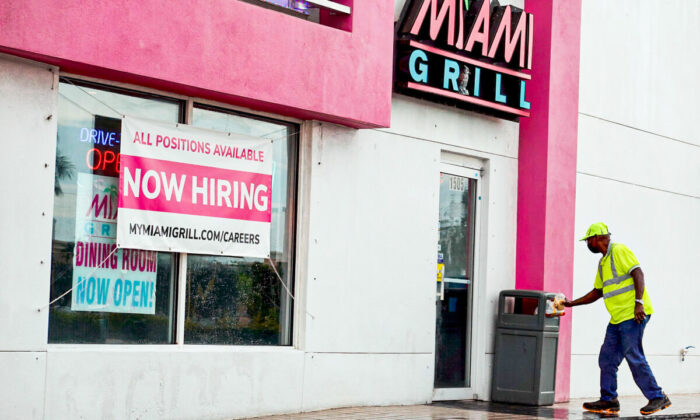 A "Now Hiring" sign near the entrance to a Miami Grill restaurant in Hallandale, Fla., on Sept. 21, 2021. (Photo by Joe Raedle/Getty Images)
Economy

Recent government data on the labor market is providing fresh insight into the so-called Great Resignation, with the figures showing that workers in sectors with a lot of face-to-face interaction with other people, such as in accommodation and food services, were quitting their jobs in September at record or near-record numbers and at over twice the national rate.

The Labor Department’s Job Openings and Labor Turnover Survey (JOLTS), released Nov. 12, showed that a total of 4.4 million U.S. workers quit their jobs in September, a record high. The so-called quits rate, which reflects worker confidence in being able to find a better job, also rose to a record high of 3.0 percent, painting a picture of labor market tightness and growing pricing power of workers.

But the quits rate in several industries—leisure and hospitality (6.4 percent) and accommodation and food services (6.6 percent)—came in at over twice the national rate and at levels at or near their respective record highs.

“The number of job openings in late September remained extraordinarily high at 10.4 million,” Bankrate Senior Economic Analyst Mark Hamrick told The Epoch Times in an emailed statement. “At the same time, the so-called Great Resignation continued to reach new heights, with 4.4 million people quitting their jobs with leisure and hospitality leading the way.”

Of the 4.4 million workers quitting, 863,000 were in accommodation and food services, and 987,000 were in leisure and hospitality.

“This remains an opportune time for people to look for employment, while demand for workers remains high. For many employers, the struggle continues,” Hamrick said.

The recent JOLTS report also highlighted the mismatch between the near-record 10.4 million job openings and the official number of unemployed people in the United States, which the Labor Department said in an earlier report (pdf) amounted to 7.4 million in October.

Treasury Secretary Janet Yellen on Nov. 12 weighed in on the labor market dynamics and commented on the mismatch.

“Spending is strong and the supply of workers is not back up to normal,” Yellen told CBS’ “Face the Nation” in an interview that aired Nov. 14. “We have a tight labor market.”

“Unemployment is low and labor force participation is quite depressed relative to pre-pandemic levels,” she said. “Labor supply is abnormally low, I believe, because of the pandemic.”

“I think part of it reflects concerns about COVID and exposure to COVID, especially in jobs that involve public-facing activities,” Yellen said.

Another reason for what she called an “abnormally low” supply of labor was a shortage of child care workers and educators, which “creates child care problems.”

“That also tends to suppress labor supply,” she said.

In October, the unemployment rate edged down by 0.2 of a percentage point to 4.6 percent. At the same time, U.S. employers added 531,000 jobs in October, the largest gain in three months.