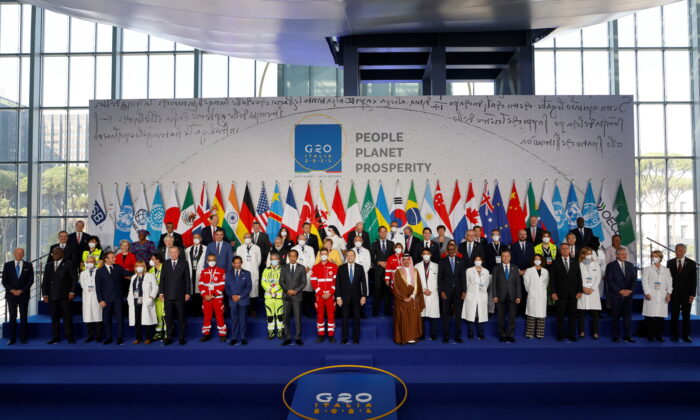 World leaders pose with Italian medical team members for a group photograph on day one of the G20 leaders summit in Rome, Italy, on Oct. 30, 2021. (Ludovic Marin/Pool via Reuters)
Economy

Treasury Secretary Janet Yellen has confirmed that leaders of the world’s 20 biggest economies (G20) have endorsed a “historic agreement” on new international tax rules, including a global minimum corporate tax.

A senior White House official told reporters on Friday that G20 leaders would this weekend formalize their endorsement of a deal establishing a global minimum corporate tax rate of 15 percent.

According to draft conclusions of the two-day G20 summit, held in Rome, Italy, the rules will enter into force in 2023, states the draft joint communique, which is expected to be formally adopted on Sunday, Reuters reported.

President Joe Biden, who traveled to Rome for the summit, wrote on Twitter that G20 leaders “made clear their support for a strong global minimum tax,” calling it “more than just a tax deal—it’s diplomacy reshaping our global economy and delivering for our people.”

The Biden administration pushed the global minimum tax as a way to reduce international tax arbitrage by U.S. multinationals and, in part, to blunt the impact of Biden’s proposed domestic corporate tax hike.

Yellen, who has been a strong advocate of the tax, wrote on Twitter: “Rather than competing on our ability to offer lower rates, America will now compete on the skills of our people, our ideas & our capacity to innovate—which is a race we can win.”

The White House official cited an independent study that found that a 15 percent global minimum tax rate would lead to at least $60 billion in additional revenue per year just in the United States.

“The deal works because it removes the incentives for the offshoring of American jobs, it’s going to help small businesses compete on a level playing field, and it’s going to give us more resources to invest in our people at home,” the White House official said, calling the deal a “game changer for American workers, taxpayers, and businesses.”

“In our judgment, this is more than just a tax deal; it’s a reshaping of the rules of the global economy,” the official added.

The Biden administration’s appeal for international cooperation on the global corporate minimum tax rate is a bid to at least partially counteract any disadvantages that might arise from the president’s proposal to raise the U.S. corporate tax rate, a move panned by Republicans and business groups as hurting the competitiveness of U.S. companies and slowing wage growth.

The deal still faces several hurdles before it can take effect, including the fact that each country must still ratify the tax through an internal legislative process. Also, U.S. approval of related tax legislation proposed by Biden will be key, especially since the United States is home to many of the biggest multinational companies and a rejection by Congress would cast uncertainty over the entire project.