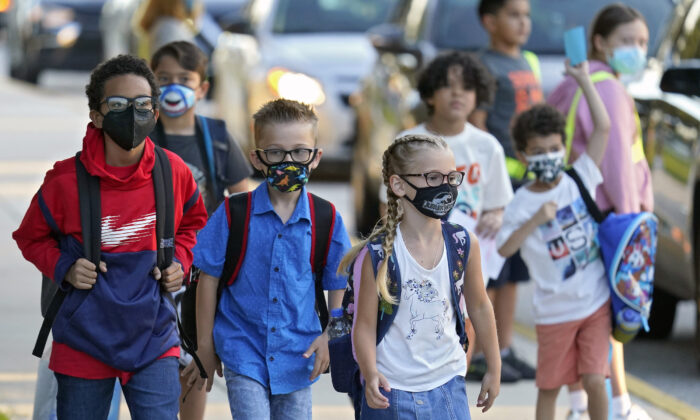 Florida Education Commissioner Richard Corcoran is recommending that the state’s board of education impose stricter financial sanctions on school districts that are acting in violation of state rules about mask requirements.

According to memos posted Tuesday, Corcoran has found at least 10 school districts to be non-compliant with Florida’s mask policies, which give parents the final say on whether their children wear masks at school. Among them are the largest three districts in the state, serving a total of 840,000 students in Miami-Dade, Broward, and Hillsborough counties.

Having disagreements with the state’s mask policies “does not provide a school district with a basis to violate” them by imposing stricter mask rules, Corcoran wrote, adding that school districts that do not allow students to opt-out of mask mandates through parental requests will be facing new punishments.

So far, the state has withheld school board members’ salaries in Alachua and Broward counties. In support of those districts, the Biden administration started a new grant program, allowing district officials to use the grant money to “restore funding withheld by state leaders” related to mask and other COVID-19 restrictions they put in place.

That new punishment will specifically target this Biden administration initiative, Corcoran said in the memo.

The Alachua County Public Schools was the first district to receive funds from the new federal grant known as Project SAFE (Supporting America’s Families and Educators). In late September, the U.S. Department of Education announced that Alachua would be awarded $147,719 to cover the penalties.

“With these grants, we’re making sure schools and communities across the country that are committed to safely returning to in-person learning know that we have their backs,” the U.S. Secretary of Education Miguel Cardona said when announcing the award. “I commend Alachua for protecting its students and educators, and I look forward to working with them to provide students their best year yet.”

Broward County Public Schools in South Florida has also been awarded $420,957 in Project SAFE money. According to the district’s website, the Florida Department of Education has been withholding $35,080 each month from the district’s funding allocation since August. This amount represents 1/12 of all nine Broward school board members’ annual salaries.

The Florida Board of Education will meet and weigh on Corcoran’s recommendations on Oct. 7.