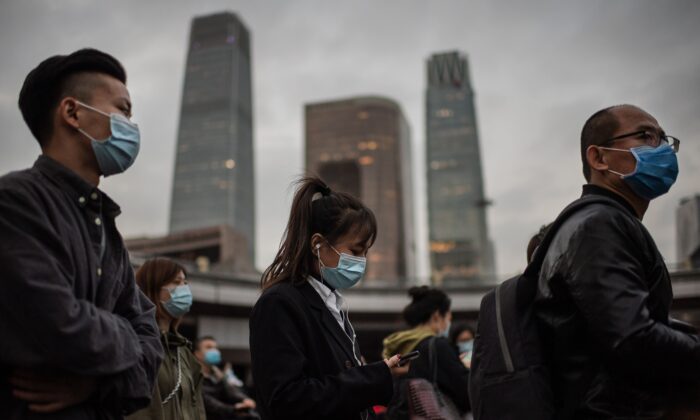 People wearing face masks as a preventive measure against COVID-19 wait at a red light to cross a street during rush hour in Beijing on Oct. 14, 2020. (Nicolas Asfouri/AFP via Getty Images)

Chinese military scientists in 2015 detailed a plot to unleash a bioengineered SARS coronavirus to cause mass terror and advance the communist regime’s global political ambitions.

These newly uncovered revelations come amid intensifying scrutiny over the possibility that the COVID-19 pandemic originated from a laboratory leak in Wuhan, an institute that has collaborated with the Chinese military.

The Chinese military scientists’ theories were detailed in a 2015 book, first reported recently by News Corp’s The Australian. The scientists advocated for the weaponization of pathogens, including SARS coronaviruses, to “cause terror and gain political and strategic advantage” over an enemy state.

The SARS epidemic from 2002 to 2003 infected 2,769 and killed 425 people outside of mainland China, according to data from the World Health Organization (WHO). Experts say the numbers inside China are likely much higher than officially reported.

The 261-page book titled “The Unnatural Origin of SARS and Genetic Weapons Based on Man-Made Viruses,” was published in February 2015 by the Military Medical Science Press, a publishing house owned by the Chinese military, the People’s Liberation Army (PLA).

“The development of bioweapons has entered into an unprecedented new stage in history,” the authors wrote.

The authors went on to implore Chinese experts to “understand and pay attention to contemporary genetic weapons” for any possible future wars, including in the advent of a third world war.

The “contemporary genetic weapons” the authors wrote about refers to using experimental biotechnology and animal testing to modify the genes of pathogens, which could be tailored to target the specific genetic traits of enemy populations.

Deploying such bioweapons would be more advantageous than using conventional warfare and military actions, the authors argued, because military moves can be traced back to the state and result in international condemnation.

Genetic weapons, on the other hand, “can be concealed [in deployment] and it is hard finding evidence against them,” the authors wrote.

“Even in the face of academic, virological, or animal evidence, [one can] deny, prevent [someone from raising the issue], suppress [possible accusations], leaving international organizations and righteous people helpless.”

Xu Dezhong, one of the two editors-in-chief of the book, was an analyst for China’s national SARS prevention and treatment team at that time. His duties also included reporting to China’s top military command, the Chinese Military Commission, according to Baike, a Wikipedia-like platform run by Chinese search engine Baidu.

Xu was also a professor in the department of military epidemiology at China’s Air Force Medical University. The school, formerly known as the Fourth Military Medical University, is located in Xi’an, the capital of central China’s Shaanxi Province. Ten other scientists from this military university were listed among the book’s 18 authors.

The other editor-in-chief was Li Feng, who was deputy chief of the bureau of epidemic prevention at the PLA’s Logistics Department. It is unclear if Li still holds this position.

The book discussed at great length the potential fallout of a bioweapon attack and the optimum conditions to release such a weapon.

Any attack is likely to overwhelm the local health sector around ground zero, the book said. The medical sector would be under “enormous burden” because of the sheer number of patients, it said. In addition, the need to put patients under quarantine, as well as prolonged medical treatment, would further strain medical resources.

A stable flow of wind in one direction is important, the authors said, to carry the airborne pathogens of the bioweapon to the targeted area. Since these pathogens can be weakened under strong sunlight, it is better to release them at “dawn, dusk, night, or cloudy day,” they added.

Further, the authors noted that rainfall and snow are not optimal conditions because this type of weather would “lower the effective concentration” of the airborne pathogens.

The book’s disclosure comes more than a year after the outbreak of the CCP (Chinese Communist Party) virus, commonly known as novel coronavirus, in Wuhan, China. The CCP’s mishandling of the initial outbreak meant the disease spread globally, when it could have been contained, going on to claim more than 3 million lives worldwide.

As the world struggles to find the origins of the pandemic, a growing number of voices are suggesting that the virus leaked from the Wuhan Institute of Virology (WIV), and have demanded the CCP open up the institute for investigation. Beijing has denied these allegations but has not opened the lab’s records to independent scrutiny.

David Asher, former lead COVID-19 investigator at the U.S. State Department, said in March that the virus could be the result of a bioweapon research accident at the WIV.

In January, the State Department released its findings into the WIV, a P4 lab (the highest biosafety level), concluding the institute “has engaged in classified research, including laboratory animal experiments, on behalf of the Chinese military since at least 2017.”

The department said it had reason to believe that “several researchers inside the WIV became sick in autumn 2019, before the first identified case of the outbreak, with symptoms consistent with both COVID-19 and common seasonal illnesses.”

The WIV was also found to have taken part in a state-funded project from 2012 to 2018, studying animal pathogens in wild animals. The project was conducted by a joint team of military and civilian scientists.

However, a March report by a team of Chinese and foreign scientists assembled by the World Health Organization dismissed the lab leak theory as “extremely unlikely.” The report was heavily criticized, with 14 countries, including the United States, Canada, and the United Kingdom, expressing concerns about the findings, while calling for a “transparent and independent analysis and evaluation” into the pandemic origins.

Anders Corr, principal at the New York-based political consultancy firm Corr Analytics, in a recent op-ed for The Epoch Times, said the Chinese military scientists’ textbook should serve as a warning of the potential for a “surprise bio-attack from China.”

“Let’s not wait for a surprise bio-attack. Shut down China’s bioweapons programs now, by defensively decoupling from, and thereby minimizing, the country’s STEM infrastructure,” Corr wrote. STEM is an acronym for science, technology, engineering, and mathematics.

He added: “Add maximum economic and political pressure, to nudge China toward much-needed democratization. Only when the country democratizes should we allow it back into the international system.”

Frank Fang
journalist
Frank Fang is a Taiwan-based journalist. He covers news in China and Taiwan. He holds a Master's degree in materials science from Tsinghua University in Taiwan.
HwaiDer