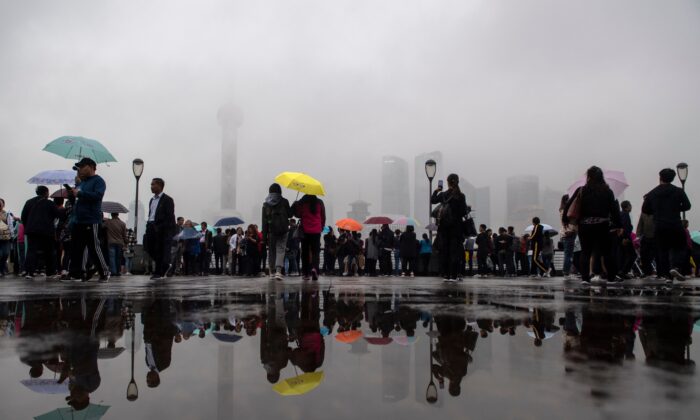 Tourists look at the skyline of Shanghai in the Lujiazui Financial District of Pudong, China, on Oct. 22, 2018. (Johannes Eisele/AFP via Getty Images)
Chinese Regime

After being injected with an unknown substance, forced to take unidentified pills, and badly beaten, an American from San Francisco thought he wasn’t going to make it out alive from China’s secretive black jails.

Warren Rothman said he was taken to four different black jails—ordinary places that are turned into unofficial jails by Chinese officials who often subject detainees to abuses with impunity. At one point during his ordeal, Rothman said he was tied up, had dirt jammed into his mouth, and was kicked and punched.

“I really thought at this point, that was the end of my life right there. I was not accepting it, but I thought that was it. I heard the guards joking about me, how I’m coughing and spitting out this dirt,” Rothman recalled about what was going through his mind at the time.

The harrowing experience happened more than 10 years ago, but Rothman, a U.S. citizen who graduated from Yale University, said his story should be a warning to anyone traveling to China.

“China is really one giant black jail. It is one huge jail,” he said in a recent interview with EpochTV’s “American Thought Leaders.”

“Even a foreigner with a passport and a visa goes in there and may not get out. He really has only a conditional permit to get out.”

Author of “Kafka in China: The People’s Republic of Corruption,” Rothman pointed to recent examples—Canadians Michael Kovrig and Michael Spavor—to explain how China always has “an ulterior reason” for not letting foreigners leave, even though they might not have done anything wrong at all.

The Canadians have been arbitrarily detained in China since December 2018, coinciding with U.S. efforts to extradite Meng Wanzhou, chief financial officer of China’s tech giant Huawei.

According to human rights group Safeguard Defenders, people from many countries—including Australia, Japan, the United States, as well as Kovrig and Spavor—have been victims of the Chinese regime’s “hostage diplomacy.”

Currently, the State Department’s travel advisory on China warns U.S. citizens that when traveling in China, Beijing “arbitrarily enforces local laws” and that they could be detained “without due process of law.” It also said the Chinese regime uses arbitrary detention to “gain bargaining leverage over foreign governments.”

“Communist China is basically a criminal regime. It operates through crime,” Rothman said. “This is not a regime that we can do anything with, except oppose.”

Before becoming a writer, Rothman was a lawyer who had worked for law firms in New York and Europe before starting his own company.

The incarceration took place in 2008, Rothman recalled, when one day after a morning stroll, he returned to his apartment in Shanghai to find the place completely trashed.

Terrified, he began packing a bag while considering his options. But before he could make a decision about what to do next, evening fell and 12 thugs showed up at his door. The next day, a larger group of 15 thugs showed up.

On the third day, his paralegal—a Chinese national he had hired—broke into his apartment followed by four thugs. They dragged him out of the building and threw him into an unmarked white van. He was taken to a place that he called a “four-star black jail” because it was a room in a normal four-star hotel.

Before long, he was taken to another black jail—a space behind a doctor’s office located in a rundown shopping center.

Eventually, he ended up at a facility that had a hospital wing. He was tied to a chair for at least seven hours while also being tortured.

“They’re kicking and punching me, my legs, my back, [and] my arms,” Rothman recalled.

Then, he was dragged to the hospital section of the facility.

He was then tied to a hospital bed and a woman in a nurse’s uniform gave him a shot of an unknown substance. At that time, Rothman thought the shot was a tranquilizer because he was told he would be given another shot later—which he speculated would contain a lethal agent to kill him.

However, the second shot never happened. Rothman said he was instead forced to swallow a handful of pills of an unknown substance.

As he continued to take these unidentified pills, he said he had “endless meetings with the staff” of the hospital, during which they inquired about his thoughts and feelings.

“At the end of 10 days, I was finally allowed to leave. But I had no idea until the day I left that I was actually going to leave,” he said.

It was only in hindsight that Rothman realized what might have led to his harrowing experience.

Months before returning to his trashed apartment, he learned that his paralegal had helped to arrange a $3 million bribe to ensure that his client, an American company, could get a deal in China.

Rothman said he berated his paralegal for at least an hour, telling him it was the “most disgusting thing” he had ever heard.

He later wrote a memoir of his experiences in China including the days he spent in black jails.

“I want to warn people. I want people to read this book and understand the reality of China from the standpoint of someone who’s gone through some of the worst China conditions,” he said.

“[China] is a country that is built not on laws; it’s built on fiat and capricious fiat. Fiat that can come from nowhere. Orders from the [Chinese Communist] Party, basically, is what I’m talking about. That’s what runs the country.”