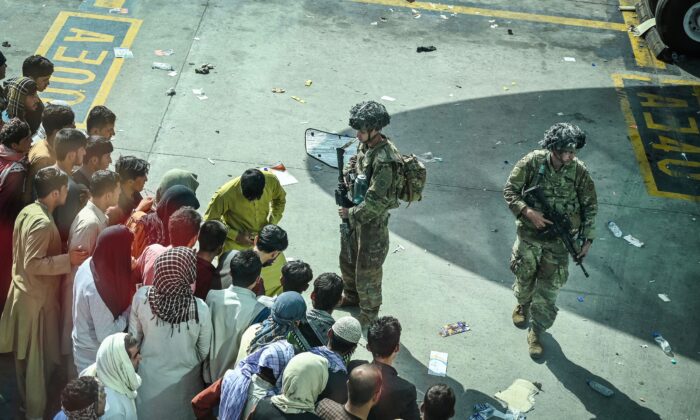 US soldiers stand guard as Afghan people wait at the Kabul airport in Kabul, Afghanistan on Aug. 16, 2021. (Wakil Kohsar/AFP via Getty Images)
International

About 11,000 Americans remain in Afghanistan, the White House said Tuesday.

“There are individuals who will self-identify as American citizens. That number is around 11,000 around the country,” White House press secretary Jen Psaki told reporters in Washington.

“We think there are certainly thousands of Americans. We don’t have an exact count. I would say somewhere, best guess, between five and 10,000 that are near Kabul,” John Kirby, the Pentagon’s press secretary, said on CNN’s “New Day.”

U.S. officials are urging Americans to travel to the Hamid Karzai International Airport, if they’re not there already, to fly out of the country.

Taliban fighters were positioned outside the airport, but the terrorist group “have informed us that they are prepared to provide the safe passage of civilians to the airport, and we intend to hold them to that commitment,” U.S. national security adviser Jake Sullivan said.

Still, U.S. officials couldn’t say whether they were helping American citizens get to the airport, where military flights and limited commercial flights are ferrying a mix of Afghans and Americans to the United States, including Afghans who apply for a Special Immigrant Visa (SIV).

“We are focused on the present mission: to facilitate the safe evacuation of U.S. citizens, SIVs, and Afghans at risk—to get these personnel out of Afghanistan as quickly and as safely as possible,” Joint Staff Director of Regional Operations Maj. Gen. Hank Taylor told reporters in Washington during a separate briefing.

The Pentagon has space at three U.S. bases for up to 22,000 Afghans on the visas, defense officials have said, with the potential to create more spots later.

“If we have to go more higher than that, we’ll certainly do that, because we’re not just talking about the Special Immigrant Visa applicants themselves, but also their families,” Kirby said. “Bottom line is we have an obligation to these people who helped us over the last 20 years, and we here at the Pentagon take that obligation seriously.”

State Department spokesman Ned Price said Monday that Americans should shelter in place in Afghanistan and not try to get to the airport due to the chaotic situation in the country.

That’s no longer the case, according to Kirby.

“Now that security is better, they don’t need to necessarily shelter in place, and they can begin movement to the airport for processing for flights out,” he said.

The Taliban took over Afghanistan on Sunday, entering the presidential palace in Kabul and prompting the country’s president to flee to another country.

The United States abandoned a number of installations in recent weeks, including Joint Base Bagram. Military aircraft were seen evacuating personnel from the U.S. Embassy in Kabul as the Taliban took over parts of the city on Sunday.

The military’s focus has since turned to keeping the airport secure and managing the chaos that erupted as scores of Afghans tried to get on flights.

At least eight Afghans were killed at the airport Monday as they tried climbing onto planes. And two armed persons were shot dead by U.S. troops.

Pentagon officials say there is no indication the Taliban has attacked the airport, or Americans elsewhere.

Evacuation flights restarted on Tuesday after the airport runway was cleared.

Roughly 1,400 to 1,500 people have been evacuated between Aug. 14 and Aug. 17, U.S. military officials said. The evacuations are ramping up, and officials hope to evacuate up to 9,000 people per day, with approximately one aircraft leaving per hour.

More than 4,000 American troops were expected to be on the ground in Kabul by the end of Tuesday, an increase of approximately 1,500 from the day before. They’re being supported by 500 to 600 Afghan military personnel at the airport.

The goal is to complete the evacuations by Aug. 31. U.S. officials will not say whether they’ll keep troops in Kabul past that date if needed. A spokesperson for the Taliban said on Sky News that all American troops must leave the country by Sept. 11.

“Get your troops out of Afghanistan. They have already violated the timeframe that was enshrined in the Doha agreement,” he said.

“We are committed not to attack them and we have not attacked them,” he added.