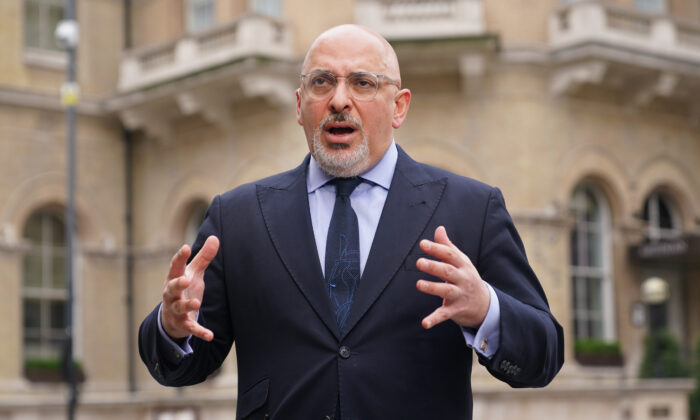 12- to 15-Year-Olds May Override Parents’ Decision on Vaccine: UK Minister

If the UK government proceeds to give the Pfizer-BioNTech COVID-19 vaccine to all 12- to 15-year-olds, the young teens may be able to give consent even if their parents say no, a minister said on Sunday.

The Pfizer-BioNTech COVID-19 vaccine was approved in June for use on children over 12 years old by the Medicines and Healthcare products Regulatory Agency (MHRA).

The Moderna vaccine was approved for children over 12 years old last month by the MHRA, but it has not yet been given to children in the UK’s vaccination programmes.

Ministers are yet to decide on whether or not to offer the vaccine to 12- to 15-year-olds, pending advice from the four nations’ chief medical officers.

The government’s independent advisory body on vaccination and immunisation has advised against offering the vaccine to healthy 12- to 15-year-olds on health grounds, but the chief medical officers are tasked with consulting other experts and “consider the matter from a broader perspective.”

Vaccines minister Nadhim Zahawi told Sky News on Sunday that he could “give that assurance, absolutely” that parents’ consent will be sought if the government pressed on with its vaccination plan.

But in a separate interview, Zahawi suggested the parents’ decision could be overridden.

“The NHS is really well practised in this because they’ve been doing school immunisation programmes for a very long time,” the minister told Times Radio when asked what would happen if a child doesn’t want the vaccine despite parents’ consent or the other way around.

“So what you essentially do is make sure that the clinicians discuss this with the parents, with the teenager, and if they are then deemed to be able to make a decision that is competent then that decision will go in the favour of what the teenager decides to do.”

Zahawi did a number of interviews on Sunday morning on COVID-19 vaccine-related issues. Asked about his own opinion on vaccinating healthy teens, the minister said if the recommendation from the chief medical officers is to vaccinate, then it “absolutely” is the right thing to do, but he told the BBC’s “The Andrew Marr Show” he did not want to “predetermine” that.

The Joint Committee on Vaccination and Immunisation (JCVI) advised against offering the vaccine to healthy 12- to 15-year-olds on Friday, saying the benefits are “marginally greater than the potential known harms” but there is “considerable uncertainty regarding the magnitude of the potential harms.”

“The margin of benefit, based primarily on a health perspective, is considered too small to support advice on a universal programme of vaccination of otherwise healthy 12 to 15-year-old children at this time. As longer-term data on potential adverse reactions accrue, greater certainty may allow for a reconsideration of the benefits and harms. Such data may not be available for several months,” the JCVI said in a statement.

It also added that, unlike this age group, the 16- to 17-year-olds were advised to get one dose of the vaccine because they can give informed consent.

The Epoch Times reached out to NHS England, which declined to comment before the government makes its decision on mass vaccination of 12- to 15-year-olds.

Correction: A previous version of this article incorrectly stated the number of COVID-19 vaccines approved for children over 12 years old. The Epoch Times regrets the error.