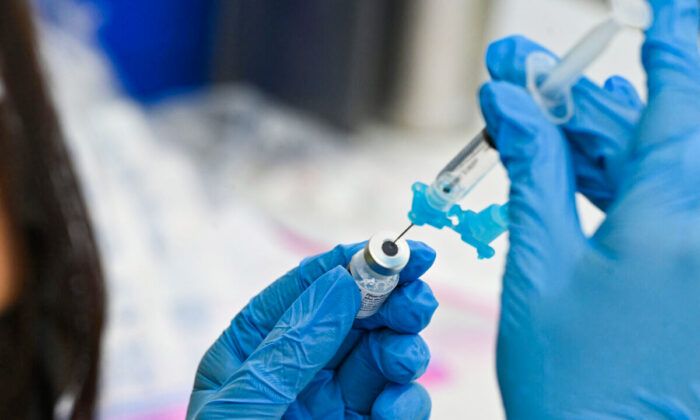 A young boy died after getting Pfizer’s COVID-19 vaccine and evidence was found of the boy suffering from heart inflammation, Centers for Disease Control and Prevention (CDC) researchers revealed on May 19.

The male child experienced fever 12 days after getting the dose, which was his first. A day later, he experienced abdominal pain and vomiting. He died that day.

“This patient had a rapid clinical course. From the time they started experiencing their abdominal pain day 13 after dose one until the time they were brought into the [emergency department] and subsequently died was on the order of a couple of hours,” Dr. Tom Shimabukuro, a CDC vaccine analyst, said during a virtual meeting.

“Histopathological evidence of myocarditis was present on autopsy, and that was resolved to be the cause of death,” he added.

Two teenage boys were previously determined to have died shortly after getting the Pfizer vaccine.

The date and location of the newly reported death was not clear, besides happening between the fall of 2021 and April 24, 2022. The boy who died was between 5 and 11 years old.

The death was reported to the Vaccine Adverse Event Reporting System (VAERS), which is co-run by the CDC, and verified by the CDC through an interview with the healthcare provider who worked on the case and/or a review of the medical records.

Testing on the boy, which included testing by the CDC’s infectious disease pathology branch, “did not find evidence of viral infection at the time of death,” Shimabukuro said. The CDC is continuing to review the case.

Shimabukuro was presenting during a meeting of the Advisory Committee on Immunization Practices, a panel that advises the CDC on vaccines.

Panelists later recommended all children aged 5 to 11 get a booster dose of Pfizer’s vaccine, and the CDC quickly accepted the recommendation.

None of the panelists inquired about the death.

Some studies indicate that some children, particularly males, are at higher risk of heart inflammation from COVID-19 vaccination than from COVID-19 itself, including a paper published in February.

CDC researchers in a study published by the agency’s quasi-journal in April concluded the opposite.

“We show that for all age groups and all sexes that your risk of getting cardiac complications is certainly higher with getting COVID-19 infection as opposed to when you get vaccination,” Dr. Matthew Oster, one of the researchers, told panelists.

“That’s an important point for the general public to recognize and to sort of re-emphasize, that your risk of these complications are higher with the disease than with the vaccination,” Dr. Jamie Loehr, owner of Cayuga Family Medicine and one of the panel members, responded.

Shimabukuro also said the CDC has verified 19 other post-vaccination reports of myocarditis, with 16 of those patients requiring hospital care. Of them, 14 had recovered by the time symptoms were reported to VAERS.

The CDC alleged that the benefits of a booster dose of Pfizer’s vaccine outweighed the risks of the shot, pointing primarily to the vaccine’s protection against severe disease. That led to the advisers recommending the booster.

Both the protection against infection—which turns negative over time—and severe illness wanes over time for Pfizer’s primary series, and studies indicate the same for booster shots.