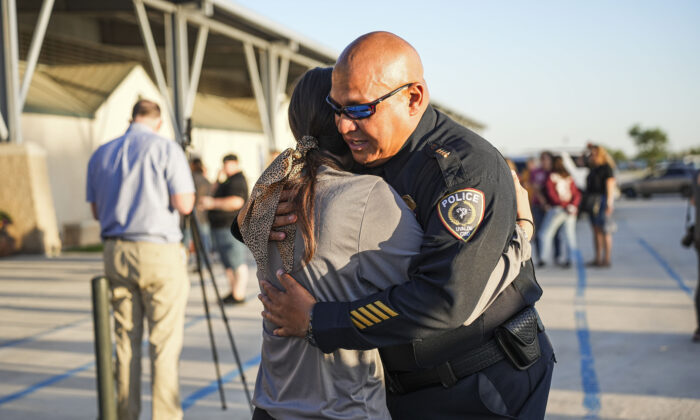 Uvalde school district Chief of Police Pete Arredondo hugs a school student at a community prayer evening held the day after a mass shooting at Robb Elementary School that killed 19 children and two teachers, in Uvalde, Texas, on May 25, 2022. (Charlotte Cuthbertson/The Epoch Times)
By Katabella Roberts

Police Chief Pete Arredondo, who has faced criticism over his response to the shooting massacre at Robb Elementary School in Uvalde, Texas, has defended his actions in his first public interview.

Speaking to The Texas Tribune, Arredondo said that a missing key to a locked classroom door was ultimately to blame for law enforcement taking 77 minutes to take down gunman Salvador Ramos on May 24.

“The only thing that was important to me at this time was to save as many teachers and children as possible,” Arredondo said.

During the interview, Arredondo, 50, said he took what he believed to be the best steps to protect lives on the day of the massacre, explaining: “My mind was to get there as fast as possible, eliminate any threats, and protect the students and staff.”

The police chief pointed out that roughly 500 students attending the school were able to be evacuated safely during the incident.

Arredondo’s comments come as he is facing growing public criticism and scrutiny over his response to the events at Robb Elementary, in which 18-year-old Ramos killed 19 children and two teachers.

The school district police chief has been keeping a low profile since the shooting and failed to appear at a city council meeting in Uvalde on Tuesday, despite being sworn in on May 31.

Meanwhile, the head of the state police has said Arredondo made the “wrong decision, period” when he decided not to immediately breach the classroom that the shooter had entered, and instead ordered officers to hold and wait for backup.

Arredondo insisted that was not the case.

“Not a single responding officer ever hesitated, even for a moment, to put themselves at risk to save the children,” Arredondo said. “We responded to the information that we had and had to adjust to whatever we faced. Our objective was to save as many lives as we could, and the extraction of the students from the classrooms by all that were involved saved over 500 of our Uvalde students and teachers before we gained access to the shooter and eliminated the threat.”

Arredondo said the door to the classroom door was “reinforced with a hefty steel jamb,” and “designed to keep an attacker on the outside from forcing their way in.” Given that the gunman was inside the classroom, this prevented officers from kicking in the door and confronting the shooter, he explained.

The police chief said he “believed the situation had changed from that of an active shooter, to a gunman who had barricaded himself in a classroom with potential other victims,” according to the Texas Tribune.

He spent more than an hour in the hallway, and in the first 40 minutes, called for tactical gear, a sniper, and keys to get inside, choosing to hold back from the doors for fear of provoking Ramos to shoot more. Arredondo also attempted to talk to the gunman but received no response, he said.

Eventually, dozens of keys finally arrived, but none of them would work in opening the door.

“Each time I tried a key I was just praying,” he said.

While other officers outside the school evacuated children, Arredondo said he and the officers in the hallway stayed in position and waited for tools to arrive so that they could get into the classroom and confront the gunman.

“It’s not that someone said stand down,” Arredondo’s lawyer, George E. Hyde, told the Tribune. “It was ‘Right now, we can’t get in until we get the tools. So we’re going to do what we can do to save lives.’ And what was that? It was to evacuate the students and the parents and the teachers out of the rooms.”

One hour and 17 minutes after Ramos launched his massacre, police were finally able to enter the classroom and fatally shoot him.

During the interview, Arredondo also explained his decision not to take his police radio into the school with him, which experts believe may have contributed to the chaoticness of the situation on May 24, and which meant he was unaware that students were calling 911 from inside the two classrooms and begging police to stop him.

The police chief said he wasted no time running into the school without the radios because he believed carrying them would slow him down, describing how one “had a whiplike antenna that would hit him as he ran” and another “had a clip” that he “knew would cause it to fall off his tactical belt during a long run.”

He also was not wearing body armor, according to the paper.

His lawyer also said Arredondo did not issue any orders to other law enforcement agencies and did not consider himself the incident commander on that day.

“Once he became engaged, intimately involved on the front line of this case, he is one of those that is in the best position to continue to resolve the incident at that time,” Hyde said. “So while it’s easy to identify him as the incident commander because of that NIMS process, in practicality, you see here he was not in the capacity to be able to run this entire organization.”

Meanwhile, The New York Times reported that a group of U.S. Border Patrol agents responding to the incident ignored an order spoken into their earpieces not to enter the classroom.

Arredondo said he had not spoken out before because he “didn’t want to compound the community’s grief or cast blame at others.”

The Epoch Times has contacted the Texas Department of Public Safety for comment.