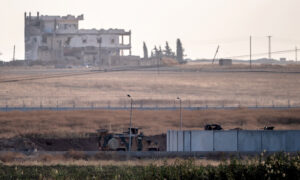 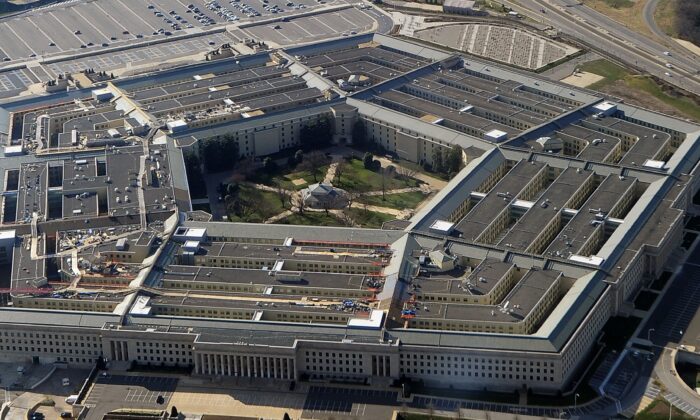 The Pentagon building is seen in Washington in a file photograph. (AFP via Getty Images)
Executive Branch

US Launches Retaliatory Airstrikes on Iran-Backed Militias in Syria

The United States on Thursday launched airstrikes in eastern Syria, targeting sites connected to Shia militias groups backed by the Iranian regime believed to be involved in recent attacks against U.S. targets in Iraq.

The retaliatory strikes marked President Joe Biden’s first overt use of military force.

“These strikes were authorized in response to recent attacks against American and coalition personnel in Iraq, and to ongoing threats to those personnel,” Pentagon spokesman John Kirby said in a statement.

A rocket attack on an airport near the city of Erbil on Feb. 15 in Iraq’s semi-autonomous Kurdish-run region killed a civilian contractor with the American-led military coalition, and injured six others, including four American contractors and a U.S. service member.

Biden administration officials condemned that attack, but as recently as this week officials indicated they had not determined for certain who carried it out. Officials have noted that in the past, Iranian-backed Shiite militia groups have been responsible for numerous rocket attacks that targeted U.S. personnel or facilities in Iraq.

Kirby said Tuesday that Iraq is in charge of investigating the Feb. 15 attack.

Earlier, on Jan. 8, the United States treated 11 of its troops for symptoms of concussion after an Iranian missile attack that hit Al Asad airbase in Iraq where U.S. forces were stationed. It appeared to be action by Iran in response to the Jan. 3 killing of Iran’s top military general Qassem Soleimani in Baghdad last year, via a U.S. drone strike that was ordered by former President Donald Trump. Soleimani had approved the attacks on the U.S. Embassy in Baghdad earlier that week, and was “actively developing plans to attack American diplomats and service members in Iraq and throughout the region,” according to the U.S. State Department.

Kirby said that the U.S. strikes on Thursday destroyed multiple facilities located at a border control point used by a number of Iranian-backed Khomeinist militia groups, including the Kait’ib Hezbollah and Kait’ib Sayyid al-Shuhada. Members of Kait’ib Hezbollah were among those who attacked the U.S. Embassy in Baghdad last year.

“President Biden will act to protect American and Coalition personnel. At the same time, we have acted in a deliberate manner that aims to de-escalate the overall situation in both eastern Syria and Iraq,” Kirby added.

It wasn’t immediately clear if the U.S. strikes caused any casualties. No further details were immediately available.

“I’m confident in the target that we went after, we know what we hit,” Defense Secretary Lloyd Austin told reporters late Thursday.

“We’re confident that that target was being used by the same Shia militants that conducted the strikes,” he added, referring to the Feb. 15 attack.

Austin noted that he recommended Biden authorize the airstrike.

The Biden administration had been “deliberate” in its approach, Austin said.

“We allowed and encouraged the Iraqis to investigate and develop intelligence, and it was very helpful to us in refining the target,” he added.

Biden authorized the airstrikes one day after speaking with Iraqi Prime Minister Mustafa Al-Kadhimi. They “discussed the recent rocket attacks against Iraqi and coalition personnel and agreed that those responsible for such attacks must be held fully to account,” according to a statement from the White House.