US Launches Retaliatory Strike on Iran-Backed Group After Deadly Attack 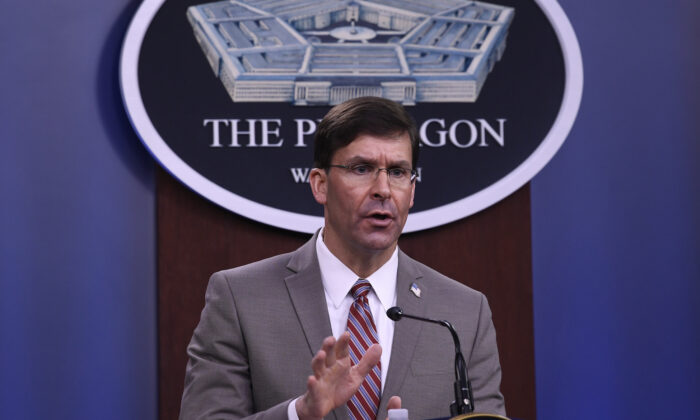 Defense Secretary Mark Esper speaks during a briefing at the Pentagon in Washington on March 2, 2020. (Susan Walsh/AP Photo)
By Mimi Nguyen Ly

The United States on Thursday launched retaliatory airstrikes aimed at an Iran-backed terror group after a recent deadly rocket attack on a U.S. military base in Iraq that killed two Americans and a Brit.

The Pentagon said in its statement that the strikes were “defensive, proportional, and in direct response to the threat posed by Iranian-backed Shia militia groups (SMG) who continue to attack bases hosting OIR coalition forces,” and that the SMGs “must cease their attacks on U.S. and coalition forces or face consequences at a time and place of our choosing.”

“The U.S. and the coalition remain committed to the lasting defeat of ISIS, and the long-term security, stability, and sovereignty of Iraq,” the statement from Pentagon read.

Marine Gen. Frank McKenzie, the top U.S. commander for the Middle East, will give more information regarding the strikes at 8:30 a.m. in the Pentagon Briefing Room on Friday.

The attack on March 10 involved about 18 rockets fired at Camp Taji and killed two American troops and a 26-year-old British soldier, and wounded 14 others.

The U.S. military said that the 107 mm Katyusha rockets were fired from a truck launcher that was found by Iraqi security forces near the base after the attack.

“You don’t get to shoot at our bases and kill and wound Americans and get away with it,” Esper told reporters at the Pentagon earlier.

When asked at the time if any counterattack could include a strike inside Iran, Esper said, “We are focused on the group that we believe perpetrated this in Iraq.”

Army Gen. Mark Milley, chairman of the Joint Chiefs of Staff, told Pentagon reporters that the United States knows ”with a high degree of certainty” who launched the attack.

Milley said there are no systems on the base capable of defending against that type of attack when he was asked why none of the rockets was intercepted. Milley also said that the 14 injured include U.S. and allied troops as well as contractors. They will be monitored for possible traumatic brain injury, he added.

In apparent anger at the U.S. airstrike on KH, thousands of protesters and members of multiple Iran-backed groups stormed the U.S. embassy in Baghdad on Dec. 31. The protesters included members of KH.

On Jan. 3, a U.S. airstrike killed Qassem Soleimani, Iran’s most powerful military officer, and Abu Mahdi al-Muhandis, a leader of the Iran-backed militias in Iraq, of which KH is a member.

Iran, in apparent response to Soleimani’s death, launched a ballistic missile attack on Jan. 8 at al-Asad airbase in Iraq. The attack caused more than 100 U.S. troops to suffer from traumatic brain injuries.

McKenzie told the Senate Armed Services Committee on Thursday morning that the killing of Soleimani and the increase in U.S. troops and assets in the region has made clear to Iran that the U.S. will defend its interests there, reported The Associated Press.

“What has not been changed is their continuing desire to operate through their proxies indirectly again us,” he said. “That is a far more difficult area to deter.”

He said that the most recent attack at Camp Taji created a “red line” for the United States, adding that he didn’t think Iran has “a good understanding of where our red line is.”