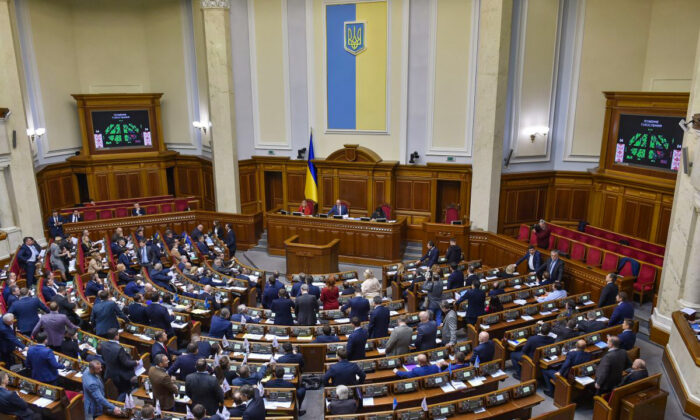 Ukrainian members of Parliament of the Verkhovna Rada, the Supreme Council of Ukraine, on Dec. 6, 2018, (Genya Savilova/AFP/Getty Images)
Russia-Ukraine War

Russian music is set to be banned from being broadcast in Ukrainian media and on public transport after the country’s Parliament voted Sunday in favor of a new bill aimed at reducing Russia’s influence.

Members of Ukraine’s Parliament, also known as the Verkhovna Rada of Ukraine, also voted on Sunday in favor of a bill that would place severe restrictions on Russian books.

Parliament confirmed the bills had been passed in a Twitter post on Sunday, with the constitutional majority of the Rada voting “for” with 306 votes.

Under the first bill, music by post-1991 Russian citizens will be banned from being played in media and on public transport. The quotas on Ukrainian-language speech and music content in TV and radio broadcasts will also be increased.

It will also ban the commercial import of books printed in Russia, Belarus, and occupied Ukrainian territory. Books in Russian imported from any other country will require special permission.

Both bills now head to Ukrainian President Volodymyr Zelenskyy’s desk where he is widely expected to sign them into law.

Ukraine’s culture minister, Oleksandr Tkachenko, said on Telegram on Sunday that he was “glad to welcome” the new restrictions on music and books.

“Unfortunately, the war proved that it was high time to switch to Ukrainian-language content. And this must be enshrined in law,” Tkachenko wrote. “The laws are designed to help Ukrainian authors share quality content with the widest possible audience, which after the Russian invasion do not accept any Russian creative product on a physical level.”

“Thank you to everyone who supported such decisions. We must replace Russian content with Ukrainian at all levels, from music to libraries,” Tkachenko added.

Ukraine has enacted a number of measures aimed at so-called “derussification” both prior to and since Russia’s Feb. 24 invasion, such as making Ukrainian the mandatory language used in daily life in public sectors.

However, Moscow officials said that law would create further divisions in the country and oppress Ukraine’s large number of Russian speakers.

The latest bills come shortly after the European Commission, the executive arm of the European Union, said it supports Ukraine being granted EU candidate status in the wake of Moscow’s invasion.

“The Commission recommends that Ukraine be given the perspective to become a member of the European Union. It should be granted candidate status on the understanding that steps are taken in a number of areas,” the commission wrote in an opinion.