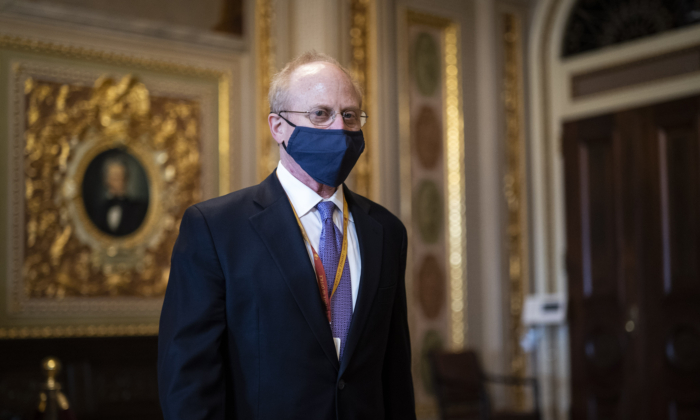 An attorney who represented President Donald Trump during the recent impeachment trial says a law school canceled a civil rights law course he was going to teach and he was suspended from a civil rights lawyer email discussion list.

“I was hoping to teach a civil rights course at a law school in the fall. We’ve been in talks about it, kind of planning it out. I wrote to them and I said, ‘I want you to know, I’m gonna be representing Donald Trump in the impeachment case. I don’t know if that impacts on your decision at all,’” David Schoen, one of the three attorneys who argued before the Senate, told The Epoch Times.

“And they said, you know, they appreciated my writing and, frankly, it would make some students and faculty uncomfortable, so I couldn’t do it.

“That was sad for me because I really want to go more and more into teaching. I like doing that,” Schoen said.

“They actually spent 48 hours discussing this with their board and so on. And they decided that they needed to suspend me from the list,” Schoen said. “It’s a very important one to me. It’s very prominent civil rights lawyers and fine people.”

Schoen delivered an impassioned argument on the first day of the trial for why the Senate didn’t have jurisdiction to try a former president. At the conclusion of his remarks, he appeared to be choking back tears as he read an 1849 poem by Henry Wadsworth Longfellow titled “The Building of the Ship.” Schoen told The Epoch Times that he chose the poem—and the quote from President Abraham Lincoln that preceded it—because he views the days of Lincoln as the closest parallel to the current division in the United States.

“I think we’re in a very perilous, divided time. The election itself showed that, but I think all of the rhetoric shows it also,” Schoen said.

Schoen brought his children, aged 15 to 25, into the process of preparing his impeachment trial remarks. His daughter was the one to suggest using Longfellow’s poem.

“I wrote my remarks myself. I wanted to share them with the kids and I wanted their feedback. They were very helpful to me. One of my sons was with me at the impeachment trial,” Schoen said.

Schoen isn’t the only attorney facing repercussions for defending the president.

Attorney Michael van der Veen said vandals broke the windows in his home and defaced the house with graffiti. Van der Veen has had to move his children to a secret location and hire armed guards to protect his home and workplace.

“When I lived in Alabama, I lived behind an electric fence with two German shepherds and I had to carry a gun every place I went. I faced many threats for different kinds of reasons, over the years. But if you let that stop you, I suppose you’re in the wrong business,” Schoen said.

Schoen received the Pro Bono Publico Award from the American Bar Association (ABA) in 1995 for his civil rights work. The ABA handbook says (pdf) he was “recognized for his enormous contribution to bringing about change in schools, prisons, jails, foster care, police departments, and election ballot access in the South.”

The Senate acquitted Trump of the charge that he incited the mob that breached the Capitol on Jan. 6. Schoen said he spoke to the president after the acquittal. He said the president was “very upbeat, very gratified.”

During the trial, Schoen spoke to Trump two or three times per day. He said the president was always “very gracious,” “very supportive,” and “very much appreciated the presentations I made.”

Days after the acquittal, a top House Democrat and the National Association for the Advancement of Colored People (NAACP) sued Trump over the Capitol breach, accusing the president of planning a conspiracy to attack the Capitol. Schoen said the lawsuit is “political theater.”

“I don’t think there’s any merit to it. I think it’s an abuse of the statute that it’s based on. And I think it’s just going to lead to further divisiveness,” he said.