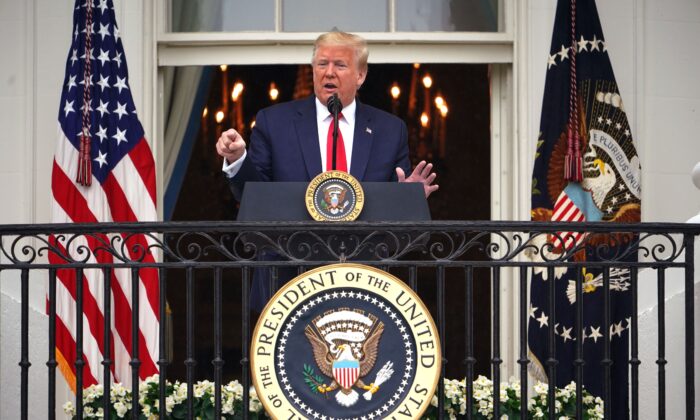 President Donald Trump speaks during the "Rolling to Remember Ceremony: Honoring Our Nations Veterans and POW/MIA" from the Truman Balcony at the White House in Washington, on May 22, 2020. (Mandel Ngan/AFP via Getty Images)
Trump Administration

President Donald Trump on Friday said governors across the nation should let churches and other houses of worship reopen this weekend if they haven’t already done so.

“I call upon governors to allow our churches and places of worship to open right now,” Trump told reporters at the White House in Washington.

“The governors need to do the right thing and allow these very important, essential places of faith to open right now. For this weekend. If they do not do it, I will override the governors. In America we need more prayer, not less,” he said.

The Centers for Disease Control and Prevention issued guidance later Friday for communities of faith at Trump’s direction, which include recommending face coverings, frequent washing of hands, and intensified cleaning, disinfection, and ventilation.

“It’s not right” that some governors have declared liquor stores and abortion clinics as essential but have left out churches and other houses of worship, according to the president, who described the situation as an “injustice.”

Many of the governors who have allowed in-person church services to resume have kept a limit on the number of people allowed to gather. Others continue to bar in-person services.

In some states, drive-in services are held to comply with harsh restrictions implemented in an attempt to slow the spread of the CCP (Chinese Communist Party) virus.

Pastors and congregants filed lawsuits to challenge orders in multiple states after governors put stricter conditions on houses of worship than other places. Some have been successful. A federal judge on Tuesday gave churchgoers in North Carolina the go-ahead to resume indoor services with no limit after Democratic Gov. Roy Cooper tried limiting indoor gatherings to 10 or fewer people, while letting most businesses fill to 50 percent occupancy.

“This court does not doubt that the Governor is acting in good faith to lessen the spread of COVID-19 and to protect North Carolinians. But restrictions inexplicably applied to one group and exempted from another do little to further these goals and do much to burden religious freedom,” U.S. District Court Judge James Dever III wrote in his ruling for a temporary restraining order.

A suit filed by churches and individuals in Oregon led to a county judge declaring Democratic Gov. Kate Brown’s order “null and void,” but that ruling was swiftly blocked by the state Supreme Court.

California’s restrictions on churches drew attention from the Department of Justice, which warned Gov. Gavin Newsom that his orders may discriminate against religious communities

Pastors in a number of states have been fined for reopening in defiance of restrictions.

People want to gather at churches, synagogues, and mosques, Trump said at the press conference on May 22.

“These are places that hold our society together and keep our people united. The people are demanding to go to church and synagogues, go to their mosque,” he said.

Trump expressed confidence that pastors and other faith leaders will make sure their congregations are safe as they gather.

Democratic Rhode Island Gov. Gina Raimondo said at a press conference that she’s keeping plans in place that will continue barring houses of worship from holding in-person services this weekend.

The plans call for allowing in-person services on May 30. Occupancy will be limited to no more than 25 percent.

A spokeswoman for Washington Gov. Jay Inslee, a Democrat, said in a statement: “While we have read the president’s comments, there is no order and we think he understands at this point that he can’t dictate what states can or cannot open.”

Others signaled support for Trump’s recommendation to deem churches as essential.

“I wholeheartedly agree with” the president, Republican Georgia Gov. Brian Kemp said in a statement, adding: “Places of worship – especially during these difficult times – are ESSENTIAL!”