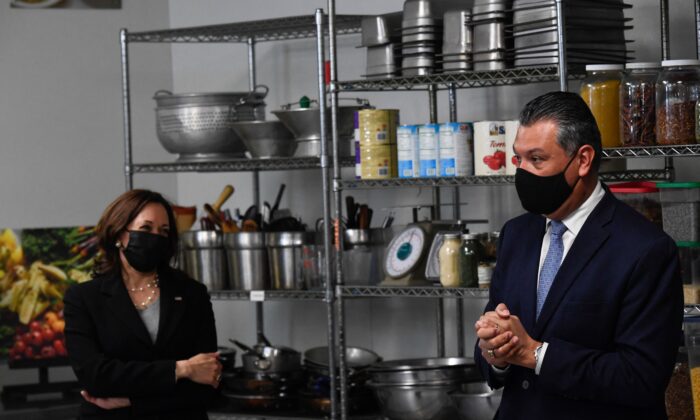 With Vice President Kamala Harris in the “Biden-Harris” administration, California Gov. Gavin Newsom appointed Alex Padilla to replace Harris in the Senate. Both politicians have backstories that people across the nation and around the world should know.

Sen. Alex Padilla (D-Calif.) was a city councilman in Los Angeles from 1999 to 2006, and a state senator from 2006 to 2014. The following year, Padilla became California’s secretary of state, and after the 2016 election, Padilla refused to cooperate with a federal probe of voter fraud, a longstanding practice in California.

As a State Department investigation discovered, falsely documented illegals have been voting in local, state, and federal elections for decades. In 1996, 642 illegals voted for Democrat Loretta Sanchez, who defeated Republican Robert Dornan by fewer than 1,000 votes. In recent years, voter fraud has been surging through the state’s imported electorate.

According to a study by scholars at the Massachusetts Institute of Technology and Yale, more than 22 million people are illegally present in the United States. Pew Research pegged the figure at 11 million, more likely the number illegally present in California alone. For example, when he announced a lawsuit against the Trump administration in 2019, then-California Attorney General Xavier Becerra displayed a sign claiming 10 million “immigrants” in the state.

When illegal aliens get driver’s licenses, the California Department of Motor Vehicles automatically registers them to vote. In 2015, Padilla told the Los Angeles Times, “At the latest, for the 2018 election cycle, I expect millions of new voters on the rolls in the state of California.” True to form, by March 2018, the DMV “motor voter” plan had given licenses to more than 1 million illegals. Padilla wouldn’t say how many illegals voted in 2018, but his previous reference to “millions” provided a ballpark figure. Many more were on the way.

From 2016 to 2018, “caravans” of illegals began showing up at U.S. ports of entry in California, the place on the U.S. border most distant from Central America. Once in California, the acquisition of a driver’s license makes any illegal a registered voter. In March 2020, Gov. Gavin Newsom ordered mail-in ballots for every registered voter in the state. That included the millions of new voters that Padilla celebrated.

As in 2016 and 2018, the secretary of state failed to reveal how many illegals voted, hardly the only issue in need of investigation. California is also a pioneer of ballot harvesting, and that came into play with Kamala Harris, UC–Hastings College of the Law grad. Democrat queenmaker Willie Brown struck up a romantic relationship with Harris, 30 years his junior. Brown set up Harris in a lucrative sinecure and backed her run for district attorney in San Francisco.

In 2010, Harris was so poorly regarded that the Sacramento Bee, a veritable Democrat newsletter, endorsed Republican Steve Cooley, district attorney of Los Angeles County. Cooley held the lead on election night but the same Service Employees International Union (SEIU) drones who ran Harris’s campaign dredged up enough provisional ballots to give Harris a victory of less than 1 percent some three weeks later.

If any Californian thought that was ballot fraud, it would be hard to blame them.

President Barack Obama called Harris “the best-looking attorney general in the country,” but her record was undistinguished, especially on public corruption. When whistleblowers called for a criminal investigation over trouble with the new Bay Bridge, Harris took no action. In 2020, Harris often clashed with Delaware Democrat Joe Biden, particularly on his fondness for segregationists, but Biden wound up giving her the nod.

Newsom appointed Padilla to replace Harris in the Senate. For a man nobody voted for, Padilla proved rather hostile to senators who had, in fact, been elected by the people.

“Donald Trump, and a lot of his enablers, must be held accountable,” Padilla told CalMatters in January. Asked if he would vote to censure or expel Sens. Ted Cruz (R-Texas) and Josh Hawley (R-Mo.) over their Jan. 6 objections to the November presidential elections, Padilla said: “Yes, I think they have to be held accountable. … I think the nation would be best served if they were no longer in the Senate.”

Padilla recently went on record that the Electoral College is America’s “original sin” and “one of those long-lasting things that need to be corrected.”

In his vision, the Electoral College of the Constitution is replaced by an imported electorate. The illegals vote for Democrats and in return get a host of government benefits plus protection from deportation through sanctuary laws. That arrangement is likely what President Joe Biden has in mind when he touts California as a model for the nation.

As Biden said in 2014, illegal immigrants are “already Americans,” so the border is essentially meaningless. The surging caravans are basically drives to bring in more voters. The rule of the Democratic Party replaces the rule of law, and what goes around comes around.

When Harris moved on to the U.S. Senate, she was replaced as attorney general by Becerra, once on Hillary Clinton’s shortlist as a running mate. Becerra is now back in Washington as Health and Human Services boss. Under the Biden-Harris administration, the nation is looking more like California by the day.