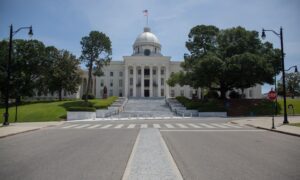 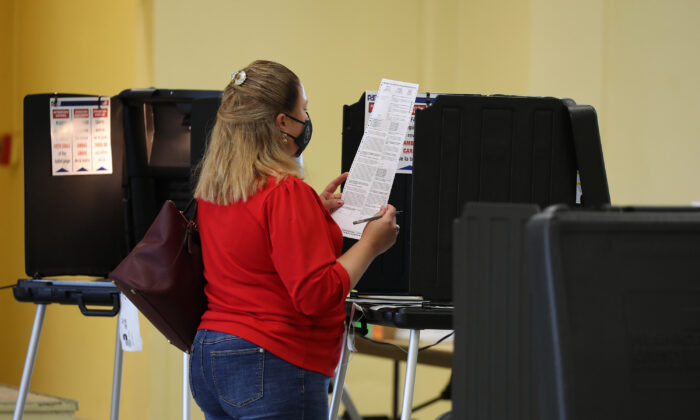 A voter reads her ballot while voting at the Legion Park polling place in Miami on Nov, 3, 2020. (Joe Raedle/Getty Images)
2022 Election

The Era of ‘Zuckbucks’ in Florida Election Administration Ends

The last of the three Florida counties that took grant monies from a left-wing activist group funded by Facebook founder Mark Zuckerberg to help administer the 2020 elections has returned the remaining funds to the group after a new state law banned such grants, according to the Public Interest Legal Foundation.

Zuckerberg and his wife, Priscilla Chan, supporters of President Joe Biden and Democratic Party candidates, grabbed headlines during the last election cycle by giving as much as $400 million to the Chicago-based Center for Technology and Civic Life (CTCL).

CTCL in turn then distributed the money in the form of grants to jurisdictions across the United States purportedly to help those governments hire more staff, buy mail-in ballot processing machinery, and pursue other measures they considered necessary to administer the elections during the ongoing pandemic. Critics complained that CTCL’s grants favored Democrats because they tended to go to the electoral apparatuses in Democratic strongholds and that the funds were part of an attempt to unfairly influence the outcome of the elections.

“The return of this money to the Center for Technology and Civic Life (CTCL) is a victory for election integrity,” said PILF President J. Christian Adams, a former U.S. Justice Department civil rights attorney.

“Zuckbucks were the biggest factor, juicing blue areas in 2020,” Adams said. “A private citizen should not be allowed to influence how our elections are run. At the Public Interest Legal Foundation, we are proud to have played a role in ensuring that this money will not be spent to influence the Florida elections in 2022.”

After the elections last year, Florida banned private money from being used to administer elections in the state.

On May 6, Gov. Ron DeSantis, a Republican, signed the state’s new election integrity law that, in addition to prohibiting the use of private funds to administer elections, also banned ballot harvesting and the mass mailing of ballots, and strengthened voter identification requirements.

“Florida took action this legislative session to increase transparency and strengthen the security of our elections,” DeSantis said at the time. “Floridians can rest assured that our state will remain a leader in ballot integrity. Elections should be free and fair, and these changes will ensure this continues to be the case in the Sunshine State.”

Soon after the law was enacted, two of the counties to receive CTCL grants—Leon and Alachua—returned to CTCL the portion of the grants that were unspent, but Palm Beach County held out until earlier this month.

PILF then sued the county, but the county took the position that there was nothing in the statute that compelled it to return the money, she said.

PILF and the county went back and forth, but the county eventually changed its position after PILF pointed out that the county was benefiting from the remaining grant money because it was accruing bank interest, Bowman said.

Palm Beach County acknowledged in an Aug. 5 email to PILF that was obtained by The Epoch Times that it was returning $612,089.24 to CTCL.

“Elections are meant to be run by tax dollars,” she said. “They’re not supposed to be influenced by billionaires in Silicon Valley.”