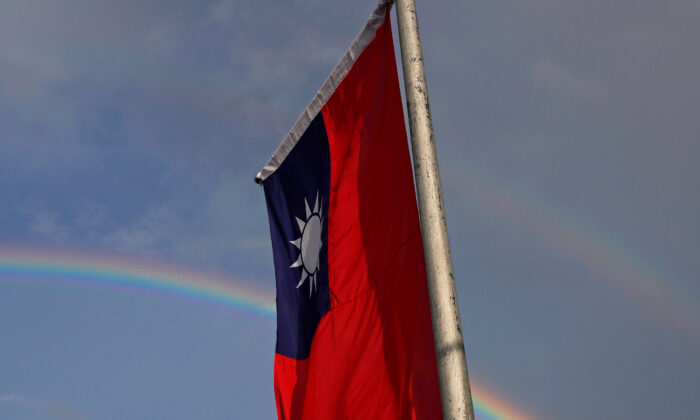 A double rainbow is seen behind a Taiwanese flag during the National Day celebrations in Taipei, Taiwan, on Oct. 10, 2017. (Tyrone Siu/Reuters)
Viewpoints

Taiwan Has a Soul

“Has China lost her soul?”

This is a question asked by Erping Zhang in a recent video, posted as part of the “Tea With Erping” series. I viewed the video with great interest, as this is a question that I have often pondered.

Citing, among other factors, the Chinese Communist Party’s terrible, decade-long Cultural Revolution, its systematic media censorship, and its blanket repression of religious freedom, Zhang states, “In today’s Chinese culture, the divine soul and spiritual traditions are no longer there.” He continues, “The Communist Party has done all it could to disconnect 1.3 billion people from their spiritual and cultural heritage.”

Whenever I think about the question of China’s soul, I inevitably think about this in contrast to the soul of another nation: Taiwan.

Having previously lived in both authoritarian China and democratic Taiwan, I explain to friends that a fundamental difference between Taiwan and China is that, simply stated, Taiwan has a soul.

At its essence, Taiwan is a vibrant nation of 24 million people with bright souls, freedom, and human rights, while China, as Zhang shows, has become a dark place that, after 70 years under the CCP’s dehumanizing rule, is spiritually empty at its core. As Zhang states, “The Party says it aims to serve the people with its materialistic culture, but I fear the opposite is true: that it has been eroding the very foundations of Chinese society. There’s a lack of trust between people and government, and even among people in general.”

Several years ago, while working at a private equity firm in Chicago, I listened to the impressions of a colleague, a Chinese national, who had just returned to the United States from a trip to Taiwan (at that time, the Taiwanese government was allowing Chinese nationals to tour Taiwan). With an intense look and a tone of gravity and enlightenment, the Chinese colleague stated, in reference to Taiwan, “This is the real China.”

I understood that this statement about Taiwan had at least two layers of meaning, one of them complimentary and the other deeply threatening. One layer of the statement meant that Taiwan, also a Mandarin-speaking country, has maintained much of the etiquette, culture, and soul that China has lost under CCP rule. The second layer contained a sentiment that has been hammered, through indoctrination and brainwashing, into the minds of nearly all PRC (People’s Republic of China) nationals from the time that they’re in elementary school: that Taiwan must be taken over by authoritarian China, and by force, if necessary.

China has essentially lost its soul under the CCP, which has made it even more resentful and covetous of Taiwan. The Taiwanese people understand this, and have no interest in becoming part of the PRC, which would mean losing the freedom—including of speech, press, and religion—and human rights that they have cultivated over generations.

But misery loves company, and the CCP will not give up its sick desire to take over Taiwan and bring the Taiwanese people down to their level. With more than one thousand missiles trained on Taiwan, increasing encroachments into Taiwanese airspace by the Chinese air force, and a recent surge in military drills aimed pointedly at invading Taiwan, authoritarian China, with its 1.3 billion subjects, continues to threaten Taiwan’s 24 million people every day with invasion and subjugation. Rather than acknowledging and granting the freedoms and human rights to which Chinese citizens are naturally entitled, the CCP instead focuses on maintaining its iron grip on power, keeping Chinese citizens imprisoned and aiming to pull others into hell in the process.

While studying in Taipei, I came to understand that Taiwan is in many ways a heavenly ideal to which China may aspire, but will never achieve under the CCP’s rule. When I arrived in Taiwan, the Taiwan Tourism Bureau’s slogan was, “Taiwan: Touch Your Heart.” I experienced Taiwan’s heart and soul in my daily interactions with its people.

As a student at National Taiwan University’s International Chinese Language Program, I rented a room in the Taipei apartment of an octogenarian Taiwanese couple, and they told me to call them “ah-po” and “ah-gong,” Taiwanese words for grandmother and grandfather. Every day, when I left for class, my ah-po and ah-gong would call out, “shang ke le,” meaning “you are going to class,” and would pair this traditional acknowledgment with reminders to “duo chuan yi-dian” (wear a coat) if it was cold or “dai yu-san” (bring an umbrella) if it was raining. When I returned from class, they would call out, “hui lai le,” or “you’re back,” and my Taiwanese grandmother would often offer a plate of freshly sliced dragonfruit.

When a storm knocked down some banana trees at their farm in Miaoli County, my Taiwanese grandparents traveled to the farm and brought back to Taipei piles of bananas in various stages of ripeness that they stacked several feet high next to the front door of the apartment. For weeks, every time I left the apartment, they would urge me to take a banana with me. They were born in pre-World-War-II Taiwan, when Taiwan was a colony of Japan, and were part of a generation that, like America’s Greatest Generation, endeavored to let nothing go to waste.

My Taiwanese grandparents’ daughter, son-in-law, and grandson lived in an apartment on the floor above, a very traditional living arrangement in a culture that highly values family togetherness, filial piety, and caring for elderly parents. The daughter, who had learned the traditional Taiwanese art of palm reading, told me while reading my palm that I would return to Taiwan in the future. And while I personally don’t put faith in palm reading, this prediction turned out to be accurate.

I have returned to Taiwan several times to walk the serene, palm-lined campus of National Taiwan University, to look out at the pure blue horizons of the Pacific as I travel across the rugged mountains and unspoiled beaches of Taiwan’s east coast, and to ring in the new year with a spectacular fireworks display at the Taipei 101—Taiwan’s tallest tower—as the clock strikes midnight on Dec. 31. Most of all, I have returned to reconnect with the people and the soul of Taiwan.

The Taiwanese people stand on the front lines of a global struggle between freedom and repression, and their continuing success in this struggle is an important bellwether of hope for the future of the world. They cherish their freedom, their democracy, and their human rights, and nations and citizens around the world should stand with them in defense of these values.

For an overview of Taiwan’s importance to the world—culturally, economically, and geopolitically—a great place to start is the book “Why Taiwan Matters” by professor Shelley Rigger of Davidson College. My one-sentence explanation of why Taiwan matters is this: Taiwan is a free and democratic nation of 24 million people, each of whom matters.

Taiwan has a soul.