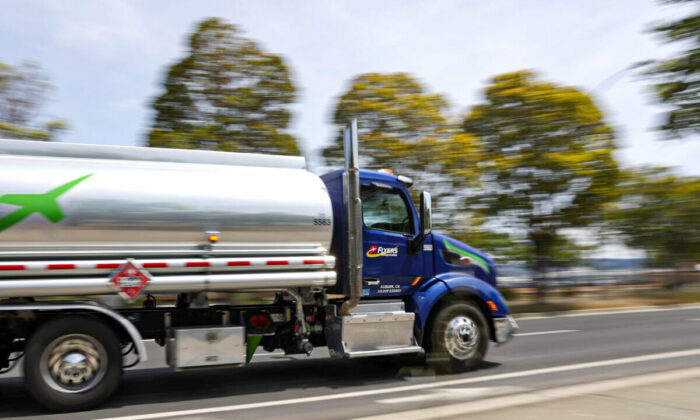 A gasoline truck drives along a road in Richmond, Calif., on May 2, 2022. (Justin Sullivan/Getty Images)
Judiciary

The Supreme Court turned away a challenge to California’s “radical” worker-classification law that virtually outlaws independent contracting, including independent trucking, and clamps down on the so-called gig economy.

The ruling has the effect of ending a temporary stay preventing the enforcement of the law, known as AB5, against motor carriers while the appeal to the Supreme Court was pending. The U.S. Court of Appeals for the 9th Circuit previously denied the challenge to the law, finding the law wasn’t preempted by the Federal Aviation Administration Authorization Act of 1994, which was created to prevent states from undermining federal deregulation of the trucking industry by imposing regulations of their own.

The law is deeply unpopular in California’s struggling business community.

According to JD Supra, a legal publication, the Supreme Court’s refusal to review the case will have “profound consequences for the transportation industry and supply chains in general. At a time when transportation resources and supply chains are already stressed, motor carriers, transportation intermediaries, and commercial shippers must all now adapt to the new landscape in California,” the publication wrote. Motor carriers must “evaluate and adopt alternative operating models to mitigate risk if they intend to continue to do business in California.”

This was the second time in nine months the Supreme Court has refused to hear an appeal challenging AB5. On Oct. 4, 2021, the court decided not to hear an appeal from a ruling by the Court of Appeal of California in a case known as Cal Cartage Transportation Express LLC v. California.

The new decision not to hear California Trucking Association v. Bonta, court file 21-194, came in an unsigned order on June 30 before the high court recessed for the summer. As is their custom, the justices didn’t provide reasons for their decision to reject the case. Rob Bonta, a Democrat, is California’s attorney general.

Bonta’s office said it was “pleased” with the decision, according to Land Line, a trade publication. “At the California Department of Justice, we’ll continue to do our part to defend laws that are designed to protect workers and ensure fair labor and business practices.”

“Gasoline has been poured on the fire that is our ongoing supply chain crisis,” the California Trucking Association, which brought the appeal, said in a statement.

“In addition to the direct impact on California’s 70,000 owner-operators who have seven days to cease long-standing independent businesses, the impact of taking tens of thousands of truck drivers off the road will have devastating repercussions on an already fragile supply chain, increasing costs and worsening runaway inflation.

“We are disappointed the Court does not recognize the irrevocable damage eliminating independent truckers will have on interstate commerce and communities across the state.”

“With AB5 now set to go into effect, thousands of owner-operators driving in California face an uncertain future,” Spencer said, as reported by Land Line.

“California has provided no guidance to owner-operators about how they can work as independent contractors under this new scheme, and truckers will be at the mercy of the courts to interpret how the law will be applied.

“For truckers that have invested their blood, sweat and treasure to create their own businesses, it is dismaying that lawmakers and the courts are forging ahead with this radical policy that dismisses a beneficial business model that has been in place for decades. At the same time, we know this will not be the last word on the legality of AB5 and expect to participate in future challenges to the law.”

The statute, which was pushed by organized labor to clamp down on the hard-to-unionize gig economy represented by companies such as Uber and Lyft, was enacted, in the words of supporters, to help workers by preventing their “misclassification.”